Syrcas Feast Review: Was the first performance at Pontio itself a high-flying success?

Between the 17th and 25th of July, the circus came to town. This was no ordinary circus, but a feast of circus themed events organised by Pontio, taking place at various fixed and improvised venues around Bangor.

The headline event, ‘FLOWN’, was an award winning modern circus show housed in a traditional big top on Beach Road, with 10 performances given over the course of the week. The show opened with a satirical monologue pointing out shortcomings of the previous night’s performance, letting the audience know that this was not your typical circus show. The pace soon quickened when a set of stage lights came crashing to the floor with a member of the cast attached, not an accident, but an indicator of the quirky and original show to come. 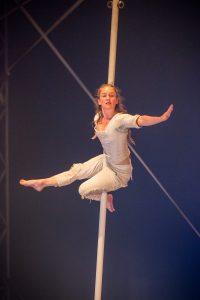 The audience were treated to high energy acrobatics interspersed with comical monologues, all set to a live soundtrack performed by the multi-talented cast. The human counterweighted pulley system used to smoothly raise and lower performers as they flew around the stage set on various pieces of equipment was a real novelty and fascinating to watch. Whilst watching the main performer, your attention was often drawn by the impressive skill required to perfectly time the counterbalance move. Other highlights of the show were the tightrope walking (and balancing on it with two legs of a chair!), the graceful swinging Danish pole act, and not forgetting the hauntingly beautiful original folky soundtrack. At times, the show was laugh out loud funny (the entry of a chariot pulled by a toy horse); at others, daring stunts made the audience collectively take a sharp intake of breath.

high energy acrobatics interspersed with comical monologues, all set to a live soundtrack performed by the multi-talented cast

The show culminated with a true test of the title Flown, with almost the entire case taking to the air including the musicians! The sight of a drum kit being played whilst swinging in the air was a truly unique spectacle. The show was performed to a full house, and the audience seemed to relish the quirky mix of acts presented by circus company ‘Pirates of the Carabina’.

‘FLOWN’ seemed to be, justifiably, a huge success and set a high standard for other circus feast events to live up to. I was fortunate enough to see two other live acts as part of the week’s events. The first, Kaboom / Hugo Oliveira, was a free pop-up event featuring a solo modern day clown. The act consisted of a series of sketches, in which the “inebriated” clown performed acrobatics and juggling feats within the confines of circular red mat that served as his stage. It was an entertaining, short, and sweet act set against the somewhat unusual backdrop of the water treatment works in Hirael Bay. 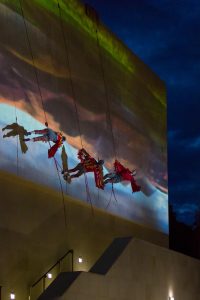 The second free event I attended was a vertical dance act ‘Porth’ performed, at night, on the outside wall of the yet to be completed Pontio building. This was commissioned by Pontio and created by Kate Lawrence (a Bangor University lecturer) and her Vertical Dance Company. Porth was a visual spectacle – three “dancers” suspended by ropes from the Pontio roof against a changing 3D backdrop projected onto the wall. The three, kitted out in winged vibrant costumes, interacted with the projections: soaring amongst clouds; jumping over chasms on a moving floor; dancing precariously on top of 3D towers. Set to a stirring soundtrack, this was a unique and mesmerising show and was well received by the crowd and surprised passers by.

The feast of events put on by Pontio during the circus week was a rare treat for the residents of Bangor and breathed some much needed cultural life into the city. Let’s hope that future, eagerly anticipated performances at Pontio reach the same high standard.

Photos: Flown by Pirates of the Carabina

Flown by Pirates of the Carabina. Performed in a Big Top on Beach Road in Bangor, Gwynedd 17-25th July 2015. Part of Pontio’s Syrcas Feast 2015