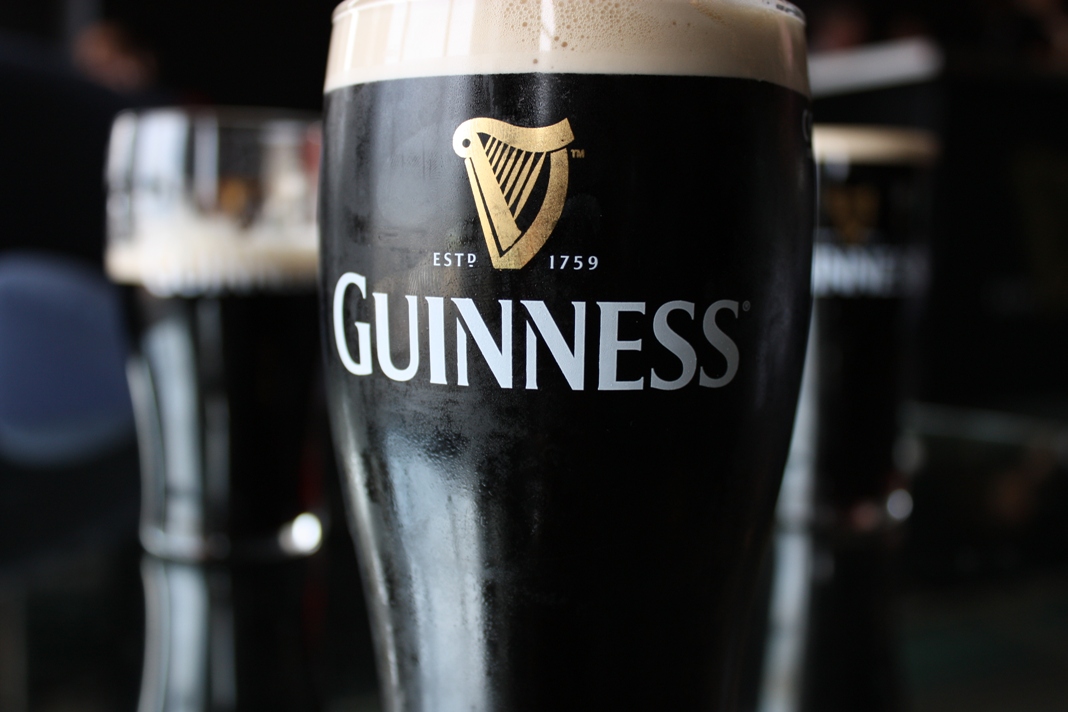 Ireland is famous for many things including mythical Leprechauns, shamrocks and potatoes. But arguably the most popular thing to emerge from Ireland in its history is a dark, dry stout known as Guinness. St Paddy’s Day has been and gone for this year but why not prolong the celebrations by reading about the fascinating history of this iconic beer?

It all started in 1752 when Arthur Guinness inherited £100 from his godfather, Dr Price, aged 27. He chose to spend his inheritance setting up his own ale brewery in Leixlip, County Kildare where he began perfecting his craft. At the end of 1759, Arthur decided to leave his home and relocate to the capital city of Dublin. When he arrived, he signed a 9000-year lease at £45 per annum on a dilapidated brewery at St. James’ Gate. Yes, this was truly where it all started! By 1761, Arthur was married to Olivia Whitmore and the pair went on to have 21 children in total, 10 of whom lived to adulthood.

Fast forward 8 years to 1769 – this was the year where Guinness first exported his ale to England (6 and a half barrels to be exact). In 1778, Arthur started selling his dark beer called ‘London Porter’ which was a hit with Dubliners and in 1799, he decided to stop brewing ales all together so he could focus on perfecting his signature bold, black beer. A couple of years after in 1801, Arthur Guinness brewed his first ever West Indian Porter; a precursor to Foreign Extra Stout which is still enjoyed on a global scale to this very day.

Arthur Guinness died at the age of 78 in 1803 and following this, his son Arthur Guinness II took over the brewery. In the early 1800s, Guinness beer started to be exported on a global scale, despite most Irish breweries being satisfied with domestic sales and early sea crossing being logistically difficult. The beer reached Europe, Africa, the Americas and even New Zealand. Arthur Guinness II handed over the brewery torch to his son Sir Benjamin Lee Guinness in 1850, who was in charge when the famous Guinness trademark label was introduced. The logo beared Arthur’s signature, the harp symbol and of course, the Guinness name.

Major changes to the brewery site itself came from 1868 onwards under the leadership of Edward Cecil. St. James’ Gate had almost doubled in size, containing its very own railway system, as well as a medical department, fire brigade and cooperage. Furthermore, Guinness hired its first university science graduate in 1893 and by 1901, the first Guinness research laboratory was up and running, as well as an experimental brewhouse. It was unheard of for scientists to be working in the brewing industry at this time, making this a major move for the fast-growing company.

In 1927, Rupert Guinness, 2nd Lord Iveagh took over as chairman of the company. Guinness released their first press advertisement for their beer in 1929 with the slogan ‘Guinness is Good for You’, which went on to be a success. Following this, John Gilroy, a talented artist was enlisted to illustrate the ‘Guinness is Good for You’ and ‘My Goodness, My Guinness’ campaigns. 10 years later in 1939 (the year that marked the start of WWII), all British troops in the British Expeditionary Force in France were gifted a bottle of Guinness to accompany their Christmas dinner as a ‘thank you’ for their service.

The company continued to grow and in 1959 a ground-breaking development occurred. Michael Ash, a Guinness scientist, created the world’s first nitro beer which later became known as ‘Guinness Draught’ – a legendary beer which is still to this very day a pub and restaurant staple. The brewing of Guinness went global in 1963, with Nigeria becoming the first country outside of the UK and Ireland to brew its own dark stout (aka Guinness!). In 1988, the Guinness team created the first ever widget for its canned product, which helps the beer retain its smooth and creamy taste.

The former fermentation plant at the St. James’ Gate Brewery was transformed into a seven-storey interactive experience bringing the story of Guinness to life in 2000; an attraction that is still popular among tourists and locals today. Our story ends in 2009 – the year which marked 250 years of Guinness! And what better way to celebrate this momentous occasion than by naming the anniversary after Arthur Guinness, the original mastermind behind the beer we all know and love today.