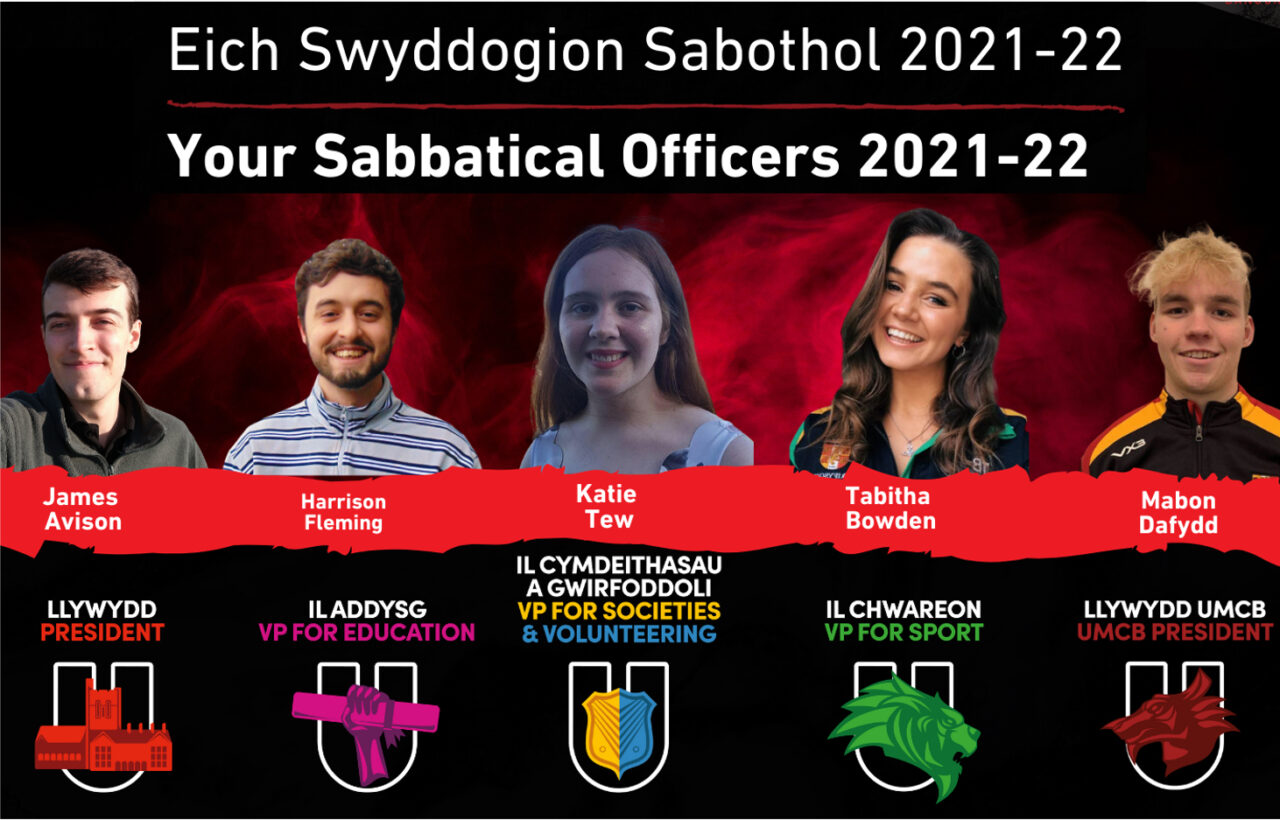 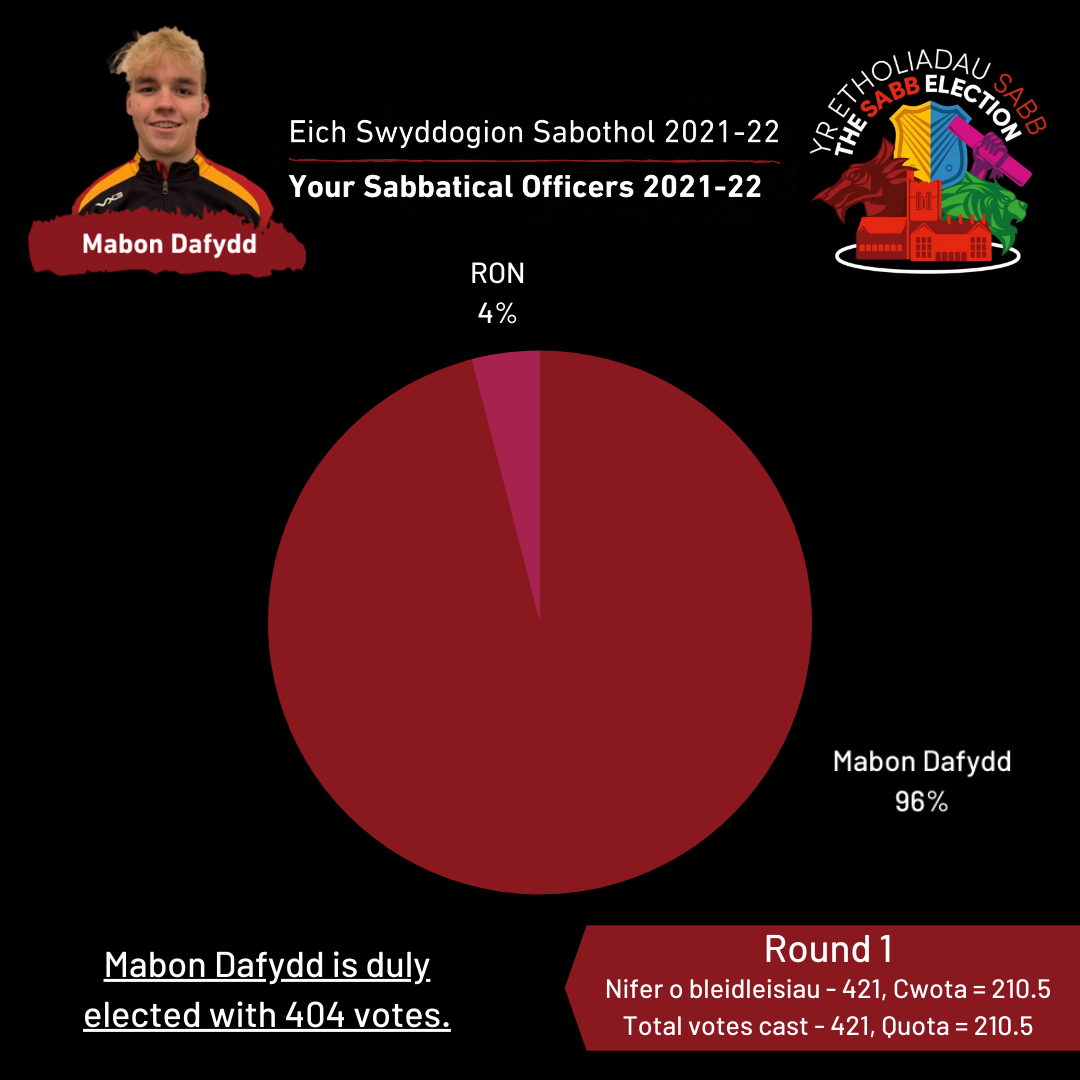 You have spoken and your Sabbatical Team for 2021/22 have now been chosen! A total of 2254 voters participated in this year’s election – a new record, despite the challenges the candidates have faced as a result of the pandemic. A total of 25 candidates campaigned tirelessly from 8th March until the 12pm deadline on 19th March for your votes, with the results being announced live on Facebook at 4pm the same day.

The first result to be announced was the role of UMCB President. Mabon Dafydd, the lone candidate, required a quota of 210.5 votes to secure the role. He received 404 out of the 421 votes cast.

VP for Societies and Volunteering 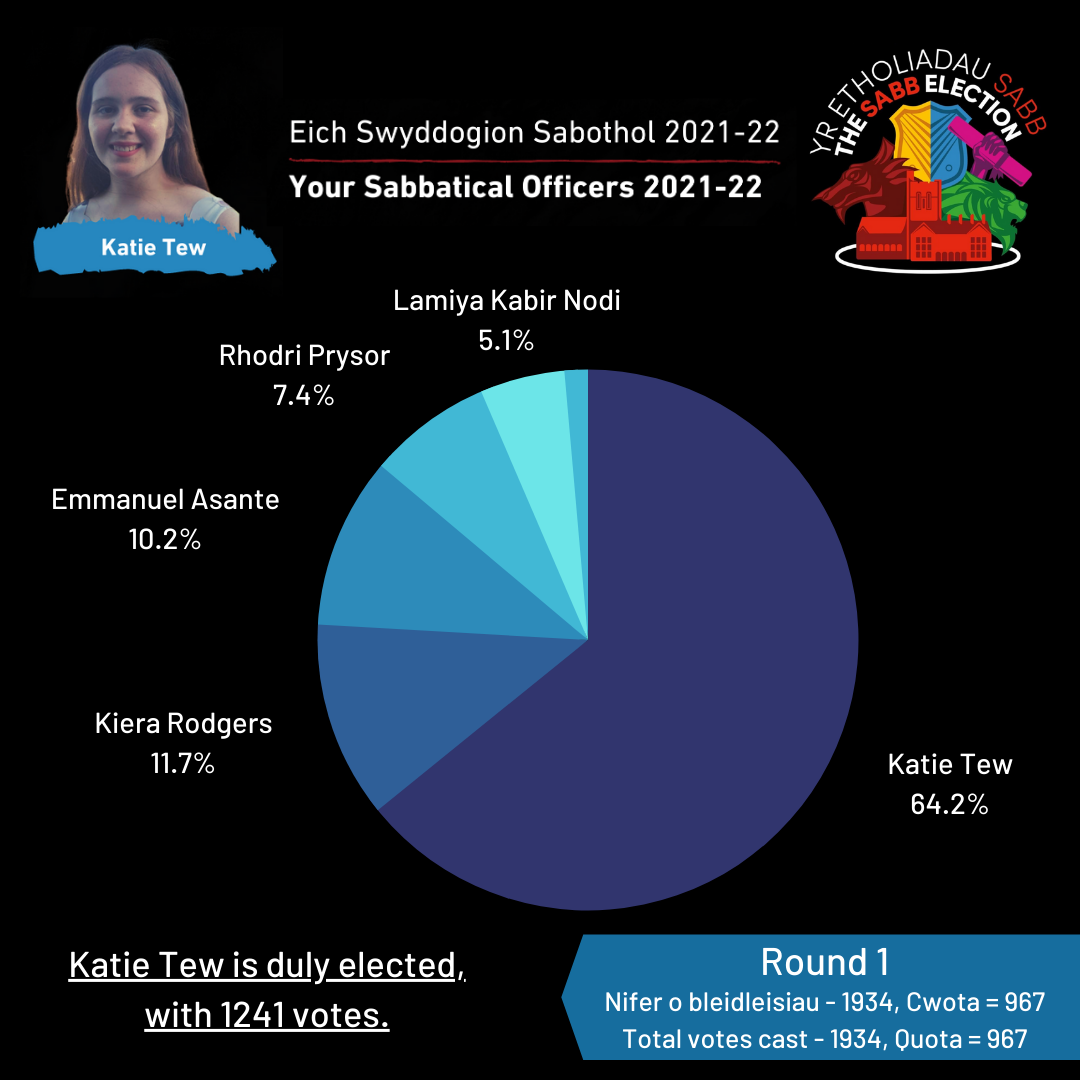 Next was VP for Societies and Volunteering. 5 candidates ran for this position, including the current title holder, Katie Tew. A total of 1934 votes were cast, with a quota of 967 required to secure the win. The election saw Katie Tew win a landslide victory over her fellow candidates, taking 1241 votes out of a possible 1934. Speaking about her win via Facebook live, Katie said “to be elected the first time means that you believed in me, but to be elected a second time means I represented you, and it means that, it means so much”. She goes on to say that although “this year has been challenging for our societies and volunteering projects, [she’ll] ensure that [she]will continue to represent [the students of Bangor University]”. 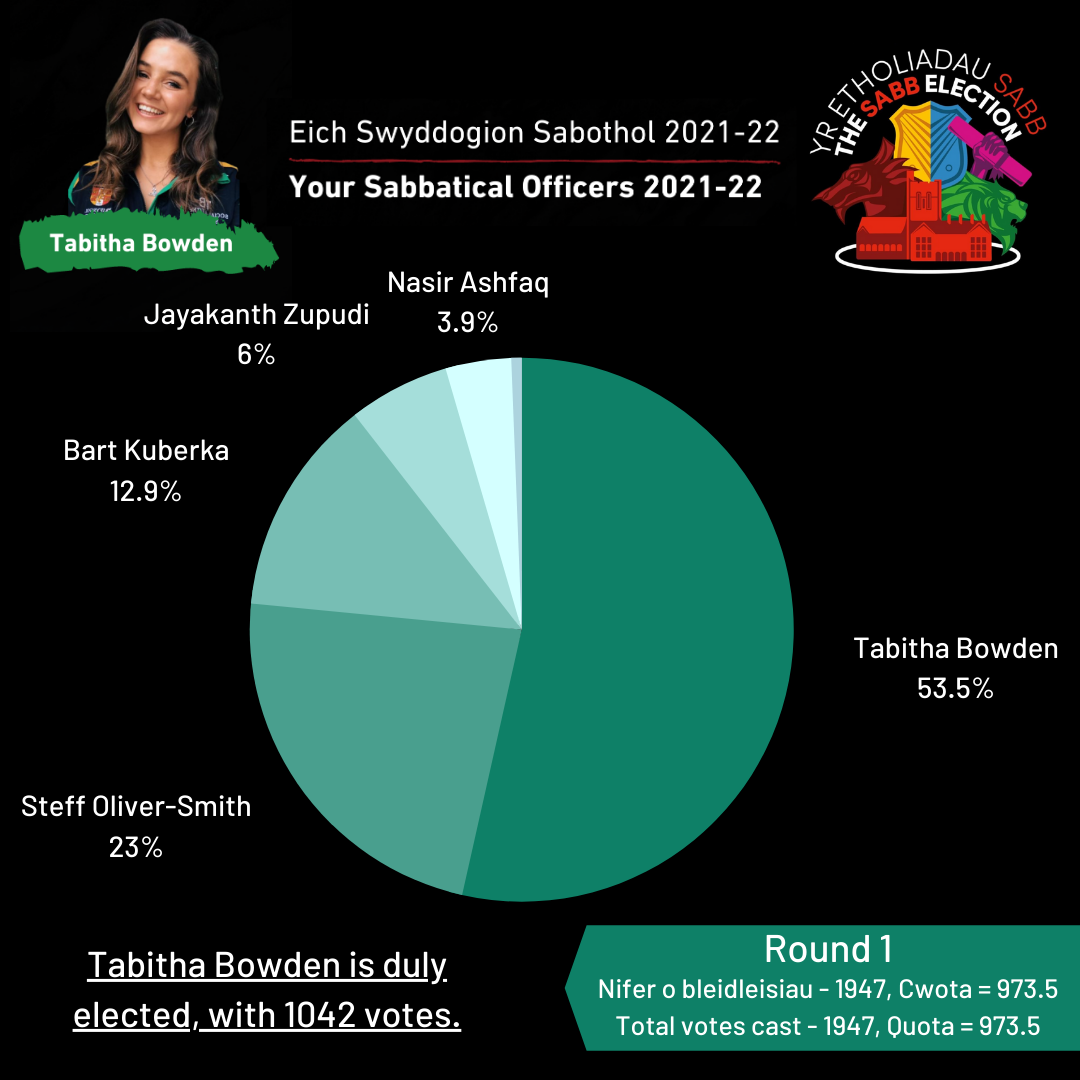 Following this, VP for Sport was announced. Again, 5 candidates ran for this position with a total of 1947 votes being cast and a quota of 973.5 votes required to take the win. After only one round, Tabitha Bowden, otherwise known as Tabs, came out on top securing 54% of the vote. Tabitha seemed overjoyed by her win, explaining how “it doesn’t really feel real at the moment”, and expressed how pleased she was that “everyone liked her cringy videos” that played a key part in her successful campaign. 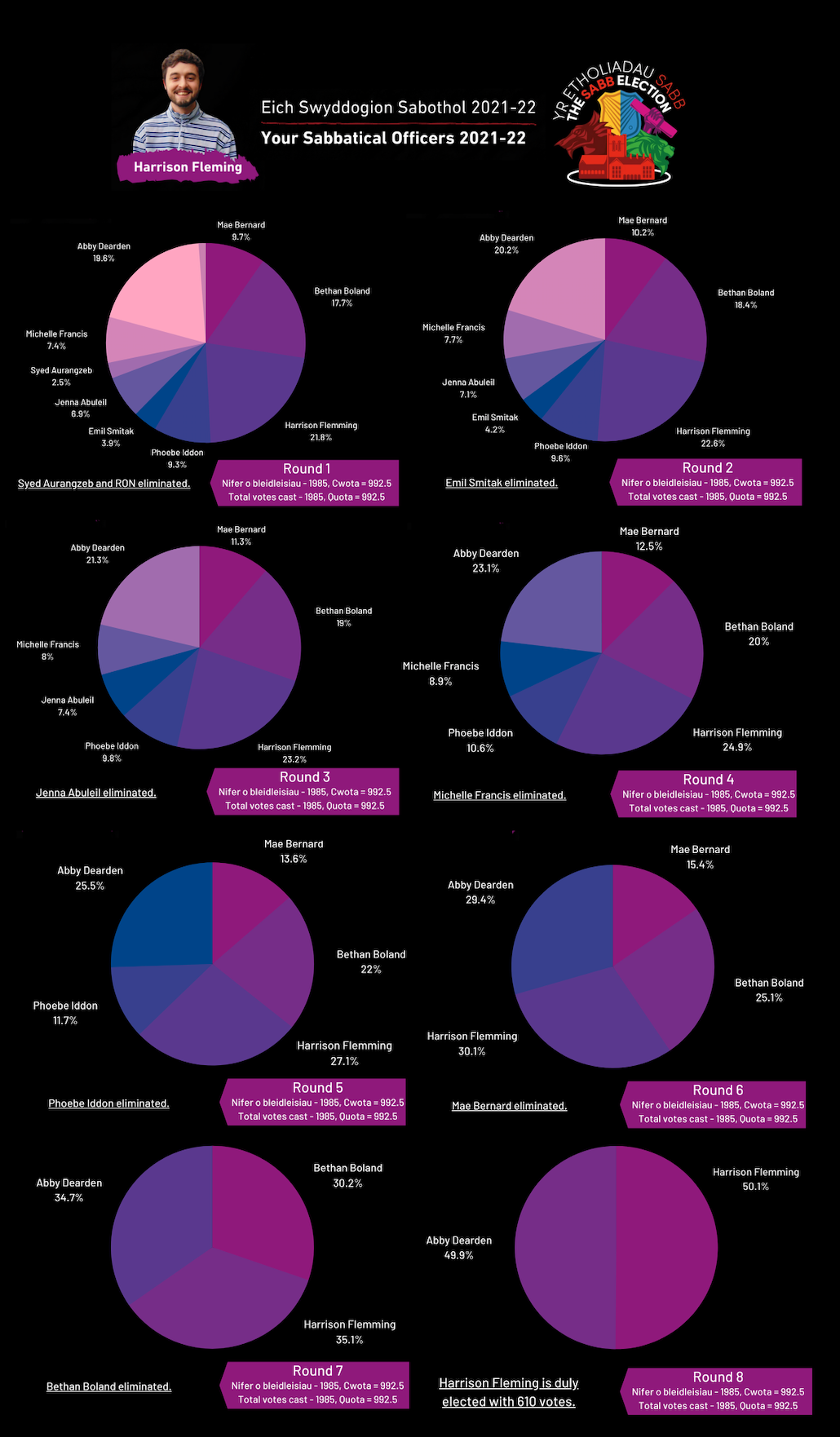 The announcement of VP for Education was by far the most nail-biting affair of the Facebook live broadcast. A total of 9 candidates ran for this SABB position, with front runners Harrison Fleming and Abby Dearden fighting it out until round 8. In the end, it was Harrison who was elected, winning by only 3 votes. Following some technical issues and a phone call with Tabs, we finally heard from a sore-throated Harrison who explained that “a lot of screaming had been done in the house” to celebrate his victory. He went on to thank everyone for voting, and congratulated all of his fellow candidates on their “superb campaigns”.

The final, and highly anticipated position to be decided was President. The first round of votes saw Iwan Evans, current UMCB President, and James Avison, current VP of Education, leading the pack, with 644 and 907 votes respectively. Following the elimination of Thomas Burnett, Sam Wright, Lloyd Chambers and RON, the results of round 2 were announced which saw James crowned as the new President of the SU, beating Iwan by 275 votes. James was “a bit lost for words” following his election, explaining how he “was almost certain [he]was going to lose” after watching the other positions being announced first. He went on to say that he was “massively grateful to the student population for having faith in [his]policies and what [he’s] done this year” and hopes to make “everyone proud” as Bangor University’s next SU President. 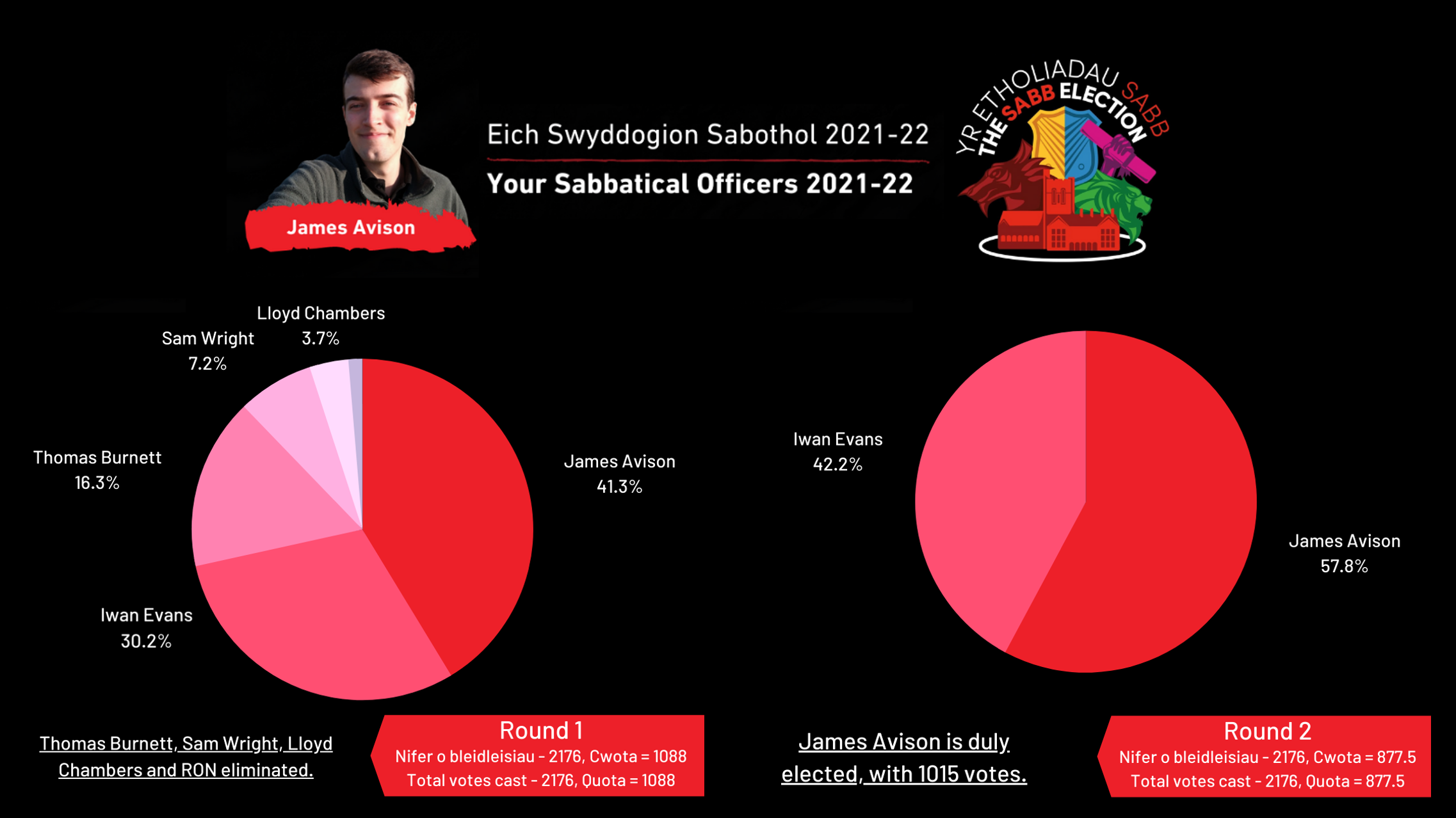