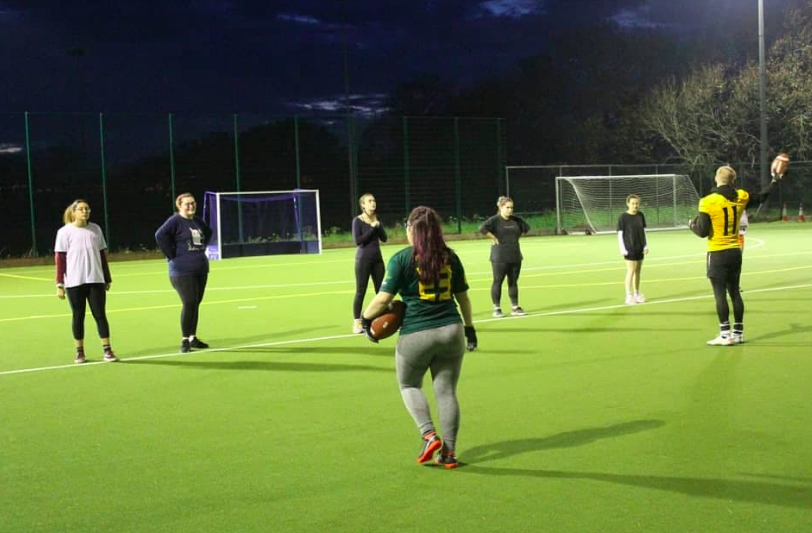 When I was first dared to take part in Bangor Muddogs’ American Football ‘This Girl Can’ Training session in 2017, I laughed. I had no idea what the sport entailed, and I made this preemptive decision that I would never be strong or fast enough to participate. Fast forward to 2020, I am a committee member for Bangor Muddogs. Accepting the dare from my friend and joining the training session is still to this date the best decision I ever made. During the past three years, I have learnt so much about the sport, made many friends and seen my confidence grow. I have had so many opportunities during my undergraduate degree to get involved with other American football teams. For instance, whilst studying abroad I trained with Joensuu She-Wolves Women’s American Football team in Finland. As well as training abroad with Joensuu She-Wolves, I also took part in some of the Rookie training sessions with Cheshire Bears in 2018/2019, and Peterborough Royals in Summer 2020. I hope this article can share how a male dominated sport is becoming more available for women and girls in the U.K. 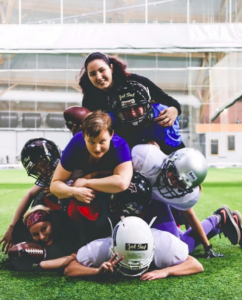 When I tell people I play American football, most assume there is a University team solely for women and seem surprised when I correct them by saying it is a mixed gender team. I believe it is important to break these gender stereotypes, especially in 2021 – girls and women can enjoy American football. There are so many benefits to the sport, both physically and mentally. The best thing about American football is there is a position for anyone, regardless of size, gender, ethnicity, age, and disability. American football is a sport which is finally challenging racist, homophobic, and sexist discourses, by making it more accessible to those who may have been previously discriminated against. 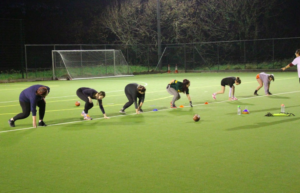 At university, I train as an outside linebacker. This is a defensive position, which has the dual role of defending the run and the pass. A linebacker may also play a blitz. A blitz is when the linebacker acts as an extra pass running into any exposed gap, to try and get the ball off the quarterback. If the linebacker tackles the quarterback with the ball, it is known as a sack. Regarding training with women’s teams, I enjoy training as a linebacker and on the defensive line. The defensive line (commonly referred to as “D-Line”) is one of the most underrated positions to play in American football. Firstly, it is the defense’s team’s first line of defence against offence. Typically, players who are on the D-Line are perceived as big and strong, which is interesting since I love this role, despite being 5ft 1! The purpose of D-Line is to line up against the offensive line and to shed blocks off offensive lineman and tackle ball carriers coming through the line. Usually, there are two Defensive Ends (DE) on either side and one or two Defensive Tackles (DT).

When I started training with the Bangor Muddogs, there were eight other women on the team, all who played various positions across offence and defence. It was amazing to know and train with such friendly talented girls, and I admired their commitment to the sport. Currently, there are six women on the team including myself. I am so proud this year how many girls are interested in the sport and I hope more students will take part in the sport. Late in 2020, before the increase of restrictions due to the Covid-19 pandemic, we were able to successfully hold a socially distanced ‘This Girl Can’. I was so impressed by all the students who came to participate, and to see so much talent from a group of individuals made me feel proud that so many people want to get involved with the sport. I believe last year’s ‘This Girl Can’ showed the highest numbers of participants I have witnessed, which shows an increase of women interested in American football which is amazing news! I hope that this effort for inclusivity will continue the growing interest to play American football. I hope to see more women and girls interested in American football and other male-dominant sports.

Is it dangerous? This is one of the most asked questions I hear. I believe American football is as dangerous as any other sport. Accidents happen (like when I broke my wrist), but if you are taught technique properly, such as blocking and tackling, the probability of injuries will be low. Sometimes there is a misconception that women and girls are more likely to get injured during mixed gender contact sport. There is no long-term research to suggest this, although I would argue your gender does not make you more prone to injury. The risks would be the same for all players taking part in the sport. If you do want to start playing American football but are worried about the injury risks, I would still recommend joining your local or university team, as they will be understanding of your concerns and will train you from a basic ‘walk through’ level. You will never be thrown in the deep end. Sometimes walking through game play can be very useful. Also, learning how to block and tackle slowly and through step by step instructions can help with confidence. If this helps, I have been tackled many times by lads over 6ft tall and because the technique was safe, I did not get hurt. 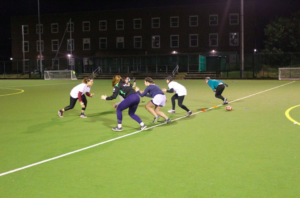 What has changed in the past decade?

(National Football League) NFL changes: Super Bowl LV where Kansas City Chiefs played against Tampa Bay Buccaneers saw the first woman to officiate on Super Sunday. In addition to this, the Tampa Bay Buccaneers have two female assistant coaches. Regarding College football in America in 2020, Sarah Fuller became the first woman to play in The Power 5, as a kicker. Fuller then became the first woman to score in The Power 5 game. Fuller said after the game “I just want to tell all girls out there that you can do anything you set your mind to”. Preach it sis! This shows how, although small, this type of progression gives women and girls interested in American football a voice on an international level.

If you have any more questions about American football or want to know more about how you can join a team, please email me at: sou1ca@bangor.ac.uk.