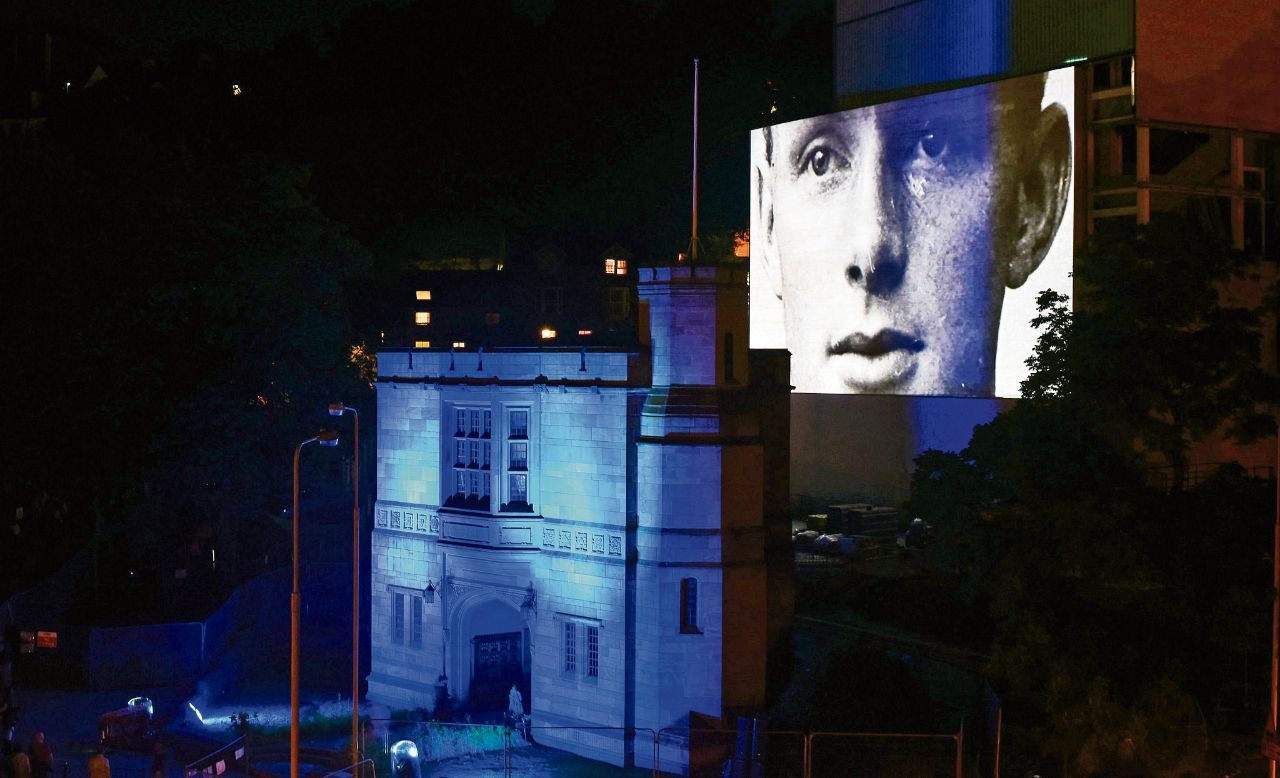 On Monday 4th August 2014 lights went out all over the UK to commemorate 100 years since the outbreak of the First World War. As a part of this Bangor’s Pontio has teamed up with Artes Mundi – an international arts organisation based in Wales. Established in 2002, Artes Mundi is committed to supporting groundbreaking international contemporary visual artists whose work engages with social reality and lived experience – they held ‘Lights Out Bangor’, a outdoor public artwork titled ‘TRAW’ by Bangor’s leading visual artist Bedwyr Williams.

Bedwyr Williams lives and works in North Wales and his work takes many different forms, including installation, performance, drawing, sculpture and increasingly film. The visual included the names of over 8,500 soldiers, sailors and airmen, projected onto the wall of Pontio just behind the site of North Wales’ Memorial Arch to celebrate the lives of men from North Wales who gave themselves for the future of our country, so close to the university where bright futures are moulded everyday.

Williams made sure to exclude all references to rank and status in this display, cropping uniforms out of images to focus solely on faces of the men to highlight the personal sacrifice made by the brave men, rather than as just one of a number. The images were projected alongside the slow ticking of a clock counting down right across the city; ‘Traw’ in Welsh means ‘to strike’, just like the clock that sealed the fate of these same men 100 years ago.

Williams commented: “As a young art student I walked past the memorial arch in Bangor many times and I have to admit that I never gave it a huge amount of thought. Working on this project I’ll never be able to walk past this place again without thinking of the lives lost fighting in the First World War.”

‘Lights Out Bangor’ was part of a nationwide campaign 14-18 NOW – the cultural programme for the First World War centenary commemorations which had events in all major UK cities such as Belfast, Edinburgh, Bangor and London. Williams is one of the four international artists commissioned by the programme to produce an artwork that creates a light source that unites the people of Great Britain.

Bedwyr Williams is Pontio’s first resident artist and is currently working on a piece for their grand opening, gaining inspiration from the Universities archives; Crossley Holland and the Natural History Museum. He will be producing a film which will air in Pontio’s new cinema in November.

Pontio’s Artistic Director said “Pontio, Bangor University’s soon to open Arts and Innovation Centre, is ideally positioned to host Bedwyr’s bold new work to mark the Centenary. Sandwiched between the city’s Memorial Arch and the iconic University building – the striking projections against Pontio offer an appropriate and timely reminder of the passing of time since WW1.”

The local community were invited to a series of workshops that aimed to gather personal stories and family connections. This kind of public activity is one of the many ways Pontio aims to reach out and benefit its community in the coming years.