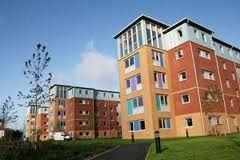 A local dog walker has thanked the quick thinking of a Bangor security guard for saving his life following a heart attack he suffered whilst walking across the Bangor University football fields.

Trevor Roberts, 67, was spotted by security guard Robbie Williams when he collapsed on the football field, before he received vital, emergency first aid prior to the arrival of the paramedics. Mr Roberts was then taken to Ysbyty Gwynedd.

As he recovered Roberts, a father of four, and grandfather or nine, said that he was “not feeling too bad. I’m very grateful to the lads for saving my life. I wouldn’t be talking to you now if they hadn’t helped me”.

Now lucky Mr Roberts can look forward to celebrating his 68th birthday with wife Nancy following his ordeal on the Bangor University Ffriddoedd Site at 8am on the Monday morning with Golden Retriever Jake.

Looking back on his heroic rescue Mr Williams said “I noticed a lone dog on the sports pitch. I thought it was unusual so moved closer to investigate and saw the shape of a person lying on the ground. I checked the man for vital signs and found he wasn’t breathing.”

Security Guard Mr Williams, promptly administered chest compressions and mouth-to-mouth resuscitation before using his radio to call for back-up and the emergency services.

Mr Monument said “All the university’s security staff are trained in first aid, but to be involved in saving someone’s life is a very rare occurrence. It highlights the importance of having a basic medical knowledge. An incident such as this makes all the training worthwhile.”