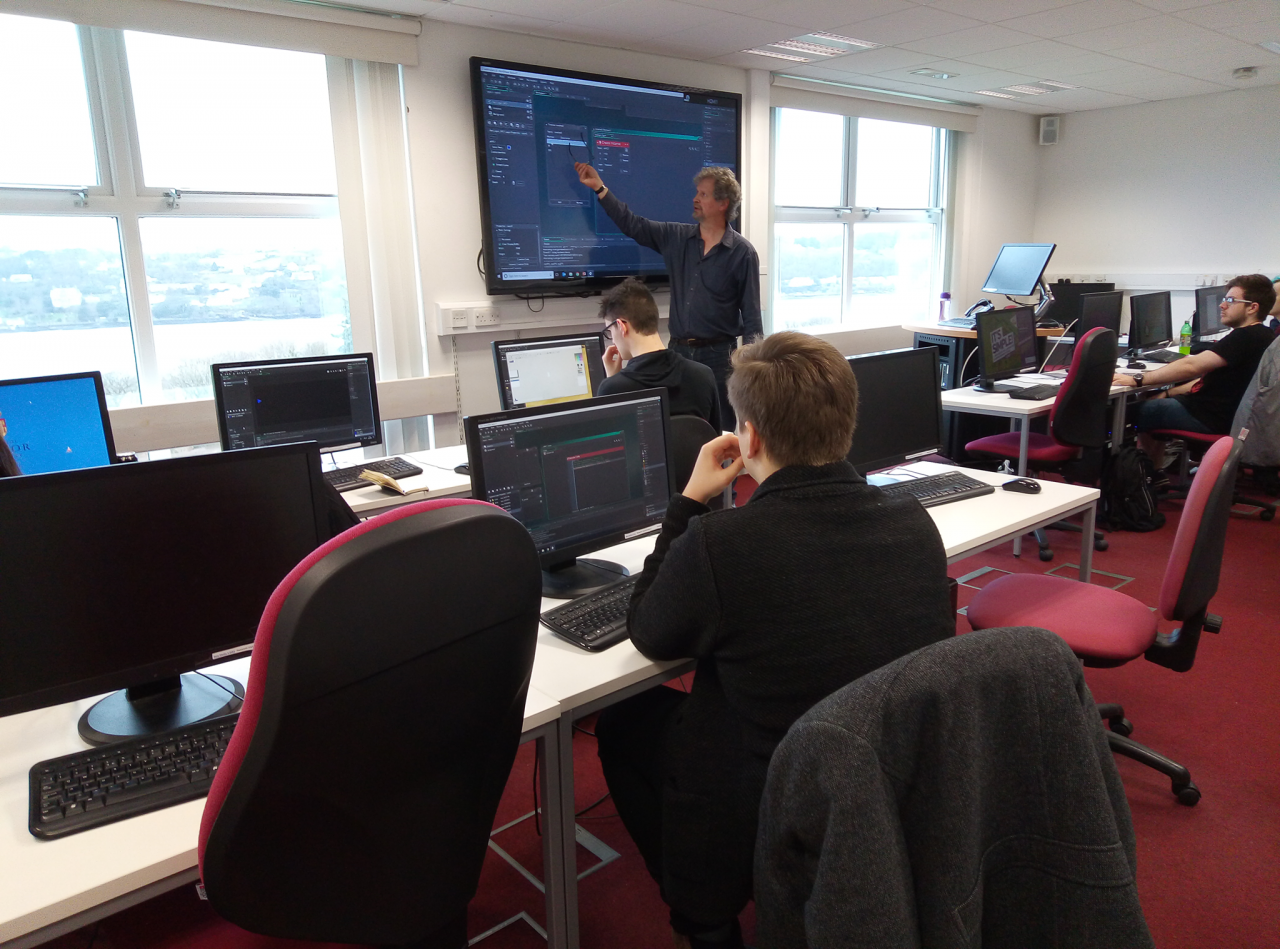 Folklore, mythology and film studies; German studies. These are probably not the first words that spring to mind when thinking of designing games. But perhaps they aren’t as far removed as one might think. These are the respective PhDs of Dr Eben Muse and Dr Melissa Kagen, the professors at the head of Bangor University’s ‘BA with Game Design.’

And the course is fresh out of the gates! Consisting of six modules over three years, the program has only now completed three semesters – halfway. Muse and Kagen share an ambitious goal – in three more semesters, they hope to see the first round of students equipped with all of the tools necessary to launch their own game studios. Potentially, they hope to see a game studio spring ready formed from the final year of the course.

Dr Muse is leaning casually in his chair, in his office in John Philips. He’s the Head of School for the School of Creative Studies and Media, and he’s been teaching in Bangor for a decade. He has a confident, deep, American voice.

‘Have you heard of Orson Welles? He made a film called Citizen Kane. He said his film was his train set,’ said Dr Muse, ‘We want to give students their train set.

‘The goal is not just to learn technology. Technology is easy. It is to use technology creatively.

‘In the industry what they desperately need is creative people who can talk techy.’

From programming to game theory to marketing, both professors place the emphasis of the course around every person within a studio- and on putting those people together.

‘We do it very differently from other universities. You may make a game – or you may work in the industry.’ said Muse.

‘I don’t think it would be good to churn out three indie studios a year. I want students to be familiar with different roles they could play.’ said Dr Melissa Kagen.

She has her office right next door to Muse’s. She’s only been in Bangor for a little over a year and a half though- she came to work on this course. While Dr Muse focuses more on the practical design sections of the course, Melissa is an expert on game theory. She exudes a positive and upbeat attitude, and an even stronger US accent. Asked if there was anything that was creating difficulty in the course so far, her answer was immediate: not enough modules.

‘It’s pretty quick. Students have to drink from the firehose,’ she said.

‘Anytime you start a new program it obviously goes a little differently than intended. We’re doing a lot of combining of theory and practice, which can be challenging for students.’

‘It would be good if there was one more module.’ said Muse, but with his mind on a different issue.

‘The trick has been, and has always been, merging the computer science students with our students [from the creative department].’ he said.

‘A lot of students prefer one or the other.’ said Kagen.

Both hope that the course will eventually rise to become a joint honours, or fly under its own power. Dr Muse has been teaching optional game design modules for ten years, but only last year did the university muster the resources to create this real course.

‘He [Dr Muse] wrote the documents for validation. A lot of this really is his brainchild. I want to give him credit for that.’ said Kagen.

She and Muse both turned towards gaming and digital storytelling while working on their aforementioned PhDs. Dr Muse pointed out a hefty case sitting behind me – the computer which he used to write his dissertation, and explained how writing code captured him.

‘I got into programming when working on my dissertation. When I was ready I would click a button and my story would come to life. More so than film, more so than anything.

‘I came to Britain with no job. Nobody wanted an American film expert, so I started to focus more on the programming.’

When asked what her PhD was in, Dr Kagen answered ‘German Opera!’. She was expecting my surprised expression.

‘I was directing a lot of opera and started directing it interactively. Complete logistical nightmare, three orchestras – so fun.’ she said. It was from here that she became interested in interactivity, and later, put her in contact with Bangor and Dr Muse.

‘I love a lot of things about Bangor. It feels a bit isolated, having come from a big American city- but Bangor revolves around the university and the students, that’s why I’m here.’ she said.

But student-centric as the town may be, the university itself has been the centre of controversy. Among the proposed cuts, and the uncertainty it has created, neither professor can predict the future of the course with certainty. It’s going well, students enjoy it, and it’s on track- but what’s to come is in the air. Dr Kagen summarised the situation:

‘No one knows what any of the departments are going to look like in a couple years. There’s a lot of craziness in Bangor. I think we all hoped this year would be calm.

‘It’s hard to plan for the future if you don’t know what it’s going to look like. You can’t build programs without something to build on. We hope for the best, hope for stability.’