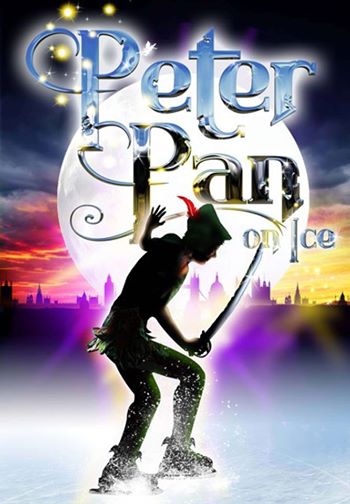 Recently, Seren was invited to attend a performance of Peter Pan on ice at the local theatre, Venue Cymru. As an occasional writer for the paper, I jumped at the chance to be the one to go and review the show – I absolutely love the story of Peter Pan and what could be more magical than telling that story on ice. I managed to convince one of my colleagues to attend with me, partly for a second opinion but also because I had a strong suspicion that I might be sobbing during the performance and a girl cannot be left to sob in a theatre alone.

We arrive at Venue Cymru with minutes to spare but thankfully the helpful staff showed us quickly to our seats and we made it in before the show started. I was pleasantly surprised to discover the auditorium was relatively full considering the mid-week performance date and the audience ranged from really young to old. I was so excited…The lights dimmed, the music started and I prepared myself to be taken on a magical journey right back to my inner child.

The opening scene started well and I was surprised so see that there was actually real, genuine ice on the stage. Rhys had asked me on the way there where the ice would come from – he was adamant it was going to be called ‘ice’ but that cast would in fact be on roller skates. Oh ye of little faith, I knew Peter Pan would not let me down.

A few minutes in, the tale started with one of the performers who I assumed was playing JM Barrie, the author of Peter Pan. I eagerly awaited the voice of the narrator, to tell the story of how Wendy, John and Michael came to find themselves in Never Land with Peter Pan and TinkerBell.

Ten minutes later, although I could not fault the skating one single bit, (in fact, although I am no expert I would say it was world class) I was slightly disappointed that there was an ‘author’ who occasionally skated onto the stage, took off his jacket and top hat, had a bit of a dance with the children’s distraught mother and then passed her back to the equally distraught father (who by this point was probably more worried about loosing his wife to JM Barrie than his missing children!) but not once did he utter one single word. I mean, WHERE WERE THE WORDS? This was not what I had expected at all.

Now, despite my initial disappointment at the lack of words, I wouldn’t say that I didn’t enjoy the show; in fact, the more characters that came onto the stage, the more I enjoyed it. There was certainly no shortage of talent in the Russian ice-skating company, from the main characters of Peter, Wendy and TinkerBell all the way through to the Native American Indian, the lost boys and even Peter’s shadow. (Although it did take a couple of seconds to figure out who the guy with the tights on his head was!) But, I will be honest, I did miss the words. Now, I’m not saying every character had to have a full on conversation with each other, but a few scene setting words from the ‘author’ would have been nice and added to the ambience the ice-skaters were creating.

What I did love about the show was the ability for the cast to bring humour to the stage, without any words at all (of course!) I loved Captain Hook and his crew – the buzz that the pirates created on stage was fantastic, considering the little space and props they had. Tinker Bell’s skating technique was outstanding; she really pulled off the flirty, lustful side of the fairy. There were several points throughout where I was left open mouthed and there was no shortage of applause throughout both act one and two.

However, I have to be honest, my favourite part was most definitely the crocodile. Not only was it amazing to see a person skating in a full on crocodile costume, when said person began to do the worm, in said costume, across a stage of ice, you can’t not applaud. If only the crocodile could speak!

Would I recommend the show? Yes, I would. Did I miss the words? Yes I did. Do I now have an undying urge to go and take up ice-skating? Erm… Would you believe me if I said ive already got my first lesson booked.

Watch out Wendy, you’ve got some competition.

Where Can I Watch Plays or Musicals Online?

101 Things to Do While in Self-Isolation

Thespianage in Pontio: An Interview with Antony Butcher