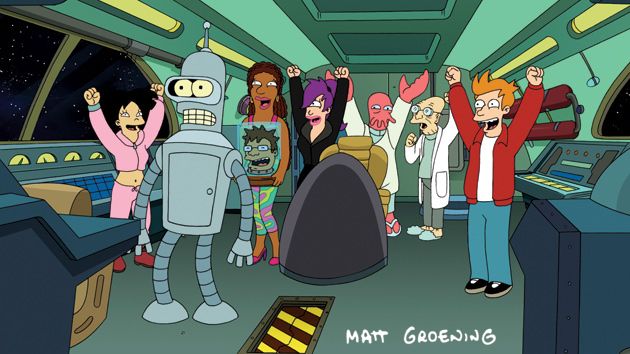 Thomas Bickerdike –  Futurama
The futuristic cartoon from the creators of The Simpsons. On 31st December 1999, Phillip J. Fry, a 25-year-old delivery boy, is accidentally cryogenically frozen and wakes up 1000 years later in the future. He goes to work for the Planet Express Corporation, an intergalactic delivery service. Fry’s colleagues include Leela, a one-eyed alien ship captain, and Bender, a robot who specializes in bending and drinking. It offers a very unlikely, yet amusing, look at the future, including the idea of famous people’s heads being kept alive in jars. Plus, who can’t like a character as bizarre as Doctor Zoidberg?

Will Johnson –  Torchwood
The spinoff sci-fi genre is known for its flops but Torchwood became the exception. This gritty, sexy and violent show sprung onto our screens in 2006 with Russell T Davis, the man who rebooted doctor who, at its helm. With an immortal Captain Jack Harness (John Barrowman) heading up the Cardiff branch of anti-alien taskforce the series take a varied range of storylines. From aliens which will kill you via sex to the planet being held to ransom and children as the price, culminating in 2012 with the 10 part “Miracle day” which asked what would happen in a world without death.
Although new episodes are planned a released date has not be announced.

Nicola Hoban – Firefly
Firefly is one of those completely brilliant sci-fi shows that television has had the privilege to be graced with. Created by the genius that is Joss Whedon (Buffy the Vampire Slayer, The Avengers, do your research!), Firefly is a space western television series that, set in 2517, follows the renegade crew of ‘Firefly-class’ spaceship ‘Serenity’ after the human race repopulated to a new star system. Cut short in its prime after only one season by the abomination that is Fox, the show still managed to develop a loyal fan base that had fallen in love with the show, so much so that after its cancellation their devotion and support for Firefly persuaded Universal Studios to produce Serenity, a feature film which tied up all the loose ends which Whedon hadn’t had the opportunity to develop in depth yet.

Bradd Farnsworth – Lost
Lost was not only an incredible TV show which revitalised the sci-fi genre, it was also a show which defined my early teenage years. Passengers on a jumbo jet mysteriously crash land onto a seemingly ‘deserted’ island. Finding out that they aren’t actually alone, the passengers must fight for survival on the island, which holds dark twisted organisations, mysterious ‘smoke’ monsters and shifts in time. For me, Lost was great because it was a show in which every episode was completely different, yet linked everything together perfectly. Packed with mystery and suspense, each episode would have me and my friends wondering ‘What’s next?’

Becki Watson – Red Dwarf
Red Dwarf is a cult sci-fi comedy that began back in 1988. It is set in the 22nd century on the mine ship Red Dwarf, where Dave Lister awakes after 3 million years in suspended animation to find that everyone on the ship is dead and he is (apparently) the last human alive. He’s kept company by Holly, the ship’s computer, a hologram of Arnold Rimmer, his old roomate, and Cat, a feline humanoid who has evolved from Lister’s pet cat. The huge popularity of the series has kept it coming back for more series over the years (the last one being in 2009 on Dave), and it’s easy to see why. With neurotic robots, shape-shifting mutants, and a sentient toaster, Red Dwarf will remain a sci-fi classic for many years to come.