The iPhone 5 Has Arrived 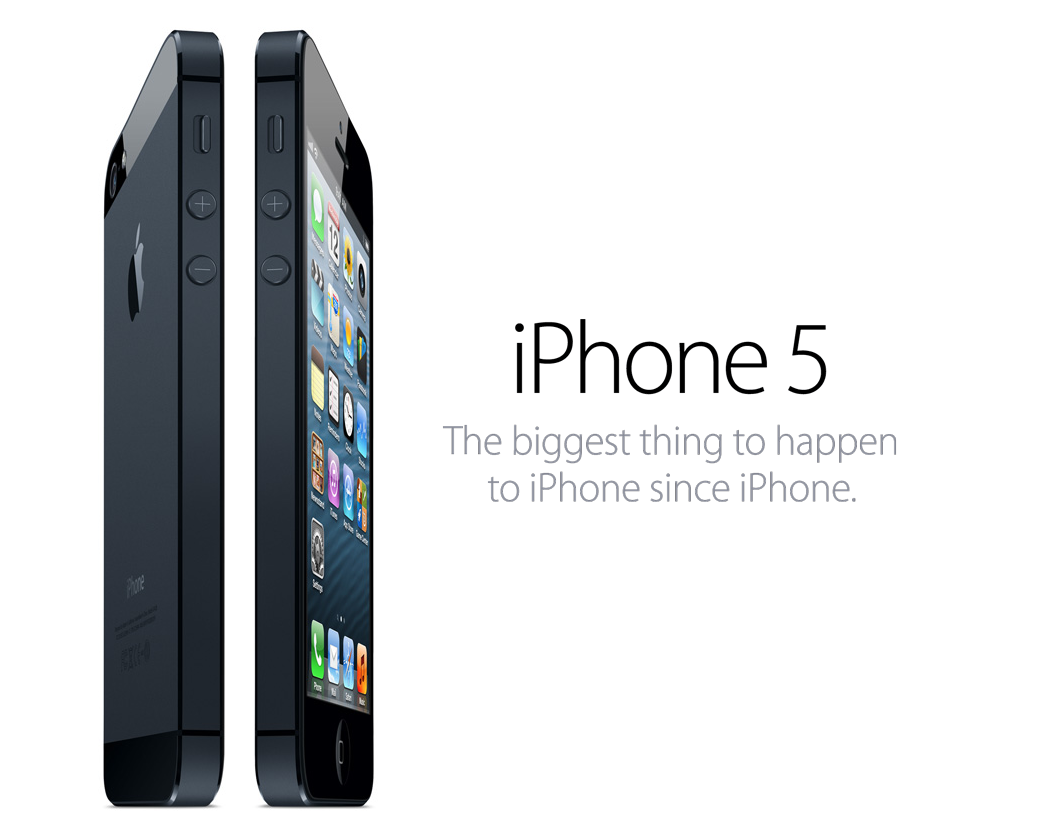 Rewind to 4th October 2011, Apple lover’s around the world are glued to their Mac’s, iPhone’s, iPad’s, even iPod’s as they watch livefeed’s coming out of the Apple Campus in California. Rumours were swirling that the multi-billion pound company were about to announce the next iPhone; assumed to be the iPhone 5. It wasn’t.

Less than a year later and we’re all back at our many Apple products watching another livefeed, again from California, where the iPhone 5 is actually going to be revealed.

The reveal was met with mixed reaction. In essence, Apple really haven’t done a lot to upgrade the iPhone 5 from it’s predecessor the 4S. Sure it looks a little bit slicker, its taller and there’s a few new features but nothing that warrants its price in the opinion of many disappointed fans.

So what exactly is new about the iPhone 5?

Whilst still the same width of the iPhone 4 and 4S, Apple opted not to make a phone that felt bulky, the 5 sports a new 4 inch screen making it the tallest iPhone yet. The new screen means that a whole new row of apps can fit on your home screen, you can see more emails on your screen, and in horizontal mode you can fit more days across your calendar display. The iPhone 5’s screen is around 9 millimeters bigger than that of the previous iPhone’s but Apple are keen to express that its not too big, its just right, as you can still type and doing everything with just one hand. This is, in my opinion at least, a good move on the California based company’s behalf as a lot of smartphones these days simply look obtrusive. That and they can rake in millions more with an extra 9 millimeters of screen added to their next iPhone no doubt!

The screen isn’t just longer, its new 326 pixels per inch retina display promises to stun. It has 18% more pixels than the 4S and Apple claim that you will no longer be able to make out individual pixels with your eye. Colours are also going to be 44% greater than the previous phones. One of the best parts about the new screen though has to be that you can finally sit back and watch HD videos without the annoying black bars at either end, also known as letterboxing.

The iPhone 5’s brand new A6 chip promises a lot faster iPhone all round. It increases CPU speed meaning that when you open apps, messages, emails they should appear instantly unlike with the slightly sluggish A5 chip in previous models. Graphics are also affected by the chip. With mobile gaming growing at a ridiculously fast pace it’s important for your phone to be able to handle the graphics and give you a higher frame by frame rates.

One of the biggest problems that consumers have encountered when it comes to iPhone’s is the battery life. Not only does it not last so long but unlike with other phones you can’t just buy a spare battery to replace it with if you run out. Phones are becoming more and more important in our lives every day with us not only relying on them for calls and messages but for calendars, emails, cameras and hundreds more applications and so its vital that our battery life at least gives us chance to get through the day. The new A6 chip will advance that weak battery life of previous iPhone’s and give you 8 hours talktime, 8 hours 3G browsing time and 10 hours video playback time.

Not long ago I remember seeing a mock ad for the iPhone 5 on the internet that basically showed a digital SLR going by the name of the iPhone 5. It was funny because its true. Phone’s are used more as a camera than they are as a traditional phone, or so it would seem these days. And so it is not at all surprising that the iPhone 5’s camera comes with an upgrade of sorts. It is disappointing that the 8 megapixel camera of the 4S is still there, though Apple are probably counting on a 5S having 10 megapixels or something of the sort. The 5’s camera however does have 40 percent faster capture, better noise reduction and advanced low light capture.

As well as that there’s a few cool new features for all those budding Instagram-ers out there. The iPhone 5’s new panorama mode is definitely something to be excited about. There’s been a number of apps recently that allow you to create panorama style pictures of digital cameras but they never seem to stitch together right. Apple’s integrated mode however takes a leaf out of an SLR’s book with the way it takes the photo and combined with the new A6 chip produces seamless photos. The front camera which first appeared with the iPhone 4 has also seen a bit of an upgrade and if you use it for FaceTime calls these can now be made over a normal phone connection rather than just wi-fi.

Perhaps the change that has warranted the most outrage is the new lightning connector. Ever since the iPod first came out Apple have been using the same USB to 30 pin connector on all of their mobile products. The new lightning connector however is much smaller to adapt to the thinner, lighter iPhone design. The smaller connector is said to be more durable and is reversible which means that there’s no wrong way to plug it in, much like Apple’s magnetic MacBook chargers. This all seems fine but the outrage comes from all of the current accessories being 30 pin connector compatible. Apple have designed a lightning to 30 pin adapter to solve this problem but it is of course sold separately at £25 each.

Its understandable that this has annoyed people but to be honest Apple is a business, of course they are going to do things that will annoy people to make money. And £25 is a small price to pay to be able to use all of your existing connectors. Or at least I reckon so.

When the iPhone 4S launched last year it came with Siri, the iPhone’s ‘intelligent assistant’. I hate Siri personally. From what I’ve seen with the 4S there’s still a lot of work to be done on it though Apple do claim that they have advanced it much more for the 5. Once you’re done using it as something to impress your friends though I still think that you’ll never find another use for the feature.

The iPhone 5 hasn’t seen a lot of new features nor has it seen a massive redesign. Other than being a little taller than the 4 and 4S it does look a hell of a lot like them. The silver sides of the 4 and 4S have been replaced by black on the black model which does look very nice and the back is now made of aluminium and pigmented glass (or ceramic glass on the white and silver model). While the phone is thinner, lighter and taller it isn’t massively different from the previous model at all. You will now find the headphone jack at the bottom of the phone however.

All in all I have to agree with critics, the 5 really isn’t anything amazing. But at the end of the day Apple, as a business, can make minor changes and still sell millions of these phones and that’s exactly what they are about to do. If you aren’t near to being able to upgrade then maybe it isn’t worth forking out for an iPhone 5 but if, like me, you’re at your upgrade date then its set to be an amazing phone, like any iPhone.