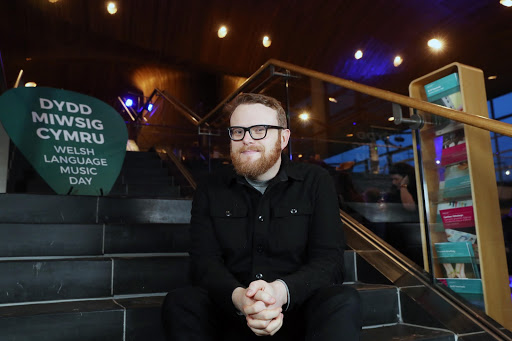 Welsh Language Music Day celebrates all forms of Welsh language music, from indie, rock, punk, funk, folk, electronica to hip hop and everything in between.

Over 20 gigs are set to take place today for Dydd Miwisg Cymru and there will be the largest ever number of special releases from artists and labels, including a total of 13 singles and two albums, one of which is vinyl only.

With the day part of the long-term vision to see a million people speaking and using Welsh by 2050, Welsh language music is being hailed as a great resource for learners of the language, by using song lyrics to add to their vocabulary.

Gavin and Stacey writer and actor Ruth Jones has been using Welsh language music to help learn the language, saying: “Music is a powerful teaching tool, and it’s fun. You connect with a song without knowing what the words mean. And then I go and search what the meaning of a word is.”

21 year old Aberystwyth University student Preben Vangberg, originally from Bergen in Norway who has been learning Welsh for six months says that understanding the lyrics in Welsh language songs he liked was the biggest motivator for deciding to learn, calling Welsh music a ‘gateway drug’ for the Welsh language.

He said: “Music is a great learning device. It is universal and you can enjoy music in every language. One of the most important parts for learning through music is that you can hear the sounds of the language. Obviously listening to people speaking is as helpful, but I find that listening to music is better. You add new words to your vocabulary and I constantly find myself translating words and phrases from songs.”

Today, Welsh Language Music Day will head to the UNESCO City of Music Liverpool, an iconic music location chosen to signify Wales’ links to the city where many Welsh migrant workers built homes in the famous ‘Welsh streets’ and settled in the 19th century. One quarter of the city’s most famous musical export, Ringo Starr, was born in 9 Madryn Street, where he lived until the age of four. Three-piece folk punk band Adwaith from Carmarthenshire, who won 2019’s Welsh Music Prize, will perform for free at the British Music Experience at 1pm.

Elsewhere, Welsh Language Music Day will see a more intimate performance in the UK’s smallest house in Conwy, north Wales, where singer songwriter Casi Wyn will perform for free to the public in the house that fits only four people at one time.

In Cardiff, Welsh language acts Al Lewis and HANA2K, who was recently added to Radio 1’s playlist, will be performing several sets each from 11.30am at St David’s shopping centre in Cardiff, available to the public to attend for free.

Budapest café Három Holló will adopt a Welsh name for the day and surprise guests with Welsh-language pop music, bilingual signage and a special edition drinks menu, written in Hungarian and Welsh. The unusual one-day rebrand was arranged by Welshophile music fan and record collector László Záhonyi, in partnership with Welsh-Hungarian information hub Magyar Cymru. The aim is to raise awareness of Wales’ unique language and music scene among Hungarians, and to continue building bridges between the two cultures.

Welsh Language Music Day ambassador and Radio 1 and 6 Music DJ Huw Stephens said: “It’s been an incredible year for Welsh language music. Not only is this the biggest Dydd Miwsig Cymru to date, but in the last year Welsh language artists like Adwaith, HMS Morris and The Joy Formidable have taken their sounds overseas to new audiences that are now engaged in the language. If you can, get to one of our free gigs today and experience miwsig for yourself, or press play on one of our specially curated playlists and get grooving to some amazing music in the Welsh language.”

Welsh Language Music Day’s playlists cover genres from acoustic to electronic, alongside place-specific sounds for spaces including cafes, shops, offices and parties are available on Spotify, Apple Music, Amazon and other streaming services, meaning current and new fans of Welsh language bands have banging beats at their fingertips.