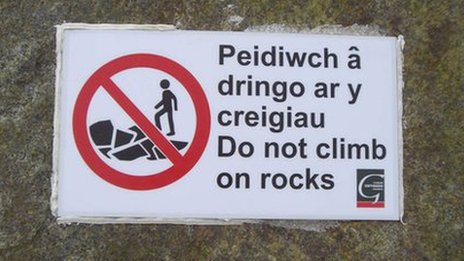 Gwynedd Council have been criticised recently for placing health and safety warnings on a group of rocks on a beach in Cardigan Bay. The group of rocks, that might in some peoples eyes be viewed as perfect for larking about on, are in fact a danger to life and limb for anyone foolhardy enough to go near them, according to the council.

Some local people are unhappy with the move, claiming that they give off entirely the wrong image, as the beach is in an area with significant income from tourism. “It’s as if they have seen people enjoying themselves on the rocks and want to stop it”.