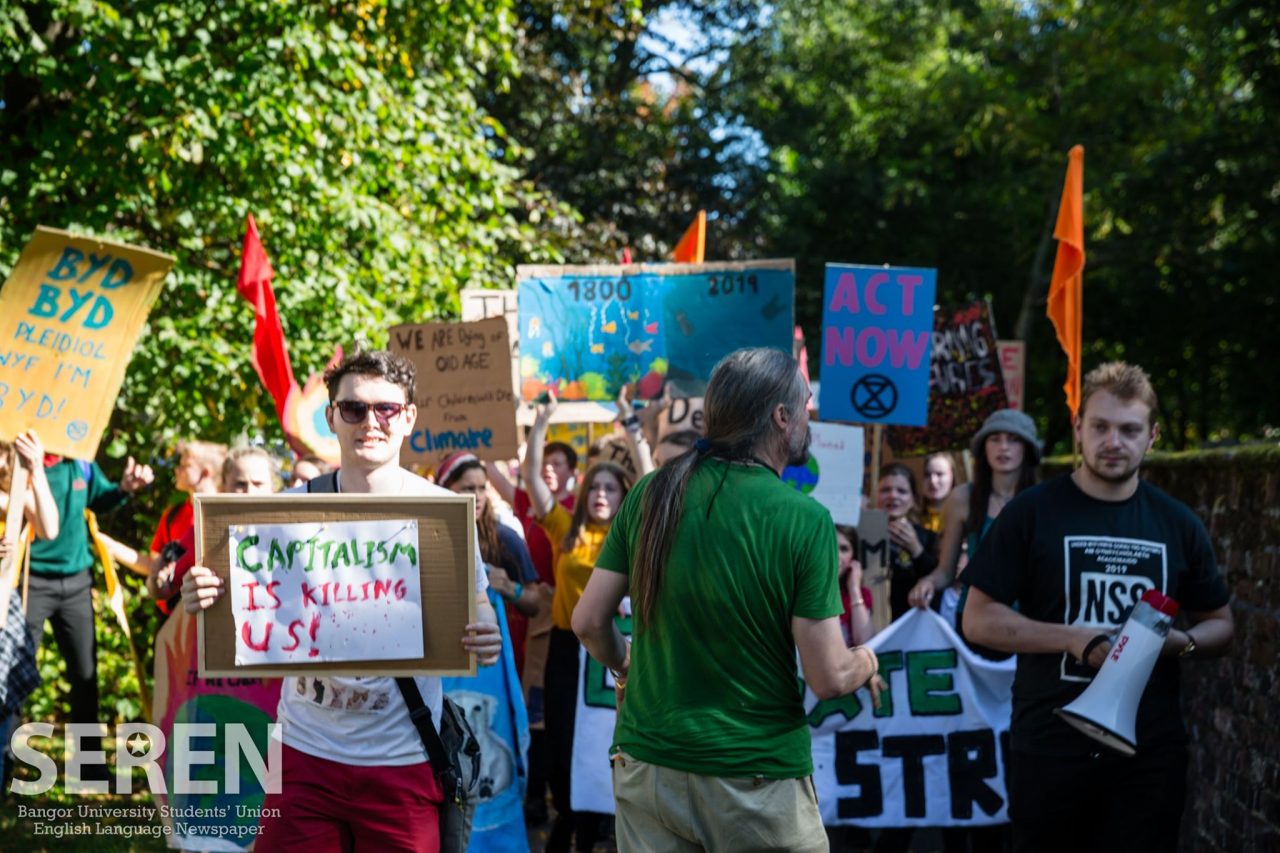 Yesterday Bangor participated in a worldwide network of protests pushing for action to be taken to combat climate change. Four million protestors joined the demonstration worldwide.

School children, students, and strikers began the protest in Bangor University’s Main Arts Quad and steadily marched down the hill and through the high street before assembling to hear speeches and sing protest songs. This march was a part of School Strike for Climate, a decentralised global movement started in 2018 by Greta Thunberg, a then-15-year-old Swedish girl who skipped school in order to protest in front of the Swedish parliament.

School Strike for Climate was yesterday joined by Extinction Rebellion, another climate change activism group dedicated to non-violent civil disobedience, as well as trade unionists, and members of the local and student communities.

(to hear the voices of the crowd, see our collection of short interviews at: https://www.seren.bangor.ac.uk/news-politics/local-news/2019/09/21/global-climate-strike-march-voices-of-the-protest/)

“I started to pay more attention in my geography lessons and I became really interested in the subject of climate change, and as I learned more about it, I realised what a change the world is going through, and that we need to start acting before it’s too late.

“The most important audience would be the government and the council because they’re authority and they’re power. They can really help us make a change and difference.” said one 13 year old girl, having just stepped off the platform from which she had been giving a speech to the assembled crowd. She is surrounded by uniformed classmates and friends, who have come as a class to speak out against climate change.

Hywel Williams, MP for Arfon, is among the listening crowd:

“The very first climate change protest that we had in this area was outside my office- some school student came down, there were only three of them, so I went out and we stood outside for a while with the banners. And I came to the last one and spoke, which was fantastic, but the turnout today really is amazing I think. It is clearly something that is growing and it’s the most important issue that we face, so I should be here, listening to the young people who are speaking, which is what I’m doing.” said Williams.

The UK government declared a climate emergency in May of this year, but a significant number of protesters cite a lack of governmental action in the following months as their motivation for taking to the streets. Many specified that they hoped this demonstration would send a message to those in government. Seren asked Mr Williams how he intended to respond to these protests:

“People like me, people who have positions of trust- it’s really important to get on to us. I mean, I think I’m fully signed up already, and I’m in the opposition and we really need to put pressure on the government, because it’s been months since the climate emergency was declared, for example, and very little has been going on.

“Can I just say, for the people listening, one of the only things that we are doing in Westminster at the moment is blinking Brexit. The proper business of government is being neglected and this should be at the top of the agenda and it’s not.

“What we can do in Westminster now is back the climate change bill that’s being tabled today, the climate emergency bill, tabled by my good friend Caroline Lucas, who is the Green MP for Brighton Pavilion. And we’re going to press this to have a presumption of zero growth and set up a climate commission so that we can direct what growth there is to places like this, which are poor, and stop the overheating of the British economy with all the growth that’s going on in the South-East. Huge amount to do, but I’ll be down there doing the proper job, shouting, and fighting the good fight, I can assure you.” said Williams.

The School Strike for Climate has been primarily driven by schools and schoolchildren worldwide, and hinges around three stated demands: 100% clean energy; keeping fossil fuels in the ground; and helping those impacted by climate change.

“It’s a great act of solidarity, isn’t it, around climate change, about doing our part to raise awareness about the ensuing epidemic that we’ve got, and to really make a stance against it. To show that young people, in particular, are switched on to what is the issue, to what is the main issue for the world, changing climates. So many people getting involved, it’s just such a great thing to see.” said Mark Barrow, president of the Bangor University Students’ Union.

He too has come to support the strike, and answers some of Seren’s questions about what the Students’ Union is doing in relation to climate change activism:

“Since the very first one of these- I think the first on was a few months ago now, this is the fourth or fifth one in Bangor- we’ve been involved in terms of the behind-the-scenes work, in terms of the organising, putting it together- even hiring out high-vis jackets and the megaphones and things. And just making sure that gets as much into peoples’ consciousness in Bangor as possible.”

Greta Thunberg herself spoke from another sibling protest in New York yesterday, advising opposition to the movement that “Change is coming whether they like it or not.”

In the near future, Extinction Rebellion is planning further protests of their own in London for the 7th October, in which they intend to close roads into Westminster.