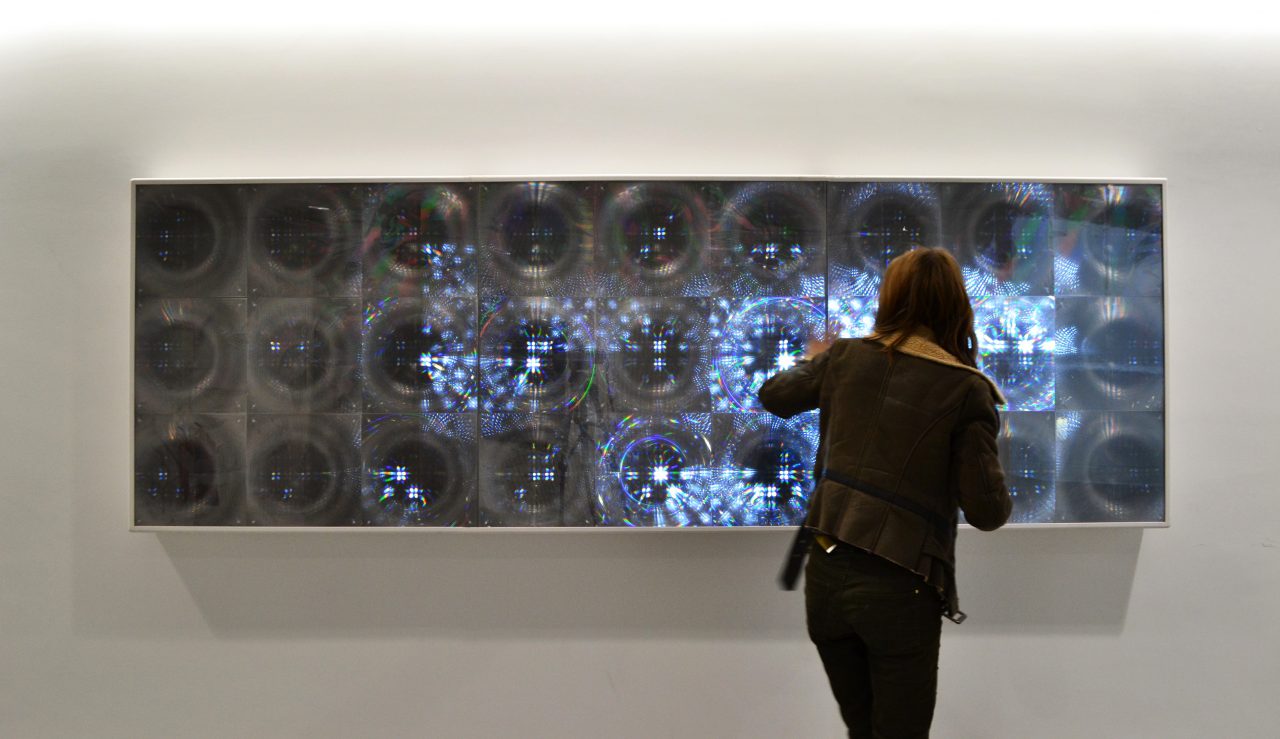 You may have noticed certain pieces of technology that have been appearing throughout Pontio over the past couple of months. These pieces are part of a public art commission called ‘Changing Light’.

The artist behind the collection of works is called Jessica Lloyd-Jones. Jessica is a local artist based in LLangollen. She is a visual artist who merges art, science and technology as she investigates the interaction of materials and processes with light. She does this by creating artworks and installations that encourage us as an audience, to look at the world in a different way.

Her previous site-specific works include a permanent light installation at Ruthin Craft Centre, Ruthin and wind responsive architectural lighting at Plas Heli, Pwllheli. Jessica attended Staffordshire University in 2005 where she graduated with a 1st Class BA Hons in Fine Art and later in 2007 received a MFA Sculpture from Edinburgh College of Art. She has also gone on to win various awards such as the Arts Council Wales Creative Wales Award recipient and being shortlisted for the Royal British Society of Sculptors Public Art Award in London.

Her work has now brought her to Pontio, Bangor where over the past five months, Jessica has been testing various ideas for temporary installations and interventions involving light, which are now being installed in public spaces throughout various floors in Pontio.

Her collection will carry a total of five pieces of artwork that will be revealed between now and March when Jessica will give a talk and do a walk through of her artworks. The talks will be free of charge and take place on the 11th March at 11am, 1pm and 3pm and booking in advance is essential. The talks will coincide with Bangor Science Week and Jessica will discuss the creative processes behind each of the pieces of art.

The first of Jessica’s artworks is inspired by a visit to the Photonics Academy of Wales at Bangor University and is named ‘Light Wheel’. An everyday material; sellotape produces changing colours and patterns when viewed through a specialised filter – revealing an otherwise invisible phenomena. The work changes throughout the day, becoming more vivid as evening draws in. Jessica worked with local engineers to realise this large scale artwork. 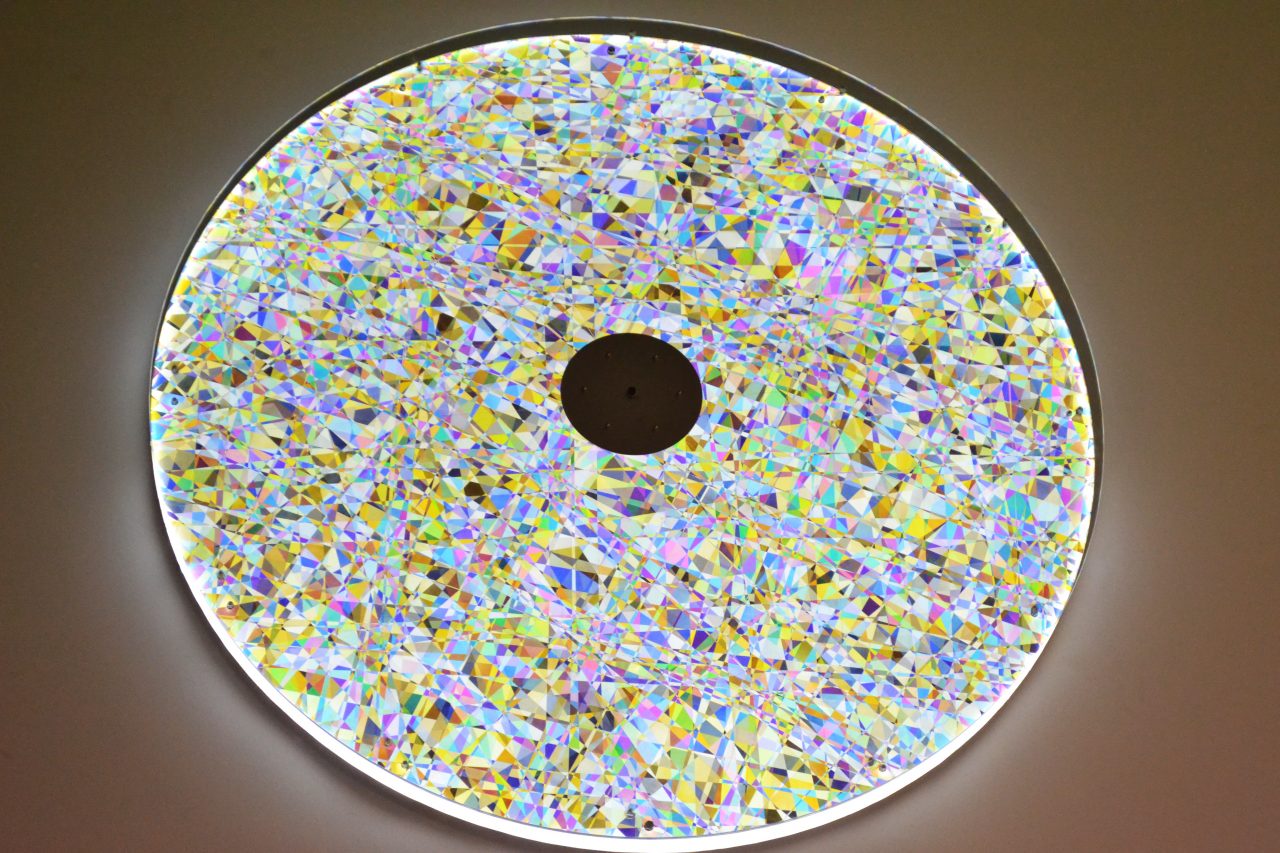 Her second piece is named ‘Arc’ in which, Comets of red, green and blue light intersect the main atrium space in an ‘arc’ formation referencing the motion of a swinging pendulum. Jessica worked with lighting specialists and programmers to carefully design and choreograph the dynamic display of movement. 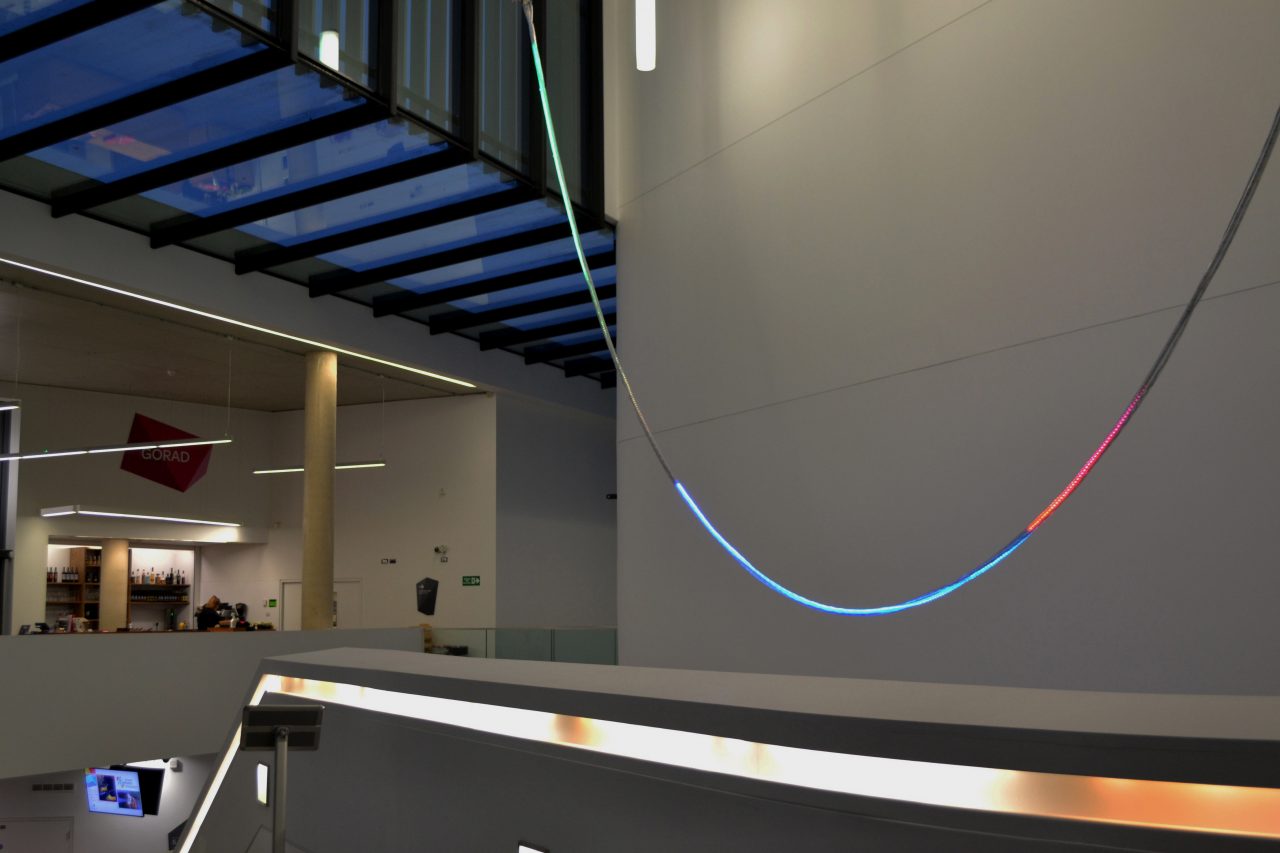 Thirdly, her piece named ‘Spectral Sensing’. The piece works by sensing light and shadow to activate a programmed sequence of animated lights concealed behind and array of lenses. Walk near to the artwork to ‘activate’ some spectacular visual effects.

Her final two pieces are named ‘Spectral Shift’ and ‘Solar Chroma’. ‘Spectral Shift’ employs a similar spectral effect to ‘Spectral Sensing’. A series of light tubes are suspended vertically within the window of the Gorad restaurant. The tubes appear almost transparent in the day, but as the evening draws in, they reveal a spectral array of colour, heightened by their mirror image reflections on the windows. 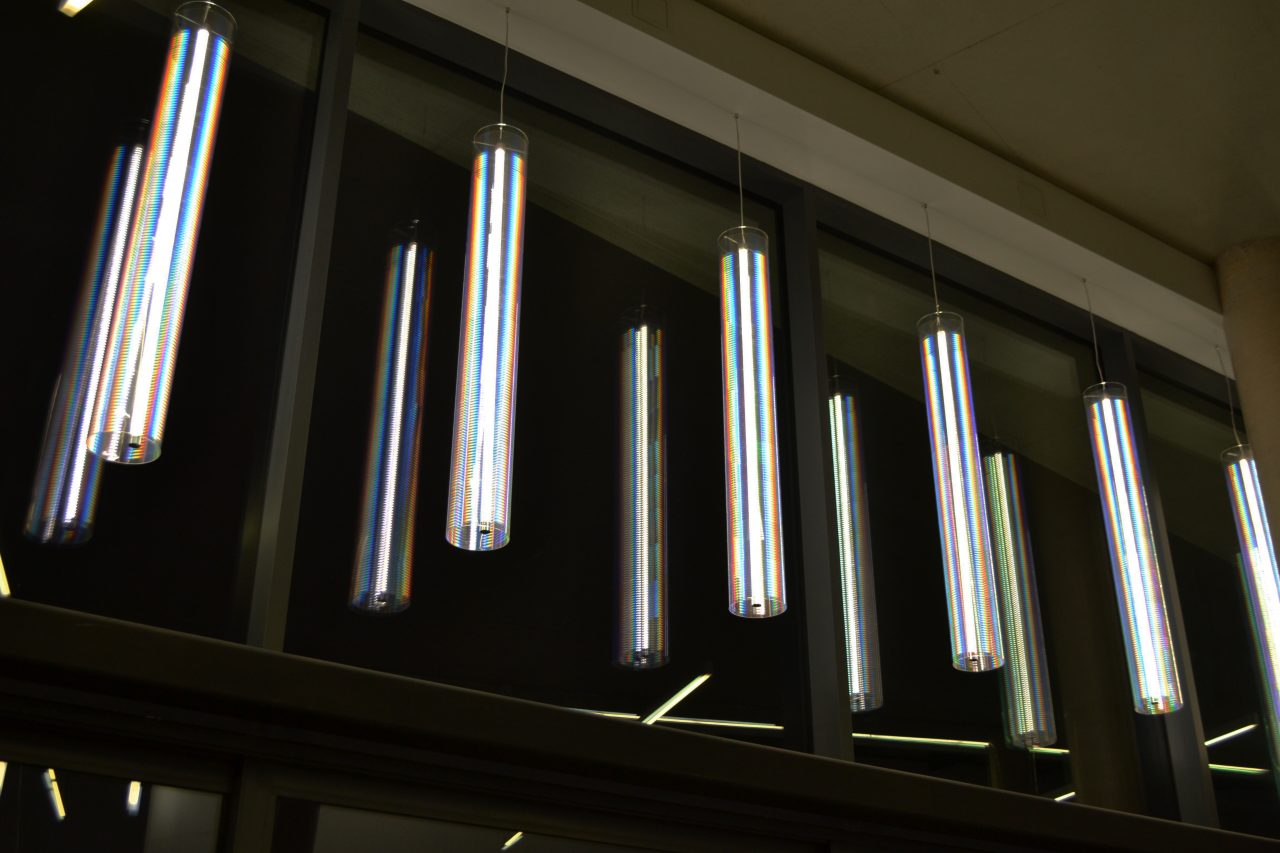 ‘Solar Chroma’ are series of suspended colour-changing panels display transparent and reflective hues against the ambient daylight. In moments of sunlight colourful projections can be seen on the surrounding walls, activating the space to create a sensory walk way. 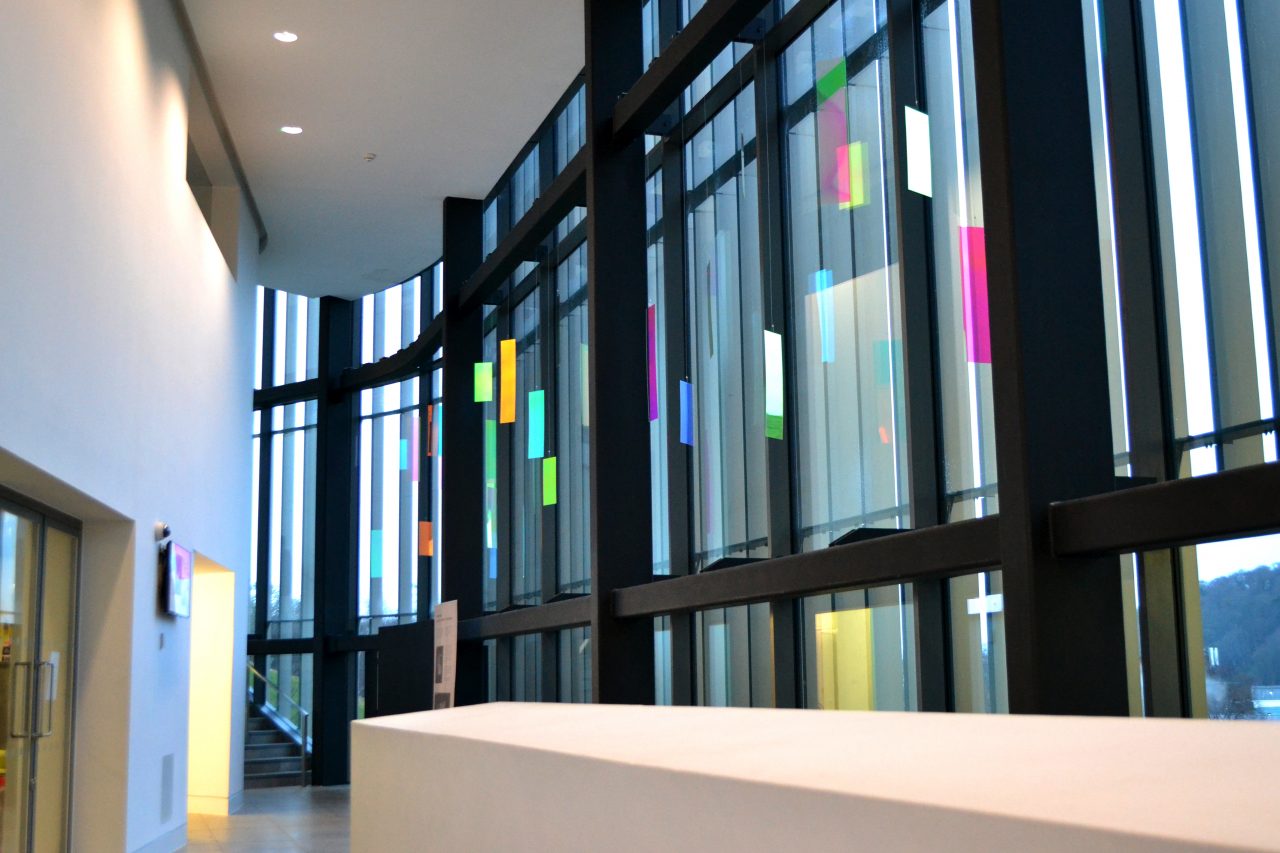 Jessica talks about the artworks stating: “Many of the pieces created have a kind of transience about them – changing throughout the day in different ambient lighting conditions. They are in a continuous state of flux. Some artworks increase in intensity from day to night, some are enhanced by sunlight and others are interactive. It is these inherent qualities in the works that excite me; the fact that they are always changing and never look the same.”
She goes on to state: “The project has been both liberating and challenging, giving me creative freedom to realise whatever my imagination could come up with. The public art commission has been a unique opportunity to respond to the architecture of the new building and experiment with unconventional materials.”