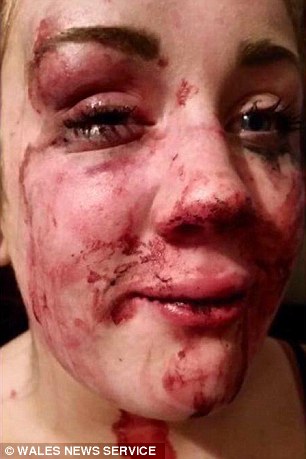 A north Wales teenager was left ‘covered in blood’ following a brutal attack at a house party in Abergele.

Tia Jade Edwards, 16, sustained the images after an alleged attack by two 37-year old women, in which a glass bottle was used.

Edwards’s aunt, Alison Faulds, of Old Colwyn, contacted the police in the aftermath of the attack, and uploaded pictures to Facebook showing the full extent of the teenager’s injuries.

Ms Faulds spoke to The Daily Mail, saying: “I decided to release the disturbing images to highlight the injuries and encourage potential witnesses to come forward.

“Tia banged on my door at half-five in the morning on Sunday.

“I ran downstairs and just saw her covered in blood.

“For the first five minutes I was trying to take it in, then I rang police.”

The 16-year-old was treated at hospital after the attack, which allegedly began after Tia rowed with a friend, who then returned with her mother and a family friend to confront the teenager.

The two women allegedly involved in the attack are now in police custody, and police are currently appealing for any witnesses from the party to come forward with any information.