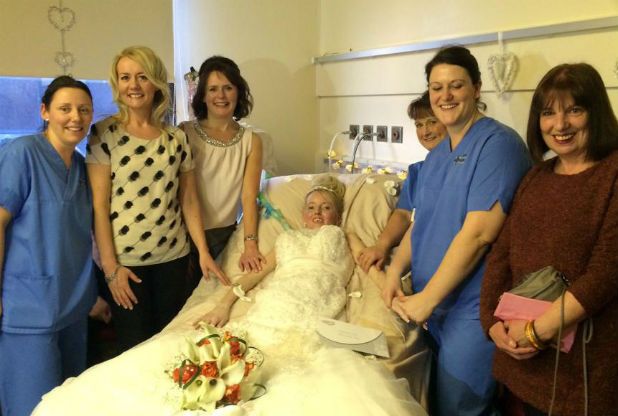 Gwynedd childhood sweethearts have said ‘I do’ in an Intensive Care Unit.

Hayley, from Bethel, was diagnosed with Crohn’s disease in 2005 and underwent an emergency operation last August. Complications led to her permanent stay in Intensive Care.

The couple had already planned most of their wedding when Hayley’s condition turned extremely severe.

The staff at Bangor’s hospital helped the couple to prepare Hayley’s room for the ceremony. A small group of friends and family gathered for the intimate service, and a buffet was prepared for later.

Hayley is due to move to Hope Hospital in Manchester to meet specialists in the hope of getting some further treatment.
Hayley’s mother, Eirian Whittingham, said: “It was a lovely day. We had about 20 people in the room, family, friends and medical staff and the registrar did everything she would normally do. “Nothing was different apart from the location. The nurses had gone to great lengths to decorate the room and make it look really nice. Afterwards we had a small buffet in a room near to the unit.

The wedding was the first of its kind to be held in this department of the hospital. The original wedding was planned to take place in May 2014.

New husband David said:  ‘The wedding obviously couldn’t go ahead as planned in the hotel but it was the nurses’ suggestion that perhaps we could have a blessing in the hospital instead. It sort of snowballed from there.”

He added: “The nursing staff have been amazing and pulled out all the stops to make sure the wedding took place even though it had to be in the intensive care unit.”

The couple’s two daughters were VIP guests at the wedding. All the guests spoke of how incredibly proud they were of Hayley. She showed great strength at the service.

Eirian added: “I was really surprised to find out it was the first time a wedding had taken place on Ward Cybi.

“We’ve come such a long way and have long way to go. The Intensive Care Unit staff have been absolutely brilliant, I really can’t praise them enough.”

“She is small in stature, always has been and I don’t know where she gets the strength from but she is a real battler.”

Hayley was working as a bar supervisor at Cofi Rock in Caernarfon before her illness.