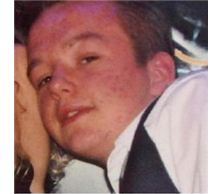 An appeal is being made by the family of an A-level student who went missing Wednesday 25th April 2012. Beloved brother and son Matthew Williams, 18, from Bangor, was last seen by his parents Dennis and Susan Williams as he left their home on Caernarfon Road on the Wednesday to get a McDonalds from the nearby outlet, and later told them he was going to visit a friend’s house nearby. Matthew’s mum Susan, 42, became concerned when she discovered that Matthew, who volunteers at an old people’s home, was not in his room Thursday morning when she went in there, despite his assurances that he would be back by 11pm on the Wednesday night. “I knew straight away something was wrong. He is not the type of lad to stay out or go clubbing with friends so I knew something had happened.” Susan told the Daily Post. Dad, Dennis, 52, then alerted police, instigating a massive search for Matthew that has seen friends and police join the hunt.

Matthew Williams, a student at Coleg Menai, was due to sit his A-levels this month, hoping to become a doctor. Susan revealed: “It is with us every second, we can’t understand why he would go away. The worst part is not knowing what has happened to him. We are just praying and hoping he will come home, we can’t give up hope.”

His parents, devastated by his disappearance, have explained how they have had to tell Matthew’s 6-year old sister Tiana that her big brother was missing. “We didn’t tell her for a few days but then felt we had to because of all the posters around of Matthew asking for help. He is my best friend and he is Tiana’s best friend as well. Telling her has been one of the hardest things.” Susan continues, “His sister misses him, he is a very loving brother. His older brother Daniel is desperately worried as well and has been back from Telford, where he lives, to search for him.” It has been more than two weeks now without any news about Matthew. Dad, Dennis said: “We just want to him to come home. If he can’t do this we just want him to let us know he is safe and well.” He adds, “We want to thank the police and all those who have supported us to search for Matthew.”

North Wales Police are appealing to anyone with information to contact them on 101 or Crimestoppers on 0800 555 111. “We also want to hear from anyone who may know of Matthew’s whereabouts. I would also appeal to Matthew himself to contact police and his family to let them know that he is safe and well.”

Matthew, 18, was last seen in the Caernarfon Road area of Bangor at about 5.00pm on Wednesday 25th April 2012. He is described as being 5’11”, slim build and muscular. He is clean shaven with brown short hair. He was wearing a green long sleeved hoody top and blue jeans.