Glee: The End is Near 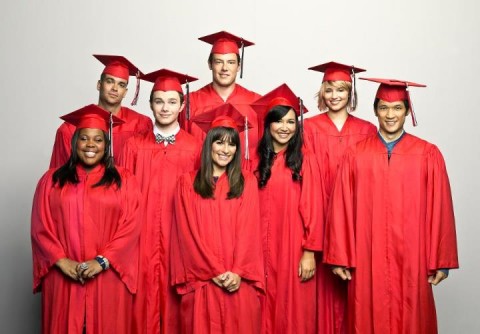 If you’re reading this I’m going to assume that you’re on American time, because it seems in the UK the only realistic way you can watch Glee is online.  As Graduation rapidly approaches, Gleeks start to prepare to say farewell to key characters that have been there from day one.  Can you imagine Glee without Kurt, Finn, Rachel or Santana?  Would you watch Glee without independent Quinn, or diva Mercedes? Or are you actually tired of Finchel and want something fresh?

The mid season finale, left us witnessing Quinn in what looked like a fatal car crash.  The series’ writers have been criticised for sucking all potential drama from this story line.  When the series started again, did we see her in a critical condition with the New Directions praying for her survival? Oh no, she was there in the choir room first episode back.  Sure she was in a wheelchair, but with a promise that with psychical therapy, she would be up and walking soon enough and otherwise happy and healthy.

It tested the relationship of Finchel, Finn realised he hadn’t actually planned what he was going to do in New York, while Rachel danced into musicals on Broadway.  The temptation of Puck’s offer moving to LA to expand his pool cleaning business briefly pulled Finn away, long enough to make Rachel realise she had been selfish, sung Finn a song and apologised, and they were back together again.

Klaine’s relationship was briefly tested when Kurt encountered a very complimentary Chandler in the music shop.  A fellow student aspiring to Broadway fame in New York who won Kurt’s number with the line “us future New Yorkers gotta stick together,” and proceeded to text Kurt nonstop.  Blaine found the texts and accused Kurt of cheating.  Kurt defended that Chandler complimented him, something Blaine never did.  A hurt Blaine then performed “It’s not Right but it’s OK,” Kurt told Chandler not to text him again an

d once again they were back together.

In recent episodes we’ve seen tributes to John Travolta, Whitney Housten and even a guest star Whoopi Goldberg.  Rachel possibly gave her best performance yet when she performed Kelly Clarkson’s “Cry” at the end of the shocking “Choke” episode.

Glee Project winner Samuel Larsen as Joe Hart, seems to be having more of a storyline than fellow winner, Irish Damian.  Joe has been helping Quinn with her physical therapy, and of course has developed a crush on her, but with Quinn about to graduate, could this possible romance realistically develop into anything before she leaves?  We’ve also seen The Glee Project’s final offering, for this series, in the form of Wade Adams (Alex Newell).  Seemingly a lovechild of Kurt and Mercedes, he goes to them for advice on performing in drag, at Regionals with Vocal Adrenaline.  They tell him not in to for fear of him getting hurt.  But Wade defies both of their advice and goes behind team leader, Jess St James’s back, performs in full drag, (making a remarkably convincing woman) winning the audience and Regionals. Season two of The Glee Project starts in June, so maybe by the time we get a new series of Glee we’ll be seeing even more new faces.

Sue meanwhile, is told if the New Directions don’t win Nationals, then she will lose her position as coach of the Cheerios.  So she does everything in her power to encourage the New Directions and in a very unlike Sue way, is nice to them.  She doesn’t let on her selfish intentions though she blames it all on hormone surges as a result of her baby (which we still don’t know the father of yet.)
In the last dinosaur themed prom episode, the boys of the New Directions performed One Direction’s “What makes you beautiful” complete with boy band choreography.  We saw Rachel finally looking very glamorous, and more like Lea Michele at a premiere than Miss Berry.

The season finale this week is a two hour special.  Previews have hinted that the first half, is to be a dream that Tina has, after hitting her head.  She imagines herself as Rachel, and the whole of the Glee club swap roles. Mark Salling as Blaine (with hair!) which means, oh yes, Darren Criss with Puck’s mow hawk.  With Tina as Rachel can only mean Rachel with Tina’s goth make up and Kurt and Finn swapped should be very interesting.  I won’t give away anything else but I’ll just say there’s also some gender swapping too, with even the adults not acting like themselves.  With Graduation upon them, perhaps the Glee club will finally win Nationals…