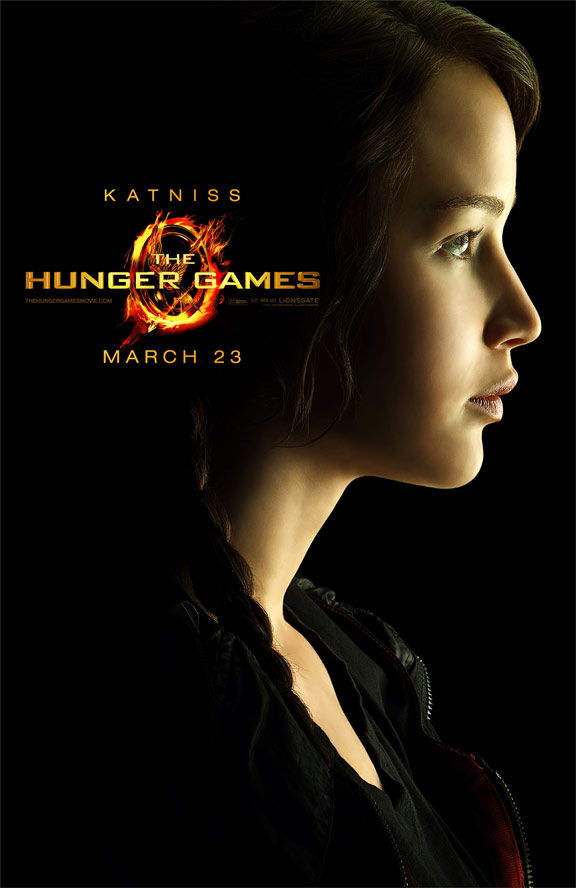 This year will see a feminist surge of films where girls finally take the main role. We have had role models such as Hermione Granger, but the story was all about Harry. The only films in the past few years, that have been centred around women are – dare I say it – Twilight and The Girl with the Dragon Tattoo, even then Lisbeth was helping Mikael, it was how he was ultimately going to solve the case.  In the next few months we’ll see films with a heroine that saves herself, and in most cases, others too.  2012 will see a cultural shift in cinema, where female roles won’t be one dimensional princesses, girlfriends or token sex symbols.

March 23rd will see the release of the anticipated film, The Hunger Games. Set in a not-too-distant future, North America has collapsed, weakened by drought, fire, famine, and war to be replaced by Panem, a country divided into the Capitol and 12 districts. Each year two young representatives from each district are selected by lottery to participate in The Hunger Games. Part entertainment, part brutal intimidation of the subjugated districts, the televised games are broadcast throughout Panem. The 24 participants are forced to eliminate their competitors, literally, with all citizens required to watch. When 16-year-old Katniss’ young sister, Prim, is selected as the mining district’s female representative, Katniss volunteers to take her place. She and her male counterpart Peeta, will be pitted against bigger, stronger representatives who have trained for this their whole lives.  With its 12a rating, (slight spoiler) it’ll be interesting to see how they tackle the scene where a character gets eaten alive by mutant mutts.

In the first half of the year we will see two very different adaptations of the Snow White tale hit the screens. Snow White and the Huntsman (released June 1st), is a grittier take on the tale. Snow White (Kristen Stewart) instead of being killed by the huntsman, is tutored by him to kill the queen.  The trailer depicts a more civil war and political side to the tale, and the poster shows Snow, decked out in full amour.

Mirror Mirror (16th March) on the other hand, is more light hearted and fantastical, starring Julie Roberts as an entertaining queen and rising actress, Lily Collins as Snow White. Snow declares in the trailer “there are so many stories where the prince saves the princess, it’s time we change that ending” giving the overall tone for the film.  Lily Collins (Abduction) will also be starring in my next film, The Mortal Instruments.  So far it doesn’t have a release date, other than 2012.  It is another adaption of the novel by Cassandra Clare.  Clary Fray lives a normal life with her mum, until one night she bumps into a group of demon hunters at a night club. She soon finds out she’s not quite so normal, and her mum has lied to her all these years. It also stars Jamie Campbell Bower as demon hunter heart-throb, Jace.

Finally on August 13th, Disney Pixar gives us their first heroine, the fiery redhead Merida, in Brave. Set in Scotland in a rugged and mythical time, Brave features Merida, an aspiring archer and impetuous daughter of royalty. Merida makes a reckless choice that unleashes unintended peril and forces her to spring into action to set things right.

By the time Halloween comes around, the world of cinema will have given us a few more strong female characters and costume ideas.  I shall certainly be spending a lot of time at the cinema this year.