A Bookish Guide to the Bronte Sisters 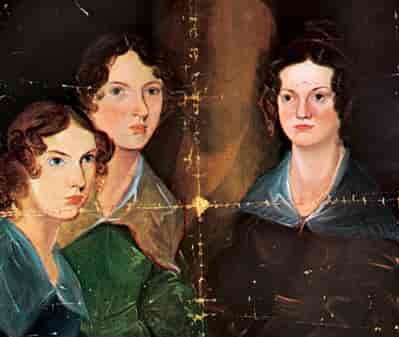 “There was no possibility of taking a walk that day.” This is the opening line of Jane Eyre, the classic gothic romance novel written by the eldest of the three Brontё sisters, Charlotte. Words that ripple across time are incredibly rare, but in the case of the Brontё sisters, each line of prose is a whispered moment of three lives remembered, their circumstances (isolated in the Yorkshire Moors) oft-forgotten. Their names were Charlotte, Emily, and Anne.

As the nights draw in and each day gets a little colder, mistier and vibrant with each shade of autumn, we are all in need of books we can hold close; books that will envelope us and beckon us to turn the next page. Beyond Halloween, autumn still runs riot, and we couldn’t think of a more atmospheric selection of reading than the works of the Brontё sisters. Each had their own unique, moving flair of creativity, writing tales that are so often quoted that the phrases the sisters composed are ingrained in our language. In case you haven’t read any work by the Brontёs before and want to give them a try, we’ve compiled a quick rundown of each sister’s works, and where to start with the writings of these amazing women.

If you liked the works of Thomas Hardy, such as Tess of the d’Urbervilles and Far From the Madding Crowd, you’ll like…

Perhaps the most overlooked of the sisters, Anne’s body of work is a striking collection of heartbreak, tragedy and the bleak realities of Victorian life. Despite all these negative themes, however, the way in which she writes the dynamics of relationships is certainly far ahead of their time, discussing gaslighting, emotional abuse and controlling marriages. Anne, or as she was known under her penname, Acton Bell, lived and died quietly at the age of 29 from tuberculosis, but nevertheless she made her radical mark on the literary landscape of her age and became the first Brontё sister to be a published author. Unlike the romance of her sisters’ novels, Anne was frank in her discussion of life’s trials and tribulations. Though her books featured love, they were not the stormy whirlwinds featured in Emily or Charlotte’s work, and perhaps that is why Anne is underestimated as an author. There may be overlaps with her sisters’ works, but Anne stood proudly on her own two feet, carving her own way in literature, attempting to break the already-established Brontё mould.

If you enjoyed Edith Wharton and E.M. Forster, you’ll love…

Described by her elder sister as “wild… melancholy and elevating”, Emily Jane Brontё’s life was mirrored in the Yorkshire landscape she adored. Known predominantly for a certain novel which inspired Kate Bush (you know the one), it’s often forgotten that Emily was also an outstanding poet, furiously scribbling more than 200 in her short life. Unfortunately, the world never got to devour a second novel by the middle sister, but we get faint glimpses of it in the poetry of a vividly imagined fantasy, the land of Gondal. Emily’s writing is perhaps best known for its intricacy, weaving together past, present and future through her characters and also for her astonishing depictions of the earth, place and nature. Her one novel is considered nowadays to be a cult classic, and is bursting with fraught relationships, angry lovers and obsessive friendships. It is a masterpiece in every manner; tumultuous, tender and terrific on each and every page. Though Emily is widely regarded to have been a recluse, her imagination and creativity suggested a thirst for life, love of her home in Haworth and the urge to push the boundaries in literature as the Victorians knew it.

If you enjoyed the works of Elizabeth Gaskell or George Eliot, you’ll like…

Perhaps the most famous of the sisters, Charlotte Brontё’s body of work is another triumph of the siblings, considering the amount she published, its length and the very fact that in the Victorian era, the only way of writing was by hand, commonly by candlelight. Though Charlotte has acquired controversy for how she allegedly handled her sister’s works (such as burning copies and writing disapproving forwards to their novels), she is rightfully known as a staple of English literature. A master craftswoman of romance, trauma and passionate rebellion against social conventions, Charlotte’s works are rich in deep monologues, emotive pledges of love and radical feminist attitudes. Like her sisters, Charlotte rejected the ideas of being a serving, domestic daughter of a clergyman and instead sought to create her own financial position as a writer. A “tiny, delicate, serious lady”, she died of severe morning sickness whilst pregnant, closing the final chapter on the Brontё sisters’ lives. Nonetheless, in her short time she interspersed her classic Victorian literature with progressive thoughts and marvellous heroines, leaving this world as a name that time will unlikely ever forget.