On The Road by Jack Kerouac 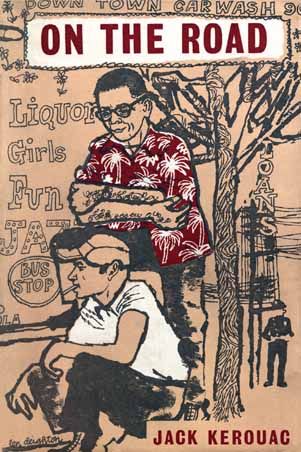 On The Road is an important book for a number of reasons. It is credited with beginning, or at least catalysing, the American road-story genre. Much like other books of the same movement, On The Road is important because it was so shocking and graphic for its time. Kerouac spoke explicitly about drugs, sex and “bum” life. These are all themes that were central to the “Beat” movement that the book belongs to.

The story is reality thinly veiled with pseudonyms. Sal Paradise (Kerouac) and Dean Moriarty (Neal Cassidy) spend their days chasing women, drinking excessively and hitching rides across America, and discussing the material of the universe. It sounds exciting, and often it is. The story is real and gritty, with Kerouac balancing humour and poignancy exceptionally well. Much in the way that in real life you can just have a feeling about someone, Kerouac has a way of describing people that means you know them completely without knowing them very well at all.

It is possible, if not likely, that Kerouac was in love with Cassidy. They had a relationship in some form, but Kerouac suggests that the character Carlo Marx (Allen Ginsberg) is Dean’s only male love interest. Earlier, more obvious versions of the book detailed these activities too explicitly for the public at the time (it is important to remember that homosexuality was illegal in America when On The Road was published in 1957). Through Kerouac’s rose tinted Ray Bans, Dean is an angel. Even Allen Ginsberg calls him the “Adonis of Denver”, and yet he lies, cheats, steals and blames his absent father for it all.

Kerouac skims over the subject of race and racial stereotypes more than addresses them. Sal and Dean crash into a jazz club where black people dance to black jazz, bop and swing artists like Thelonious Monk in a way that white America was completely unaware of, or was doing its best to ignore. There is a poignant moment where Kerouac reflects on the energy and life in that club and others like it. He breezes past deeper discussions of race, throws in the odd derogatory term (you have been warned) and manages to boil everything down to “kicks”.

The book is certainly worth reading. It was an important book for its time and kick-started an entire genre of books and films. America fell in love with the open road. The story gives insight into the way the world worked, and how one group of people connected across the huge American landscape and challenged social norms by living outside them and writing about an alternative life to the suffocating 9-5 treadmill. The collective work of this movement inspired the hippies of the 60s.

Kerouac’s writing style is refreshing, and if you are looking for an interesting story you will enjoy this book. I find The Dharma Bums, a later but somewhat similar novel, to be a far more satisfying read because Kerouac actually stumbles upon content of substance and doesn’t involve the still-drunk-and-behaving-inappropriately-hungover sidekick that is Dean Moriarty.

In summary, you should read On The Road, even if you find it a little bit obnoxious.