The Perks of Being a Wallflower by Stephen Chbosky 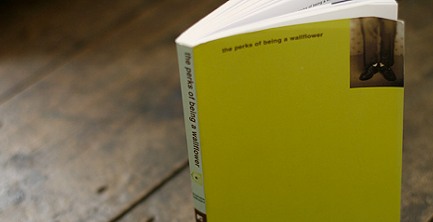 To me there are three types of readers. There’s the book lovers who will read every book ever because reading is everything. Then there’s the forced to read readers who have to read things for classes. And then there’s me; I’ll only read something if I have a prior vested interest in the book or topic of the book. The only things I’ve read in the last few years have been novelisations of video games. So when I heard that Perks was being made into a movie starring both Logan Lerman and Emma Watson I thought I’d give it a go.

The Perks of Being a Wallflower, by Stephen Chbosky, is, to put it simply, a 224 page masterpiece. From suicide to drug use, homosexuality to abuse, it bravely covers pretty much every topic that could form adolescence. And Chbosky tackles each one with ease.

The book, written as a series of letters to the anonymous ‘Dear Friend’, chronicles fifteen-year old Charlie’s first year of high school. After his only friend, Michael, commits suicide, Charlie is left with no friends and feeling even more outcasted than before. He hopes that if he can only make a friend he will be able to put his past behind him and finally begin to ‘participate’.

Chbosky’s understanding of the teenage mind is evident, all of Charlie’s worries and doubts are those that I daresay most of us are familiar with. There’s a whole other layer to Charlie though, one that even the most talented of writers would struggle with. Chbosky secures himself as a more than talented writer with his deep understanding of his character and the many layers of Charlie that he writes.

Starting high school turns out to be good for him when he meets two seniors; Patrick and his step-sister Sam. The two warm to Charlie and let him into their world of The Rocky Horror Picture Show, parties and drugs. However, the sudden falling out with his new friends sends Charlie all the way back to where he started, an outsider once more. He finds himself getting more and more immersed in the books that his teacher, Bill, gives to him to read. Charlie is a thinker and the characters in his books all influence the way he thinks in different ways. Not able to talk to his family or friends he finds that the books are the only thing he has. The books and the letters.

Each of Charlie’s experiences build up to the book’s shocking and heart-wrenching finale in which he makes a shocking discovery about himself that explains exactly why he’s the way he is.

Stephen Chbosky’s timeless novel is brilliant in every way. While we don’t know or understand Charlie at first we immediately want things to be better for him. As the story continues you can’t help but fully assume the role of the ‘friend’ that Charlie is so in need of.

If, like me, you don’t find a lot of time for books and don’t really have the attention span, The Perks of Being a Wallflower is definitely something worth giving a go. I was hooked instantly and by the end of the day had finished it. Though I desperately wanted more. Luckily, the movie adaptation is now out in the UK and you can read about it on our Film page.