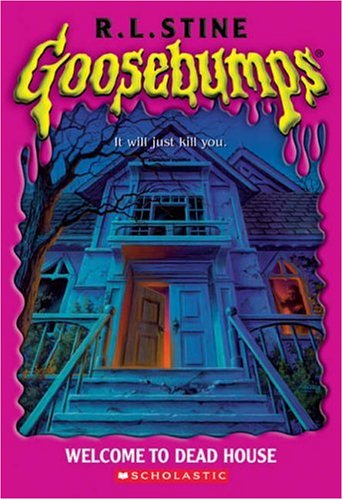 Why do children love horror so much? We shouldn’t really be surprised that they do though; think about the fairy tales they are brought up on. Dark tales of death and destruction all spun in a way that makes them seem palatable for young ears but actually aren’t, yet they love them.
Maybe this is why Goosebumps, by the American author R.L. Stine, has already started to become exceedingly popular. The first two books to be released in the series have gone down a storm with young readers everywhere, and the next book is being eagerly awaited.
Stine’s style for this series is horror; spin-chillingly brilliant horror for young readers, as the stories seem to grip their imaginations and create many a nightmare whilst also remaining thrilling.

The first book, Welcome to Dead House, tells the story of a brother and sister who travel with their dad, and dog, to a town called Dark Falls. They’re there to visit a house that their dad’s recently deceased Uncle Charles has left them, though neither of the kids remember any Charles.
Stine quickly puts the parent out of the picture allowing the story to focus solely on the children, thus allowing his readers a channel into the events that follow. Josh and Amanda, 11 and 12 years old respectively, soon find that not all is right with the house. A looming old pile harking back to the age-old haunted house style, it does not fail to live up to its appearance.
Josh and Amanda soon discover other children in the house, children who are not alive. These undead kids kill the family dog and start chasing our still-breathing protagonists in order to feed on their blood. What makes these undead children creepier than your average zombie, yet not as completely terrifying for the younger readers, is that they talk to the protagonists and explain what is happening. I won’t reveal any more of the book but from even this tidbit you can see that Stine is not afraid to create real jeopardy for the characters, and thus, his readers.
The follow-up book, Stay Out of the Basement, focuses again on two children. This time the threat goes from external ghosts to internal; their father is acting strange, banning them from entering the basement. It turns out he is carrying out experiments on plants down there, plants that whisper.
With the next book, Monster Blood, due to be released next month I think we are seeing the beginnings of a phenomenon. Here are cleverly written horror stories that are getting kids reading; and furnishing night-light companies with a hell of a lot more business.