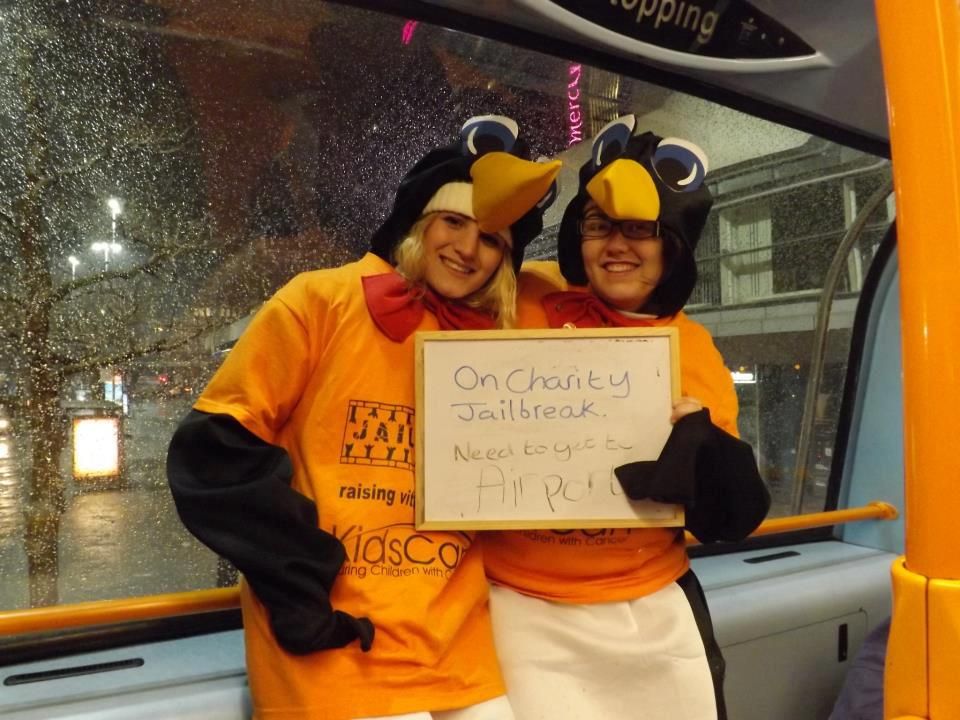 At 17:30 on Friday 22rd March 2013, Micha and I set off from Bangor Students Union building on Jailbreak, with the hope of travelling the country for free. We had 30 hours to travel as far as possible away from Bangor with one catch, we weren’t allowed to spend any money.
So, looking truly ridiculous dressed as two penguins, we hitched a lift with a friend in the direction of Manchester and set off on our journey. After a long and treacherous car journey through the snow, wind and rain, we were dropped off at Manchester Airport where we spent the next few hours pleading with all the airlines to fly us abroad. One airline kindly offered us two return tickets to Islamabad but unfortunately we had to decline on account of having no visas.

Knowing that many of the airlines wouldn’t open until 3am the next morning we set off on a train headed for central Manchester. Upon arriving at Manchester Piccadilly station we quickly sought out the local coach station and waited two hours for the next coach to London. However, as the coach would not take us, we caught a bus back to the airport and after having no luck with any other airlines we tried to get some sleep on a bench. At 6:30am two very tired and cold penguins were permitted to board a coach to London and we were finally on our way!

We arrived in London at roughly midday and set about trying to catch a coach abroad. We nearly managed to board a coach to Paris the offer was unfortunately revoked at the last minute. After a long five hours being unsuccessful in travelling out of London we finally managed to board the Megabus to Glasgow.

With time running out we needed to decide where we wanted our final destination to be at the end of the thirty hours. We decided that we wanted to do a round trip and attempt to return to Bangor by the end of the challenge. So, with our new destination set we left the coach at Sheffield and caught a train across the city. After a short wait we then boarded another train with the intention of changing trains and then heading to Chester. After a very long 28 hours we were looking forward to getting to Chester. However, in an unfortunate turn of events, the train broke down due to the adverse weather, leaving us stranded somewhere near Stockport, Manchester at the end of the thirty hours.

After a long and very cold thirty hours, during which we ate only one hot meal and had approximately six hours sleep, two tired penguins stayed at a friend’s house in Manchester before catching a train back to Bangor in the morning.

We would like to wish Bangor RAG a great big thank you for organising the event and posting our progress on Facebook on a regular basis. Jailbreak was an amazing opportunity to raise vital funds for KidsCan, a charity that cures children with cancer and an exciting adventure for two penguins on the run!