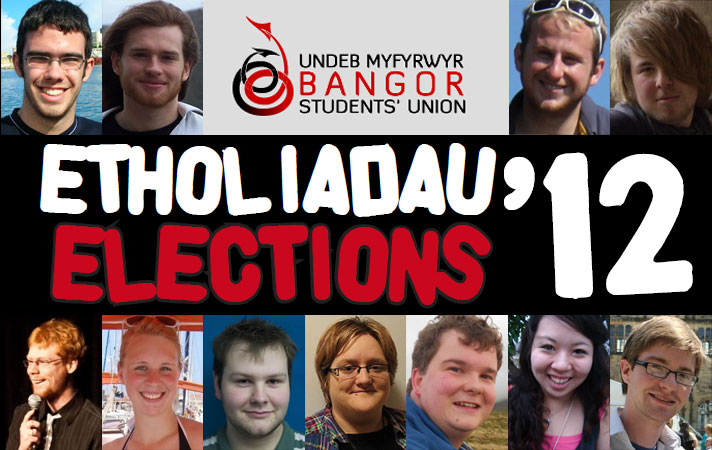 Budding candidates battling it out for a sabbatical position in Bangor Students’ Union next academic year have kicked off their election campaigns today as the campaigning period has officially begun.

Whilst some candidates have littered their Facebook profiles with campaign posters, others have been canvassing university buildings trying to persuade fellow students that to vote for them.

The campaign was up and running  straight away, with candidates for President and VP Education & Welfare participating in a question time session in the Wheldon Building this evening. For the first time the event was blogged  live on the web as events unfolded in addition to Storm FM’s usual live broadcast of the event. The live-blog also added an extra dimension to the questions as as it allowed them to be submitted live via Twitter and the Students’ Union’s own site. Overall this seemed to increase the involvement in the event and means that students who couldn’t attend can catch up on the discussion by reading the transcript online.

For anyone that missed tonight’s discussion there will be another one held this Friday at 7pm in Bar Uno on the Ffriddoedd Site. This second (and final) session will feature speeches and qestions for candidates standing for VP Sport & Healthy Living and VP Societies & Community.

The next week and a half is sure to be bustling with activity as candidates try to persuade  students to vote for them when the poles for the Sabbatical Elections 2012 open next Monday (19th March). Students will then have until 2pm on Wednesday (21st March) to place their votes online at bangorstudents.com

This year’s candidates are as follows: