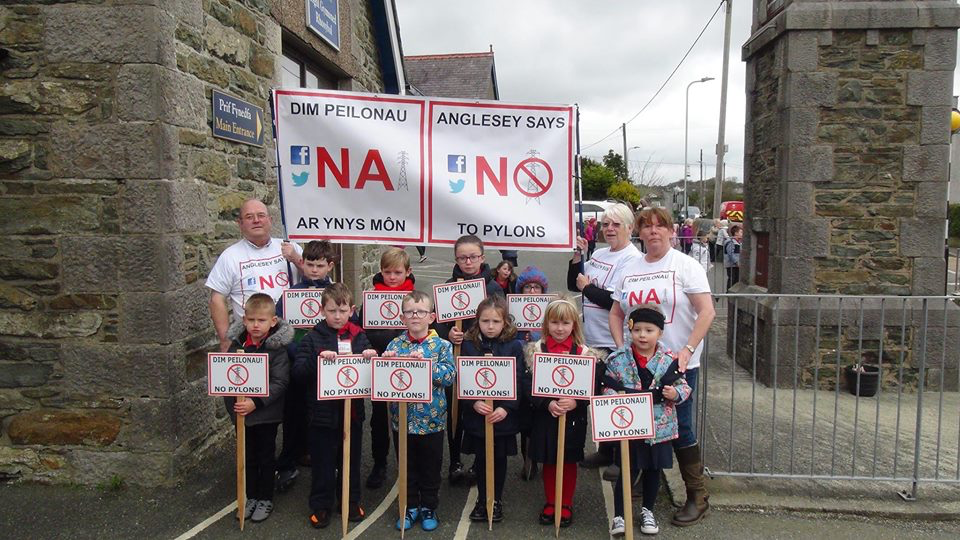 The local community of Anglesey gather support in order to protest the National Grid application to erect 100 new pylons across the island.

A plan to build power-lines across Anglesey from the proposed £12 BN Wylfa Newydd nuclear reactor has generated massive controversy. Residents feel that the new scheme would have a devastating effect, not only on the environment, but consequently on the tourist economy too.

The ‘Anglesey Say No To Pylons’ group have been rigorously protesting to protect their Island from plans by the National Grid. Over 13,000 people have signed a petition against the proposal, although permission has already been granted to begin clearing sites for the pylons. Currently, the application for building is being processed by the independent Planning Inspectorate.

Numerous amendments of the proposal have been made by the National Grid to relinquish feelings of unease amongst the local community but to no avail. The Islanders have proposed underground cables to be established as opposed to the overground network. This appears to be a non-negotiable point due to the financial burden it would incur. According to the Grid, it is the individual who would pay the higher cost in energy bills to abate the excess spending.

Despite the local objections, The National Grid feel that they will be contributing to the economy if plans are to be carried out,

“Our application is an important step in unlocking many millions of pounds of local investment and around 9,000 construction jobs that the power station will create.”

Residents remain steadfast in their view, following legal process to voice objections to the Planning Inspectorate. The outcome of the application is yet to be decided although you can be certain that the people of Anglesey will continue to voice their objections in the matter.