Dr. Sophie Williams returns to Bangor University to collect a Special Recognition award after a long journey to recover from Japanese encephalitis that she contracted during field work in China in 2015

A lecturer from the School of School of Environment, Natural Resources & Geography received a special award from Bangor University students.

On Friday 29th April, Dr Sophie Williams entered, to rapturous applause, a room packed with her students, colleagues, family and friends. On her first trip out of hospital for ten months she was at the University to receive an award for her incredible contribution to teaching.

The Student Led Teaching Awards are a special honour for an academic as the nomination, selection and presentation of the awards are carried out by the students themselves. Sophie was nominated by undergraduates of the School of Environment, Natural Resources & Geography (SENRGy) for a “Student Voice Special Recognition” award.

The event was opened by Professor John G Hughes, Vice-Chancellor. He recalled how impressed he was on his first encounter with Sophie during a ceremony to mark the start of the Two Dragons Garden project which twins Bangor University’s Treborth Botanic Garden with Xishuangbanna Tropical Botanic Garden in China. This was one of the many anecdotes of the afternoon emphasising Sophie’s strong communication skills – one of the many things which make her an exceptional teacher.

Professor Morag McDonald, Head of SENRGy gave a presentation covering Sophie’s contribution to Bangor and beyond. This included quotes from those who have worked with Sophie in the many training courses she has run in social research methods, conservation education and plant conservation from the University of Cambridge to Bangladesh via Mauritius and China.

Professor McDonald said: “Sophie is a truly inspiring lecturer, and it is wonderful that her first trip out from hospital was to receive this award from students who have benefitted so much from her passion and dynamism.”

A presentation from two of her former students on the MSc Plant Conservation course which Sophie founded in 2014 followed. The recent graduates told how Sophie always pushed them to challenge themselves and try things which they find difficult and that this has had a truly life changing effect. One former student, now curator of Treborth Botanic Garden, sent a video of congratulations from Xishuangbanna Tropical Botanic Garden in China where she is currently meeting colleagues and continuing the link which Sophie started.

The most important presentation of the event was of course the talk by three of Sophie’s current students. 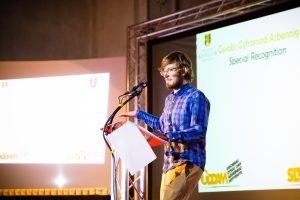 Sam Herniman, one of Sophie’s students, speaking about her at the SLTA ceremony

Sam Herniman, an Environmental Conservation student, said: “Sophie is way more than just a lecturer, she has been a catalyst for everything we have done over the last few years at Bangor.”

Alice Hadley, also studying Environmental Conservation, said: “Sophie has always pushed us to think more deeply and be the best we can.”

Despite being ill in hospital, Sophie has met with all three of these students to discuss their ongoing dissertation research.

The event closed with a few words from Mile Williams, Sophie’s father who talked about how proud he was of Sophie’s achievements. Mike said: “To see and hear how much Sophie is admired and respected by her friends and colleagues is very heart warming and confirms to us all not only how special she is but how much everyone is encouraging her in her recovery.”

The award ceremony was attended by some of the medical team working towards Sophie’s rehabilitation.

Karen Mottart, consultant in the Intensive Care and High Dependency Units at Ysbyty Gwynedd, said: “Attending this event has been an important goal for Sophie to work towards. It is wonderful to see her connecting with her life outside the hospital. We now need to plan with her the next trip out-Treborth Botanic Garden or even going up Snowdon on the train!”