An Interview With Hywel Williams 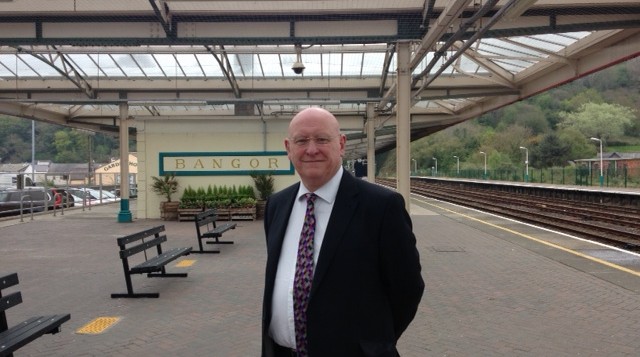 Hywel Williams, pictured at Bangor train station above, is a member of parliament for the Welsh national party Plaid Cymru and represents the Arfon constituency, which includes Bangor and the surrounding area.

At two minutes to nine, on a surprisingly dry morning, I entered Plaid’s office on Bangor High Street. The office (obviously adapted old housing) seemed small. I was instructed to wait for Hywel on a row of chairs, which gave a sense not unlike being in a GPs consultancy ward.

My thoughts of this comparison, however, were cut off as Hywel came in through the front door and greeted me. After doing so he spoke with his assistant in fluent Welsh, detailing his schedule for the day (I assume). I left the waiting room chairs and followed him through into a meeting room.

The walls of the meeting room were bare and an old hoover sat in a corner of the room, ironically, collecting dust. He wore a black suit with a blue shirt, top button undone.

Before the interview properly started he spoke jokingly about meeting strangers in the street, shaking their hands and telling them about himself. Maybe he was hinting at something. I’m just another stranger.

Pleasantries over, and now sinking into an easy flow of conservation, the interview began.

What do you think about the SNP holding the balance of power over a minority Labour government with the aim to amend budgets in Scotland’s favour, detracting attention away from Wales?

We’ve been in a relationship with the green party and the SNP for the last 5 years. And I fully expect if we hold the balance of power it will be SNP, Plaid and Green, rather than just the SNP.

There should be a reassessment of the funding Wales gets, we had the Silk commission and the Holtham commission looking into this, and they all agree that Wales [has been]underfunded at least by 1,2,3 or 4 hundred million pounds every year since the 70s.

What Wales has actually been offered is this: we won’t give you more, but we’ll make sure that you don’t fall below a certain point. After a lot of thinking we said that we’re not going to bother with all that; we’ll have the same as Scotland please. If we’re going to be equal with Scotland it comes out as £1.2Bn.

The reason for that is because they (Westminster) are scared shitless of the SNP.

Do you think because of the Scottish referendum the SNP have snowballed attention, perhaps more so than they could otherwise have done without a referendum?

What happened with the referendum was that suddenly people’s attitudes changed, the matter of Scotland became the matter of the UK. The SNP actually lost, but instead of having 20-30% of their hairy-kneed kilt-wearing friends all saying “Scotland the brave!” Lots of other people started thinking independence would be a good idea. Though they lost, they doubled in size. A poll last week showed that they have 52%.

The debate was crystalized in Scotland by the referendum.

There are 40 Westminster seats in Wales; only 3 of them are occupied by Plaid Cymru. Why is that?

In some ways, having 3 seats in Wales really is deceptive; in Wales we’re bigger than we appear.

We hope to retain all 3 [of our seats]; we have our eyes on at least another 3, maybe 4. That’ll be a minor earthquake in Wales, because we’ve had this long domination of the Labour party.

You spoke about the Welsh Assembly. Would you like to see the development of a Welsh parliament instead of an assembly?

Assemblies are better than parliaments, parliament is where you go to talk and shout at each other and an assembly is all the people together.

If you call it a parliament or an assembly it doesn’t really matter as far as I’m concerned, but what we want is an assembly in Cardiff with parliamentary powers.

Policing is the obvious one.

Because it’s one of the basic functions of the state. Health is devolved, mainly, but mental health law wasn’t.

How is Plaid Cymru planning to face mental health, and how do you think your experiences of working in mental health have shaped this?

I chaired the committee, and mental health law was transferred to Cardiff, in, I think two meetings.

Funding is essential. Mental health has always been the Cinderella of the National Health Service, but if you look at what happened in Wales; we’ve shut large mental health hospitals.

North Wales used to be served by one big hospital. At one time there were over 3,000 people living there, most of them didn’t need to be there. Now it’s been shut down and services moved out into the community, but inefficiently so. We need more community-based services.

It should also be destigmatised, people point, and I don’t think that should be the case. Make it as usual to see someone about the emotional distress as it is about getting your teeth fixed.

We need to change gear very very quickly, and massively on this issue.

The question that’s on every student’s lips: tuition fees. Could you outline the party’s policies on tuition fees and for supporting Welsh Universities?

We opposed tuition fees when Labour brought them in. I went to university in the 70s and 80s and I was actually paid to go to university. We are in favour of a universal system of higher education that’s free of fees.

Other countries do it, or they might make a nominal charge each semester, just to keep people engaged. That might be necessary, but who knows?

Some of the projections of student loans show that under half of students actually pay back their loans in full. The government will then by lumbered with a debt that they can’t resolve.

Science is an area of study that, at Bangor particularly, people are involved in a great deal.

As a previous member of the Science and Technology committee, how have you, and how will you (more importantly), underline the importance of science education and help to fix the gender gap in science?

We need to put a lot more money into research in Wales, we get 30 million every year less than you’d expect [in research funding].

The gender gap is really something that needs to be addressed. I think there are more women going into science now, but there’s a historical issue that we need to address.

– Marie Curie conducted pioneering research in radioactivity, developing techniques for isolating radioactive isotopes, and was the first woman to win a Nobel Prize.

I was listening to a radio program about Marie Curie, and it was her husband that was initially credited for the discovery. There’s an entrenched gender issue in science.

If you look at UKIP’s policy on foreign students, they say: “there should be ease of access for people who want to come and study the sciences”. And that’s the lads, you know, the boys section of higher education.

To summarise, what 3 key actions could a Bangor student expect from Plaid Cymru government?

We’d be pushing for better funding from the assembly, which means eventually better funding for public services in general, and certainly higher education (including research funding).

The second is a general one rather than one for the university: greater powers for the assembly. We have to have a more coherent system of government in Wales; our present government doesn’t work well enough.

And the third thing I’ll do if I get elected is that I’ll provide MP services like I have in the past. Solving all kinds of problems from immigration to benefits.