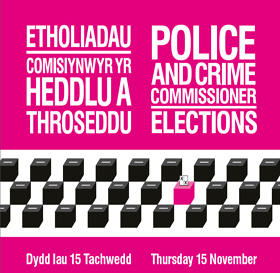 On November 14th 2012, forty-one individuals will become police and crime commissioners after pitching their vision for cleaning up the streets of England and Wales (excluding London, where Boris Johnson has taken on the role and duties of the Police and Crime Commissioner).

The Chief Constable of each of these forces will no longer be answerable to the Home Secretary, but to their PCC who, in turn, will be answerable to the electorate when the elections come around again. If there is a complaint against a PCC, then it would be taken up with the Home Secretary. There hasn’t been much significant talk about the powers of the Home Secretary or the general accountability of the PCC to the electorate; all we know is that there will be some local scrutiny of PCC work, but the panel will have limited powers to intervene. We need to make sure that there is no abuse of power by the PCCs and that it brings real accountability to the police system, in contrast to the police authorities, which have long been derided as invisible. The Whitehall targets on how to fight crime will be replaced by a political mandate from the local electorate, which is a significant devolution of power from a Conservative–led government, which isn’t the most likely of government to push power downwards.

For almost half a century, police in England and Wales exercised their powers under the “tripartite” relationship – a balancing of powers between:

In short, the Home Secretary set general priorities and targets and chiefs delivered, under the watch of the local police authority.

The PCC will be responsible for hiring – and potentially firing – the Chief Constable. They will set the policing budget and could increase the amount raised locally. They’ll be responsible for services for victims, and also manage grants for crime reduction and community safety. Each PCC will set a budget and a strategy that the Chief Constable will be expected to deliver.

How will all of this work in practice? Well, we don’t quite know yet – and that’s why the police are nervous. They fear that many candidates who can deliver a good sound bite will not have a clue about the delicate and difficult world of modern policing.

PCCs and their key powers: being able to hire and fire chief constables, setting the policing strategy, setting the budget, including money raised locally (the Police Precept) yet Chief Constables will retain operational independence

There are predictions that decisions will be influenced by party concerns, and that the careers of some of the brightest and best police officers will depend on how they cooperate with their political boss, effectively making it more selective and political.

If, for example, one of the candidates for the Chief Constable for North Wales had Plaid Cymru leanings and the PCC was the Labour candidate, how could that work? Could it work or is it a complete conflict of interest?

The Government believes it has all of this covered. While PCCs will focus on delivering their manifesto, they cannot tell the chief constables what to do. Senior police will remain in operational command, deciding how many officers go where and to perform which duties. PCCs will also be obliged to take an oath of impartiality, a public act declaring that they will be above party politics; yet most candidates will have been supported by a political party and the three main parties will be contesting the elections.

Ministers want the incoming PCCs to focus on two tasks: cutting crime and improving public confidence, because that is the issue on which the public will judge them when election day comes again- but what if the politicians and the electorate disagree? Which one will win out? If the Government thinks that one PCC is out of line in its approach of, for example, fewer police and reduced prison sentences and increased community work, would the government, in such a case, withhold money until the PCC follows the Government’s line?

Ipsos Mori, the polling agency, says that concern about local crime has steadily fallen while there has also been growing confidence in the police. It says the polling data shows people want their voices to be heard and a policing response that is visible and reassuring.

Ministers hope they have dealt with this in the legislation. The PCCs must “have regard” to national policing requirements. That is to say, a commissioner won’t be able to ignore legitimate demands to cooperate with other forces on tackling serious crime – or to assist in more prosaic ways, such as to provide officers to quell riots.

So after the tub-thumping at election time, an awful lot of this job for those who do get elected will be about hard negotiation in the boardroom between PCCs and chief constables over what is right for local people – but also for national policing.

This balancing act has always been a major challenge in policing – the question is whether the arrival of PCCs will make it more of a public debate.

And that brings us to a final very important responsibility for the first wave of PCCs. Many candidates rightly fear indifference and public confusion which will be the biggest stumbling block for both this project and individual candidates. The Electoral Reform Society has predicted a low turnout, while the Electoral Commission has its own concerns, including the Home Office’s planned advertising campaign.  The candidates will have to fight against massive apathy for the political system. I think there will be a low turnout for the first election, and when they come to re-election then there will be far more knowledge electorally about what a PCC is, and hopefully the media will cooperate in raising the profile of this exciting development in local politics and any diversion of power from the central government to local areas is good. The criticism of PCCs is that their electoral wards will be far bigger than can actually be effectively managed so they will be in essence figureheads with no real power or influence.