All about that Anaconda 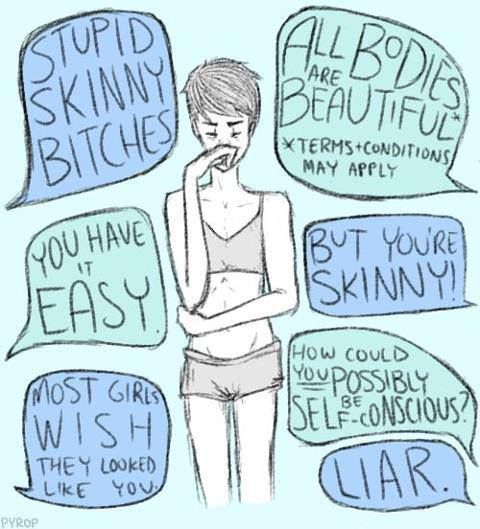 Lately there has been a trend in pop song lyrics to concentrate on plus-size women celebrating their shape. Examples of this have been such recent hits as Nicki Minaj’s ‘Anaconda’ and Meghan Trainor’s ‘All about that bass.’ Both of these songs have been referred to as ‘empowering’ and ‘feminist’ by music critics and the general audience, with a strong message of ‘body acceptance.’

This is true, both of the mentioned songs have lyrics that feature women who are very confident about their size, stating that ‘he can tell I ain’t missing no meals’ and ‘every inch of you is perfect from the bottom to the top.’ Being plus-size is unified with confidence, awareness of sex appeal and popularity with (in case of both of these songs) men. This type of confidence and self-acceptance can indeed be seen as a very positive change of a trend in pop music. I’m all for standing up to general constricted beauty standards, but I still find this type of empowerment extremely worrying.

While both Nicki and Megan praise their own size in their songs, they end up putting down other people over their weight. Both of these songs worryingly refer to skinny people as ‘skinny bitches’, a name that is in no way empowering nor acceptable.  I have always been slim and come from a family of skinny people. I was born with my body type and even though I have never worried about my size, I know from other people that being skinny can be just as difficult and upsetting as being overweight. Body-shaming is not OK, no matter which “positive” headline it’s done under.

Also once you start analysing the content of both of these songs, the positive body-image expressed in them does not really originate from confidence as much as from insecurity. An especially worrying example can be found in ‘All about that bass’, where the lyrics state hidden between the catchy chorus that everyone remembers: ‘I’m bringing booty back/ Go ahead and tell skinny bitches that/ No, I’m just playing / I know you think you’re fat.’ Gaining your confidence from someone’s assumed insecurities is not exactly empowering. That makes the positive message they carry even emptier than it already was. This is not confidence. It’s insecurity.

Why can’t we have songs that are actually empowering, celebrating ALL the shapes and sizes we come in; without putting down others in the process? Empowerment built on bullying is not empowerment at all, it’s just bullying.

How the Music Industry has responded to Coronavirus