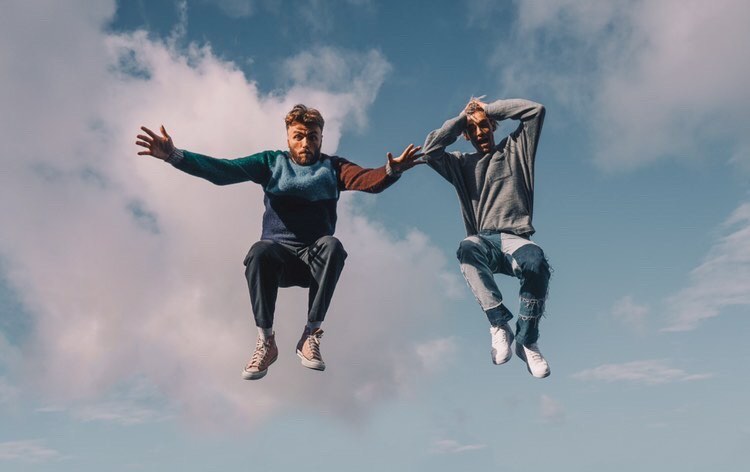 Scottish duo HYYTS are redefining Pop music with their idiosyncratic style. HYYTS new single ‘Lonely People’ presents a delicate blend of club-culture and existentialism, resulting in not only a relatable song but an inexplicable need to ‘move your body on a Tuesday night’.

From titling their first EP Eepee and reimaging their own songs in different genres, there is jovial nature to this duo that is evident in the way they discuss their work. I caught up with HYYTS in conversation on musical inspiration and continuing to keep a positive outlook while releasing and writing music in a national Lockdown.

How did you come up with the name HYYTS and can you please clear up confusion on its pronunciation?

It’s pronounced like ‘heights,’ and I wish we had a good story about what it means (probably just going to make one up soon) but we really just wanted something weird that people didn’t really understand at first. That’s kind of what we’re going with our music, so we wanted the name to do the same.

There is an inherent sense of nostalgia throughout your discography, it seems to have an ever-growing prevalence, especially in your latest release ‘Lonely People’. I wondered what this song means to you?

We’ve been getting very existential with our lyrics. I don’t know why but I’m glad you’ve picked up on it- most of the things we’ve been writing recently have been about growing up and trying to work out who you are in the world. I guess we’re just becoming sentimental old men. ‘Lonely People’ is really important to us- it sums up a lot of our feelings about the big picture of things; go out and get hurt and be part of the world cos feeling anything is better than closing yourself off.

The cinematography of both the ‘Dream Killer’ and ‘Low Sound’ videos hold some powerful juxtaposing imagery, capturing the quotidian details of life on  working-class estate and club-culture – what inspired you to bring these two things together?

Contrast is definitely one of the things we always try to play with – nice sounds with alarming images, manic production with gentle lyrics- we’re always trying to do things like that. We grew up in Glasgow, so I think those two things are so a part of that culture that it’s unavoidable and we wanted to put a wee bit of where we’re from in what we do, so I think that’s why that’s there. To be honest though, a lot of the time we just do what we think looks or sounds good and then after we realise the meaning behind what we were doing- very weird how it works that way.

Obviously, the world has come to a bit of a standstill with the Corona Virus this year, perhaps the Arts industry more so than any. How have you found the disruption of Lockdown alongside music making?

Yeah it’s been really tough, firstly I think we’re really really lucky that we’ve been able to keep making music and doing what we love together, a lot of people have had it much worse off than us but it has been tough and missing out on gigs has especially been hard. Playing live is our favourite part of this job, so it’s been quite weird going from gigging all the time to not at all. I think the anxiety and unsureness has bled into the music we’re making for sure, also there’s a lot more time than before so that’s definitely impacted how we make music- going over old songs, taking more time over little things.

A big part of being a musician is the live performances, what have you missed the most about gigging and where are you looking forward to playing most when things eventually get back to normal?

Oh my God we can’t wait to play live again, I think that connection of feeling people picking up what you’re putting out and sending it back to you in a dark sweaty room somewhere is the best feeling in the world, and that’s definitely what we miss the most. Our dream is definitely to play the Barrowlands (a live music venue) in Glasgow, but I don’t think we’re quite there yet. We had some fab stuff lined up though – support tours and tours in Europe and the UK and even a couple dates in America so we really can’t wait to go and do all those things- getting to see new places, and meet cool people, and play music is our wee dream come true so yeah can’t wait!

Finally, every band has its own methods and own dynamic but if you could spend a week with any band, past or present, who would it be and why?

Oh! That’s such a tough question! I would have loved to be there when Fleetwood Mac made rumours just because it’s one of my all-time favourite albums and it would’ve been such juicy gossip to see it all unfold. Also, would’ve loved to see Chic or one of the other ultimate disco acts work and go to studio 54 and all that. I would also give anything to work with Grimes. There’s too much to choose from, I could talk all day.

I’d like to thank you for your time you’ve taken to answer these questions and I can’t wait to see what the future has in store for HYYTS.

HYTTS single ‘Lonely People’ is out now and is available on all streaming sites.