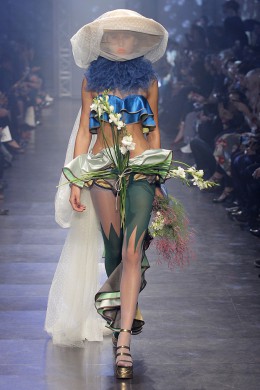 Vivienne Westwood, a Dame in the fashion world, and one of my all time favourite designers, has recently released her new show ‘Mirror the World’ as part of her Gold Label collection. Her inspiration is the magnificent city of Venice, and saving this ‘emporium of culture’ (and of course everything else) from climate change. Yet I must admit, I am a little unsure as to how global warming immediately connects to her designs, but in her pre-show film she mentioned an idea that struck me, that to be as beautiful as the world, one must engage with the world. The fact that society and the worldly influences around us can effect how designers think is surely obvious, but it is typical of Westwood to fuse together her sporadically conflicting politics and fashion in one explosive event. She is after all a long standing, passionate campaigner for the environment, currently she has designed a Christmas tree which is standing in one of the most fashionable buildings in London, The Shard, all in support of Cool Earth. Likewise if she’s not being heard she has absolutely no problem in driving a tank across Oxfordshire to David Cameron’s house. If nothing else her campaigns certainly keep her in the media lime light.

There isn’t much Vivienne hasn’t done on the catwalk in her 74 years, she has dressed the likes of Princess Eugenie and Gwen Stephanie, and her designs have even featured in films, such as Sex and the City. Thriving across the world, are many Vivienne Westwood high-street stores, soon a new print called Salva Venezia (Saving Venice), which reiterates the main theme of this show, shall be appearing on the shelves. But I think the inspiration of ‘12th Century prosperity’ in the rich people of Venice and their investment in ‘expensive design’ must be where she finds the inspiration for her price tags too.

Bathed in the light of a blue lagoon, the collection follows her renowned eccentric style, all about experimenting, centred around strategic structural folds and deconstructed dresses designed for both men and women to wear. Her idea of unisex tailoring again features as an intrinsic element of this collection, it is one of the first times I have seen fashion escape a label of identity, which when surrounded by a language built for clarity, is quiet impressive. Some of her team have argued that this is unisex fashion is very sexual, simply because it is new and exciting, allowing you see people in new ways. Furthermore, the sometimes not to subtle hints of harlequin design, mirrors this idea of having no identity, influenced by the carnivals of Venice, disguises and costumes that make the impossible possible, the poor become rich, ugly become beautiful and men become women. My favourite aspect of these designs, however has to be the head-dresses, inspired by the exquisite masquerade masks it really highlights that anyone can change identities. 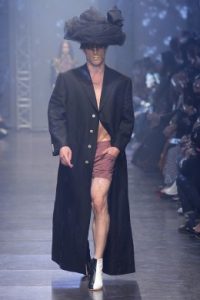 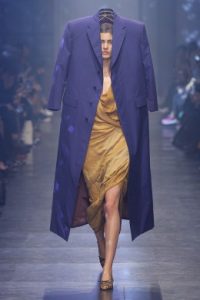 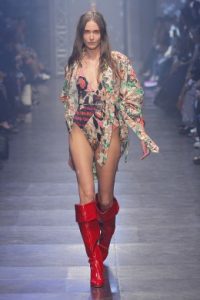