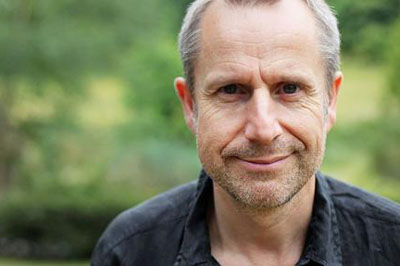 Jeremy Hardy has 32 years of performance in stand-up, shows on Radio 4 (Jeremy Hardy Speaks to the Nation, The News Quiz…), which has run for ten series, appearances on TV and a few films all under his belt. What is so particular about this comedian is that he is widely known for his political views. Not only is he firmly left-wing but he also happens to be a 25-year-old friend of Jeremy Corbyn, the new Labour Party leader. In a recent interview with Seren, he talks about his upcoming show in Pontio on the 20th of May and his insights about recent news as well as the importance of the comedy to make earth a better place to live.

Have you toured in North Wales before?

“I’ve been to Bangor before and Caernarfon. I liked it very much. It’s really nice, especially if you have time go in the countryside.”

What can we expect from your show?

Is comedy an important vehicle for political opinions?

“I don’t think it’s necessarily important, I just think it’s how human beings connect with each other. We use humour to protect ourselves, it brings us together. It is an elemental human thing. I suppose it is better to communicate your idea in an entertaining way. I also think that when you write a comedy show you write about what you’re interested in. If I’m talking about surveillance within society and the future of NHS, it’s because it’s something I am concerned about and I want to share. I don’t necessarily see myself as being on a mission. Some comics talk about their culture, their everyday life, their ethnicity or gender… I am a white middle-class male so I am not so different to most other people in the country.”

Is there a border a comedian should not cross when it comes to defending political views?

“You have to be careful not to become too didactic, not to overload people with data. I’m not there to give out data or statistics or too much detail. It’s kind of a therapy for me but I try not to be too angry or shouty, that could be a bit unexpected. It could scare people off. Even people who agree with you want to have time out from the all the issues. People who come [to comedy shows]most of the time already agree with you, they come to relax. It is important to remember that.”

What do you think of the election of Sadiq Kahn, the son of a bus driver who ran against the son of a millionaire, as a mayor ?

“I think people don’t bother about having a mayor that is a son of a bus driver until they are faced with an alternative who is a preying posh bully. It has to do with what people assume they would be like. Goldsmith made a terrible error in bullying Sadiq because he came from a working-class migrant family. You have someone who worked very hard to get to politics and a multi-millionaire messing around in politics for fun thinking he can just link people with terrorism to discredit them. If Goldsmith had a better politic campaign, he would have had a chance. He is an environmentalist and had an interesting program but he thought he could win by playing on people’s fear of extremism and terrorism.”

How do you think will it affect Jeremy Corbyn ?

“Well, it’s a weird one because it shows we need to be much more centrist. A lot of Corbyn support has campaigned with Sadiq. I voted for Sadiq because Corbyn is the leader of the Labour party, if Labour had a different leader I’d of probably voted Green. People shouldn’t underestimate how much support Corbyn brought to the labour party, how many new members.”

Do you believe in Brexit ?

“I think London is pretty much ‘in’ because it is really multicultural and connected to other countries. It’s actually a world city. And it has been for a long time, with people from all over the world coming to work in cafes and shops. And I think it is something people enjoy very much. It is a liberal left city, which I think is for staying in Europe. I think most people who want to leave have fallen into some kind of disaffection with Europe. They forgot what Europe is about. It’s a current phenomenon, people feel they don’t have much so they want to clench on to what they have: traditions and ethnical identity. This is a “You might not have much but at least you’re British” kind of mentality. People are also worried about wages being cut under the Labour Party. And a lot of people are scared of immigrants.”

Do you think comedy can help combat the fear?

“I think it can, yes. It can make people be a little more relax. By making people laugh at their prejudices it undermines them more effectively than when people attack them in an angry way. If you attack people they will withdraw, but if you can make them laugh about their ideas, making the ideas seem stupid, it can be helpful. I don’t do my gig as a kind of campaign, I do my gig because that’s what I’m interested in, but I think it might help. It makes the world a warmer and more relax place if everyone is a bit calmer and happier. If, when it comes to things that are a bit spiteful, people just punch others down it makes the world a worse place. But if people are pushing upwards and attacking establishment prejudices and injustices then I think it makes a healthier society.”