Day of the Doctor 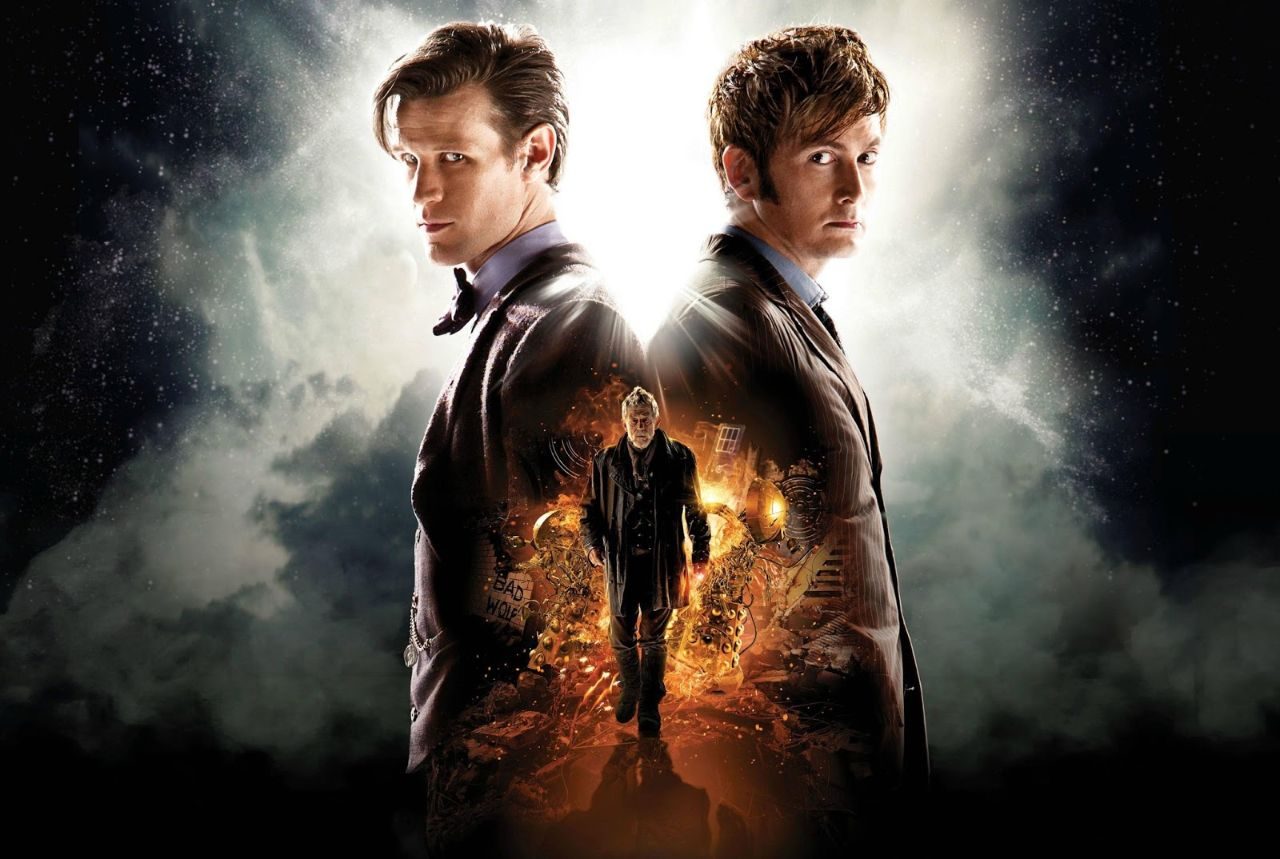 At over 1200 years old and after saving the world countless times, it’s not surprising that the Doctor has a huge collection of friends and fans, and last month we all got together to celebrate his 50th anniversary in one blockbuster of an episode. The buildup was spectacular, the aftermath remarkable but what about the episode? After months of speculation and waiting, did Steven Moffat’s ‘The Day of the Doctor’ give Earth’s greatest hero the birthday he deserved?

When those now famous time vortex titles first hit the screen in 1963 it marked the beginning of a new era: William Hartnell’s first Doctor was about to change Saturday nights forever. And so it was not only fitting, but touching, to revisit those same black and white titles exactly fifty years later as ‘The Day of the Doctor’ began. Not only that but the ‘New Who’ team beautifully recreated ‘Classic Who’s’ very first scene as a police officer wanders past a sign for ‘I.M Foreman Scrap Merchants’, the place where the Doctor was so famously encountered fifty years ago. It’s enough to make fans both old and young feel a pang of nostalgia.

The sign and the vortex, of course, aren’t the only references Moffat and co. throw our way in this hour and a quarter episode, but they certainly do a fine job at setting the bar high for the rest of the evening.

“He is my secret”

‘The Day of the Doctor’ in a way was a continuation of season seven’s grand finale, ‘The Name of the Doctor’, back in May this year. Whilst the episode still did not tell us the Doctor’s real name it did introduce us to John Hurt as the Doctor.

For fans of the show it has been a long wait swamped with speculation and excitement. It was a real first for Doctor Who. We’ve been used to getting new Doctors but never before have we had a supposed past Doctor that we’ve never met. An interesting twist is exactly what Doctor Who is about and Steven Moffat provided more than one.

“I’ve had many faces, many lives…”

And for the 50th anniversary not even two versions of the Doctor were enough and so fans were treated to the long-awaited return of perhaps the most popular Doctor to date, David Tennant. It was announced back in May that the Doctor’s Tenth incarnation would make an appearance, along with Billie Piper, and is likely one of the key points of excitement for the Who-niverse.

Whilst we had no idea how Ten would return; whether it would actually be him, a flashback, his human clone or even the version of him encountered in Trenzalore but we knew it was going to be brilliant. And brilliant he was. Since we last saw him on Trenzalore, where Clara discovered his secret (John Hurt’s War Doctor) our hero seems to have parted ways with his feisty companion. Clara is now a teacher at Coal Hill School, where the show first began back in 1963, yet the second the Doctor calls upon her she hops on her motorbike and straight into the TARDIS.

Before we can find out why the Doctor drafted in his most important friend the TARDIS is lifted into the air and essentially kidnapped. It’s a great scene for the 50th anniversary that reinforces how truly British the show is as the, also quintessentially British, blue box is transported across central London with the Doctor hanging off the edge.

It turns out U.N.I.T. are behind the ‘kidnap’, prompting the return of Jemma Redgrave as Kate Lethbridge-Stewart as well as a very familiar looking scarf, under orders of Queen Elizabeth I. Some four hundred years earlier it would seem that the Queen acquired a piece of Time Lord art, a 3D painting of the last day of the Time War entitled ‘Gallifrey Falls’. It’s more than enough to get the Doctor interested and provides the perfect way for the Doctor Who team to wow their 3D audience. It also serves as a great plot device to give us a recap on the Time War and how John Hurt comes into it.

“Today this war will end. No more.”

We are cleverly transported through the painting and into Gallifrey at the fall of Arcadia, the Doctor’s darkest day, where the plot wheels are really set into motion. After a long time of staying away from the Time War, the Doctor realises he cannot allow it to continue, “I have stayed my hand too long. No more”. Although he knows the consequences will be dire, and that he won’t be able to live with himself, he makes the decision to destroy his people to save the world from the wrath of the Daleks.

It’s a decision brings him to encounter Billie Piper in a role that we didn’t quite expect to see her in and which brings the War Doctor, the Tenth Doctor and the Eleventh together in an adventure that could change everything.

The 50th anniversary sees the return of one of the Doctor’s oldest enemies; the Zygons. And in this episode they are not only wreaking havoc on Elizabethan Britain but present day London too!

All in all the hour and fifteen minutes of the episode is a busy busy time for the Doctors who not only have to spend a lot of time trying to be the better Doctor but they must understand why they’ve all been brought together, fight the Zygons, stop U.N.I.T from blowing up London and all whilst the War Doctor is about to live their darkest day.

Whilst the episode isn’t as action-packed as some it is a thrilling emotional ride that leaves you more than excited for the Christmas special and the subsequent series; the future of Doctor Who.

For those of you who are crazy enough to have not yet watched ‘The Day of the Doctor’ (ten times at least) we don’t want to spoil it but Moffat has done an amazing job. I have to admit that whilst watching I was a little unsure whether I was enjoying it or not, it felt like a lot was happening but at the same time it wasn’t. And then the final twist hit with a bang! Everything I knew about Who, everything that has happened since Christopher Eccleston took up the reins in 2005 was about to change. As the Doctor would say; time can be rewritten.

The Who-niverse has waited a long, long time for this special and the Doctor has waited even longer. I have to admit that ‘The Day of the Doctor’ wasn’t the best episode of the show that I’ve ever seen but for a 50th anniversary it couldn’t have been better.

Without revealing too much I absolutely adored how everything is about to change and it feels like we’ve gone full circle, especially with Peter Capaldi about to come in a likely grumpy and older manner. I loved the constant references and there were certain scenes that were nothing less than perfect – a Dalek crashing through a painting, 13 Doctors working in unison – and then on top of all that David Tennant was back.

Whether you are a regular viewer, haven’t watched the show in years or never before watched Who you need to see ‘The Day of the Doctor’. Yes it’s better if you’ve been watching previous series and know what’s going on but to be honest it doesn’t even matter that much. One thing I will say though is after watching this beast you’ll likely be tuning in on Christmas Day and beyond.