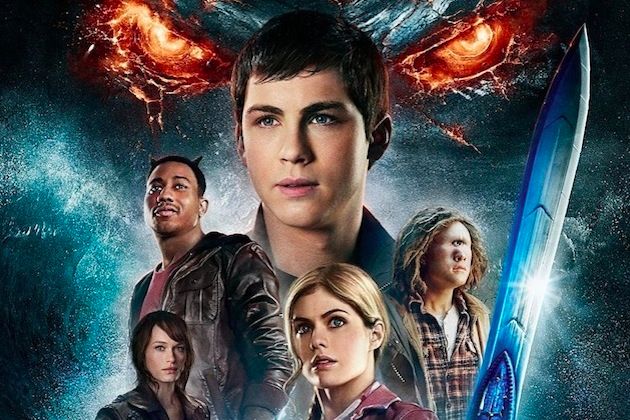 After finally accepting his demi-God status and saving the world from near destruction at the hands of a fellow demi-God, Percy Jackson (Logan Lerman) is living the life at Camp Half Blood. That is, until his confidence takes a beating and a giant bronze bull breaks through the camp’s protective barrier, hurling Percy and his friends onto a journey to find the Golden Fleece.

Sea of Monsters’ plot stems from the story of Thalia, daughter of Zeus, who gave her life many years ago for three friends: Annabeth (Alexandra Daddario) -daughter of Athena-, the satyr Grover (Brandon T. Jackson) and the first film’s baddie, son of Hermes, Luke (Jake Abel). Unable to let his daughter die, Zeus saves her in the only way he can, turning her into a great tree that guards Camp Half Blood, thus creating a protective barrier between the camp and any future danger.

However, Luke returns from his defeat in The Lightning Thief, still intent on destroying the Gods of Olympus and poisons Thalia’s tree. With the barrier is destroyed, the camp’s demi-Gods must find a way to retrieve the Golden Fleece which is said to have the ability to heal anyone and anything. And so begins the quest of hot-shot demi-God, and daughter of Ares, Clarisse (Leven Rambin) with the help of Percy and his friends, of course.

Sea of Monsters is an action-packed, fun-filled, thrill ride through Greek Mythology with ingenious modern twists. From the three eye-sharing taxi drivers based on the Graeae of mythology to the Thermos containing the four winds you can rarely go a moment without a nod to the stories of old. 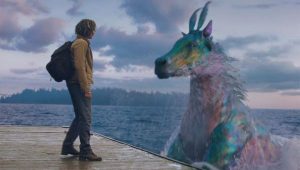 While most of the cast from the first film return -bar Pierce Brosnan who is a little randomly replaced as Chiron by Anthony Stewart Head- Percy 2 simultaneously introduces us to a number of new characters. One of the main new characters is the cyclops Tyson (Douglas Smith) who comes to Camp Half Blood claiming to be the son of Poseidon, making him Percy’s half brother. It is Tyson’s relationships with the other characters that lie at the real heart of the movie, he is essentially the new kid, the one who doesn’t fit in and who has to prove himself to his friends. It’s a typical character development that we see in a number of films and tv shows these days but what is nice is that he isn’t the main character, it feels fresh to have a supporting character make this transition rather than the hero.

One of the best parts of the film comes from Nathan Fillion of Firefly fame’s appearance as Hermes, the messenger of the Gods. Our heroes find him in the most unlikely yet likely place: A UPS Depot. Not only is he good fun but he is the only Olympian God we actually see in this film as opposed to the whole ensemble from The Lightning Thief. He gifts the gang with parcel tape which will delete anything it borders and the Thermos of Winds featuring a Hercules: Bust Heads tv show design, prompting a blatant Firefly reference. It’s a perfect moment for any Fillion or Firefly fan.

Whilst it isn’t essential that you see Percy Jackson and the Lightning Thief before seeing Sea of Monsters it would make sense and you will definitely appreciate and understand the second installment it more if you do. The second in the franchise doesn’t differ too greatly from the first but it does feel a little more grown up, we know the characters and we know the world, so we’re straight into the action and it feels like more is at risk. Or is that perhaps something to do with Luke’s threat of resurrecting Kronos, the most evil of all the Titans?

Despite the more grown up characters, the film offers little chance for any character development and it feels as though Percy does little more than fight a few monsters before going home in time for dinner. The only development we see is from Tyson and co-newcomer Clarisse.

The film is definitely worth a watch, or two, whether you’re looking for somewhere to take the kids in these last few weeks of summer, just fancy an afternoon at the cinema or like me, are a big kid at heart. It’s definitely an exciting hour and half and it’ll help you brush up on your Greek Mythology.