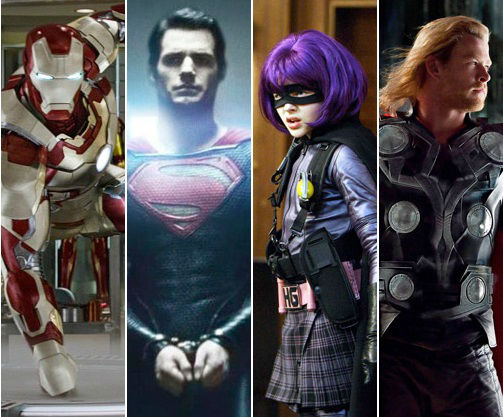 We dive into our 2013 superhero movies with Iron Man 3. Robert Downey Jr. reprises his role as Tony Stark, out to find the people who ruined his life and take down the deadliest villain he’s faced yet: The Mandarin. The film also stars Ben Kingsley, Guy Pearce, and Don Cheadle.

Zack Snyder’s Man of Steel plots yet another origin story. Superman, played by Henry Cavill, is adopted on Earth and grows up to discover and use his powers to protect the world that he loves. Christopher Nolan worked as executive producer on the film, which suggests this Superman movie won’t be what we are expecting.

Chloe Grace Moretz returns as Hit Girl in this sequel, which follows Kick-Ass (Aaron Johnson) as he joins with a group of regular people who have been similarly inspired to don costumes and fight crime, among them Jim Carrey. Meanwhile, villain Red Mist (Christopher Mintz-Plasse) is putting together a revenge plot.

The action picks up after the events in The Avengers and Thor (Chris Hemsworth) must fight against an evil race led by an angry and powerful elf king, who wants to destroy the world. With Anthony Hopkins, Idris Elba, Natalie Portman, Tom Hiddleston and Christopher Eccleston (Doctor Who) as the villainous Malekith.