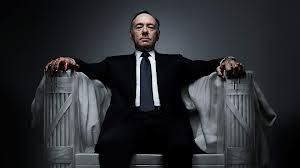 House of Cards is a political drama based around Frank Underwood, a manipulative US congressman played by Kevin Spacey, using those around him to further his own political ambitions in a modern day game of thrones. It is based on the original series of the same name, which unlike the new series, was set in the British political world. House of Cards is the first Netflix exclusive TV series; it was entirely financed by Netflix, was only released on their site, and released all at once, rather than on a weekly basis. This has allowed people to turn into overnight fans by watching the series in a very short time period.
The series begins when the newly elected President reneges on his promise of making Underwood the Secretary of State for the new US government. This sets in motion both Underwood’s desire for revenge and his more vicious political ambition.
Kevin Spacey leads an amazing cast, who seem to naturally work well together. This may have been a result of David Fincher, the series director, getting all of his casting first choices. Zoe Barnes, who is played by Kate Mara, is a reporter for The Washington Herald. Desperate for a break, she makes a deal with Frank for insider information. Her character shifts from being innocent, to an individual who is almost a diluted mirror of Underwood’s manipulative ways. Underwood’s wife, played cold-heartedly by Robin Wright, is a highlight of the cast. Their relationship is described by Frank, in that he loves her as: “A shark loves blood”, a very fitting description. Corey Stoll puts in a standout performance as US representative Peter Russo who is plagued by his own alcoholism and drug abuse. His push to recovery by Underwood, whilst never seen as a caring act, is put into a new light by an end of series revelation.
After watching the series, I hope that it is renewed. It takes ideas from the original series, and there are two other series they could pull ideas from, so extra material is not lacking. However, whether or not this happens will rest heavily on the success of this new release format, and whether it contends with traditional TV release methods. But House of Cards is a sharp political drama, a true tribute to the original series, and deserves all of its success.