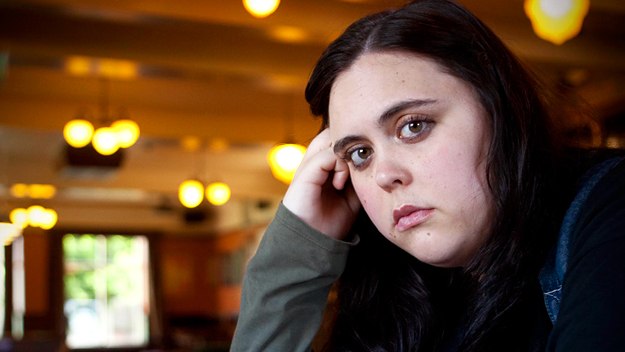 I think the only thing that enticed me to watch this programme was the slow-mo advert of a guy being hit in the face with a sausage. “I want to find out if there really are any cool people in Lincolnshire” asks 16-year-old protagonist, Rae Earl. “Probably not,” I thought to myself, but decided to tune in regardless.

First impressions: Tracy Beaker meets Skins. Oozing with insecurity, angst and sexually frustrated humour, it’s certainly an acquired taste aimed at the younger viewers who were undoubtedly still in Pampers when Rae was writing her diary. Consequently, it doesn’t leave you holding on to your sides, though it occasionally boasts some unique and priceless moments able to give your funny bone a good tickle: “I look like minced meat in a condom!” is probably my favourite line from the first episode – and any show I’ve recently seen, for that matter.

Set in 1996 (probably the best thing going for it), we start off in a psychiatric home just as Rae is being discharged. Plagued with low self esteem and some severe insecurities, we follow her as she embarks on a mission to find cool friends, have sex and gain confidence, all-the-while determined not to let her supposedly dubious mental wellbeing get in the way of having a good time.

From what I gathered from the first episode, Rae has two main interests: music and men – specifically men who can satisfy her “raging horn.” The openness about sex in My Mad Fat Diary was surprising, but instead of another sexy, unrealistic approach (I’m looking at you, Skins), what this show has is much more boisterous and in-your-face. Paired with the issue of mental health and insecure adolescents, a lot of people, young and old, will no doubt relate to the challenges facing Rae.

I was reluctant to switch over to My Mad Fat Diary; with initial fears of a bad attitude towards mental health, and the ever-present ‘not-another-Skins’ worry, I wasn’t expecting to be looking forward to the second episode. If you haven’t already, I’d catch-up on this – if only for the nostalgic soundtrack (including: Eels, Oasis, Pulp, Blur and Beastie Boys) and the refreshing setting of a pre-Facebook era. Most of us were probably trading Pokémon cards in 1996, not yet old enough to partake in underage drinking, nor old enough to have developed a lust for everything and anything sexual, but this insight into teenage life in the 90s is a surprisingly cracking piece of television.