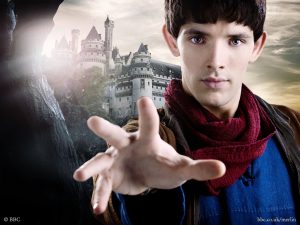 As the countdown to Christmas begins, fans across the globe prepare for the hit BBC show Merlin to air its final episodes.

The show, which some believe has been axed when in reality had always been planned to only ever have five seasons, was first aired on 20th September 2008 and is loosely based on the Arthurian legends, following a young Merlin (Colin Morgan) and his adventures with Prince Arthur (Bradley James). Merlin, a young wizard, is sent to Camelot by his mother, who sends him to stay with the court physician Gaius (Richard Wilson). With magic being outlawed in Camelot, Merlin has to undertake his destiny of protecting and guiding Prince Arthur without his natural gifts being discovered, in the hopes that one day the future King will bring back the land of magic once again. The task proves to be difficult however, as the duo face many obstacles in their path, one being the king’s ward Morgana (Katie McGrath), who proves to be a powerful sorceress who wants Camelot’s for herself and will do anything to get it. While Merlin and Arthur are not friendly towards each other at first, the audience have watched their bond and camaraderie grow stronger with each passing episode.

The characters of Lady Guinevere (Angel Coulby) and the Knights of the Round Table are also loved just as much by the fans as the main pair for what they contribute to the storyline, as well as their rapport with one another, namely the knights Sir Leon (Rupert Young), Sir Gwaine (Eoin Macken), Sir Percival (Tom Hopper), Sir Elyan (Adetomiwa Edun), and the more recent addition of Mordred (Alexander Vlahos). The large cast of Merlin and their talent makes the show what it is.

While the show started off with mixed reviews, it has gone from strength to strength throughout the seasons. Now standing at 62 episodes, Merlin has starred many a big name over the years, including that of Anthony Head, John Hurt and Michelle Ryan.

Though Merlin now starts to draw to a close, leaving fans of the show devastated, it could be said by some that a glimmer of hope remains as the possibility of a spin-off is being discussed, though some fans feel that the show should be left as it was intended to end.

While I’ll be watching the final episodes with a bunch of tissues and a lot of snacks ready for the emotional rollercoaster to come, the questions that remain to be asked are these: What will happen to the cast once their journey with Merlin ends? Will there be a spin-off series and could it tarnish the show? And most importantly, when will Merlin’s magic be revealed to everyone, though more specifically, to Arthur?!