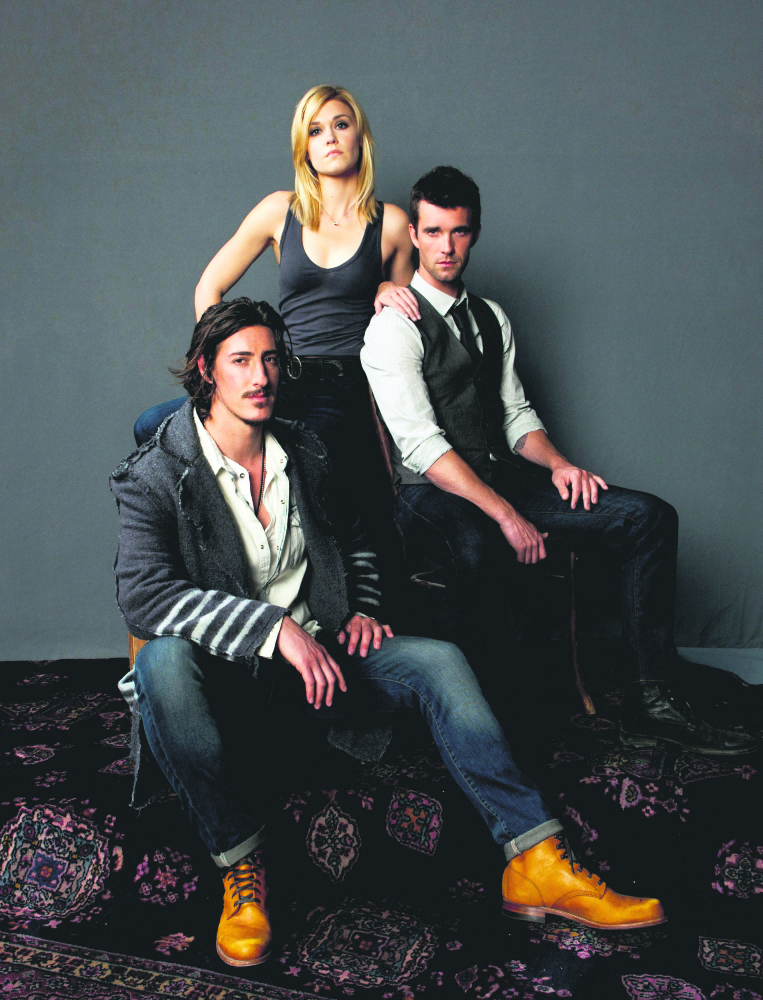 It’s just past 7.30pm on a cold, wet evening in Wales. I’m on the phone to Sam Ernst, Haven’s co-creator and writer, who makes a point to tell me how he’s sat outside, in shorts, with the sun shining down on him. He is sorry for the winter I’m about to experience,though.

Along with regular writing partner Jim Dunn, Sam turned Stephen King’s little-known novella ‘The Colorado Kid’ into a supernatural drama starring Emily Rose, Lucas Bryant and Eric Balfour. Haven follows FBI Agent Audrey Parker (Rose) as she finds herself in the small town of Haven, Maine where not everything is how it should be. Audrey soon joins Haven PD and works with local cop, Nathan Wuornos (Bryant) to keep Haven safe from the mysterious ‘troubles’ that plague the town. Now onto its third season, Haven’s secrets are finally starting to be revealed. The plots touched on in the previous season will finally be fleshed out, and Duke (Balfour) has discovered a trouble of his own!

Haven is based on the Stephen King story ‘The Colorado Kid’; at what point did you guys decide, ‘right, we’re making this into a show’?

The producers actually approached me and Jim [Dunn] with the story and said, ‘Here, read this, is there a TV show in this book?’ There was no show. The Colorado Kid is such a small story and there’s nothing supernatural in it. So eventually we added in all the supernatural, it was a very loose story to work with. We tried to put in the book characters, but there was so little of them. I think only the Teagues, Vince and Dave, are characters we used from the book.

Being co-creators do you and Jim have a lot of creative control over the show?

Yeah, we come up with the main arcs and that. We’ve probably written about 12 episodes, we have a writing team and there’s such a short space of time in TV to work on it. With movies, you have a couple years to work on 90 minutes, but with TV it’s just months. 10 months to make 13 episodes, for us at least. We went to the MCM Expo in London after season one and Jim started coming up with season four. We went for a romantic walk by the Thames, well I say romantic, it was me and Jim, and we started coming up with the arc for season three.

What about casting? Did you guys have people in mind beforehand or any input?

Not really. The character Audrey Parker – the name comes from my wife’s Welsh side – is named after my daughter and modelled after my sister. Nathan – me and Jim went to college in Minnesota and we owned a restaurant there; we knew this guy, he was really stoic, a man of few words and we thought, lets write this guy. Duke – he can say all the stuff that we are thinking but can’t say, and he was a great antagonist for the Nathan character. The actors are pretty darn close.

Eric’s a friend of a friend and he was the last to audition for Duke. Everyone else had been playing him sleazy and Eric was just so charming. I mean he’s charming in real life but he brought that across to the character. The funny thing about Lucas is that he’s the complete opposite of Nathan. He’s goofy, he’s outgoing, he’s a jokester.

We had no idea who Adam (Copeland, ex-WWE superstar Edge) was. We decided we wanted a wrestler because the show was on after it and we thought maybe it’d pull in some wrestling fans. We’ve no idea if it worked or not. But we happened to catch Adam’s retirement speech, ‘cause he broke his neck, and it was moving, he just had such a presence. And so we thought okay, lets write this guy a part. A couple pages over a few episodes, see what it’s like, if he’s not so great then it’s okay, we tried it. But he was great to watch, and so we wrote him more into season two, and then three. It was great to watch him develop and he’s just the nicest human being. And one thing I can say is watch for him in the season finale.

What has been your favourite moment on set?

I’d have to say that my favourite moment was probably at the casting. All these women came in for the part of Audrey, 140 women, and I found myself falling in love with all of them. Not only were they beautiful women but they were all playing her in different ways. It was just amazing to watch this character come to life in front of me. And then there was the online reaction to this character. People giving opinions on this character I had created like, ‘Audrey would never do that!’ It’s crazy. She’s not my character anymore, of course. She’s everybody’s. I mean, Emily Rose just made her her own. And then you’ve got Nathan and Audrey. They are just such an unconventional love story. You don’t usually see this on TV. They don’t hide things from each other, they are honest, and work together. It’s really amazing to watch.

You guys seem to be a pretty close knit team.

The actors live in Chester, Nova Scotia. It’s a beautiful place, between April and September, and the nearest city, Halifax, is an hour away. They are usually working 12 hours a day; Emily is called for hair and makeup 2 hours before, so she’s working 14 hour days. So they are all close in this town spending a lot of time together. Emily’s husband is over in the States, so is Lucas’ wife and kid, they visit of course but then they have to leave again and it’s just them.

Haven’s resident journalists, Vince and Dave, have both got Twitter and over the season break, there’s been a storyline running through the use of the social network. Tell us a bit about it, can we expect to see it again?

It was so much more successful than I could have imagined. It was hard to get funding for because that sort of thing, you can’t really measure it. It’s great, because it’s allowed us to create a much larger storyline. Me and Jim laid out the whole story, others then wrote it and we rewrote it. Everyone involved on the corporate level has said it’s been very successful. It is like a writer’s dream come true to be able to give more to these seemingly minor characters. And it’s great for the hardcore fans because we can give them a lot more that we can’t necessarily offer in the show, because we have to make sure we don’t exclude the more casual viewer by delving into too much background. We are hoping to be able to continue it.

Tell us a little of what to expect this season?

This season we’ve got the new characters; we’ve got Tommy. And who was that guy in the body bag? He’s someone you know. Everything is finally coming together, the Colorado Kid we don’t know much about, but it is coming together. I really like it when people try and piece things together. I often check in online to see what’s happening, to see what people are saying. I particularly like it when fans disagree with people because I know that even if they figure out one piece of the puzzle, by the time the finale rolls around, they won’t know everything that is going on.

My wife has no idea what’s going on. It’s nice to watch it with her because it’s like watching with fresh eyes. I watch her laugh at a bit I don’t remember is funny, or jump at a bit I forgot is scary. And she doesn’t like to know what’s going to happen. She asked me the other day ‘What’s going to happen in the season finale?’, and I said, ‘There’s a cut of the finale on my computer, all you have to do is go on it, go into my downloads and you can see it.’ She wouldn’t.

Will there be a season 4?

That’s up to SyFy, but I hope so. We’ve been moved from a summer show to a fall show which is a lot harder of a slot to compete in, but our ratings keep going up.

Finally, if you had to have one of the ‘troubles’ that we’ve seen, which one would it be?

That’s a good one. I mean, we created the supernatural aspect
and the troubles ages ago, before Heroes ever aired, and then obviously Haven happened. It forced a long conversation between me and Jim. We asked what’s different between a power and a trouble, and we decided that a power is something you want, a trouble you don’t.

For a trouble I’d have, I think I’d have to say where everyone loves you, like what Jason Priestley [‘s character] had. It was interesting with him, because he got it from his father, who obviously revelled in it. But then there’s this trouble that people would maybe like to have and you give it to the guy who absolutely would not want it.

Seasons one and two are available on DVD and season three is currently airing on SyFy UK on Tuesday’s at 9pm.