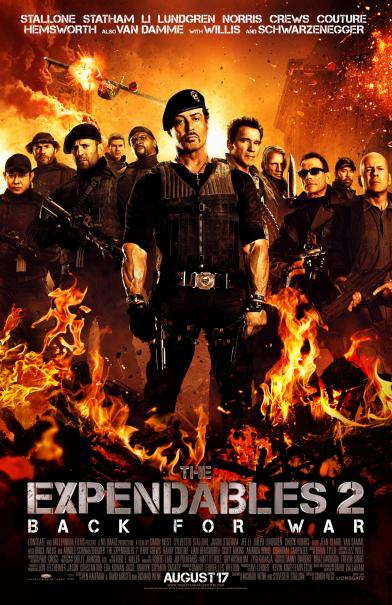 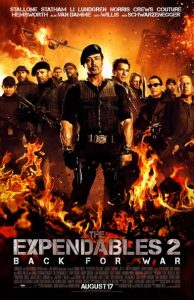 It seems pretty silly that I’m doing a review of Expendables 2 even though I’m yet to see the first one. I didn’t go into this expecting anything amazing; in fact this film was a second choice. However it did surprise me, and I left the cinema dying to see the first!

So straight to the point: this movie was all about over the top macho action, blood splatters all over the place, and some great nostalgic nods to the past. If you are into this you will have a great time. If you are expecting a movie that is meaningful and deep, with plenty of character development and soppy romance then this really isn’t the film for you; try The Vow if you are into that.

Bruce Willes plays what seems at first to be a villain, Mr. Church. He enlists the Expendables to take on a seemingly simple job. The task is owed to him by Barney as they have some unpaid debts, so he gathers his band of old-school mercenaries and sets off to collect a map device. But things go wrong and one of their own is viciously killed, which I believe was a huge mistake, as when I saw this actor in the film, I instantly sat up on the end of my seat. However, this stunning specimen of a man gets a knife rammed in the heart not far into the film, so don’t get too excited. The Expendables are then compelled to seek revenge in hostile territory where the odds are stacked against them. Note all foreigners bar the actual Expendables are enemies in this film, which I thought was pretty comical.

The Expendables 2 does exactly what you expect it to do – mindless action and great camaraderie. Trust me when I say it is awesome. The body count is insane and I was often giggling to the comedic deaths and uncountable blood splats. The movie is as deep as a puddle and the plot is almost nonexistent. It really is an easy watch; having said this, it’s jammed back with action and witty dialogue from start to finish, and you can’t help but get swept along in it all. This movie is worth a watch purely for the action scenes and special effects these are what make it so good. The opening sequence and the scenes in the airport towards the end are a major highlight – not to mention Stallone taking on Van Damme is a bit of a treat.

Stallone, Statham, Lundgren, Terry Crews and Randy Couture are all back and the chemistry between the central Expendables really makes this movie what it is. The banter between the group provide some of the best comedy moments in the movie – Stallone and Statham have a particularly great relationship. There are bigger roles for Bruce Willis and Arnold Schwarzenegger, and it’s great to see them team up with Stallone and kick some ass towards the end of the film. These great action movie legends all together allows for some great nod backs to their most famous movies, such as Die Hard, Terminator and Rambo all getting hilariously referenced.

The Expendables 2 is a movie that you can just kick back and enjoy, and marvel in it’s over the top ridiculousness, which is what makes the film what it is.