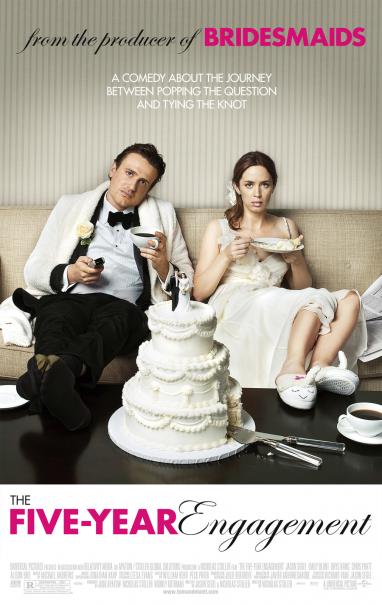 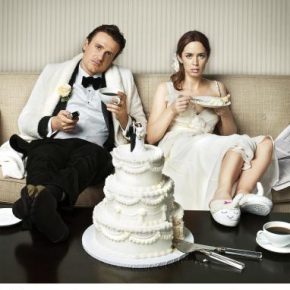 The Five Year Engagement is the latest offering written by and starring Jason Segel alongside co-star Emily Blunt released in the UK on 22nd June. Co produced by Bridesmaids producer Judd Apatow, The Five Year Engagement follows the lives of couple Tom, an up and coming chef and Violet, a British research student in experimental psychology. After a year of dating, Tom proposes to Violet and the two have to face the pressures of an upcoming wedding. More pressure is then added after Toms best man Alex (Chris Pratt) and Violets sister Suzie (Alison Brie) quickly get married after they find out they are pregnant after a one night stand.  This along with pressure from parents, work and everyday relationship doubts force the couple to really discover if they are 100% right for each other.

As well as starring Jason Segel and Emily Blunt, Rhys Ifans co stars as Violets university professor and when the three are together, the comedy is great. Chris Pratt who plays Segels laddish best friend also brings a lot of laughs and is paired well with his on screen wife Alison Brie. The comedy in the film is great and is spread throughout the film well. For a two-hour film, the comedy is never really lacking and is spot in when it is given to the audience. The overall feel of the film is lovely and is your typical rom com which will really attract fans of this genre.

The downside to this film is its length. For some reason the film is over two hours long and it does feel too long. The run time for the film is 2 hours and 4 minutes and even though the comedy is there and you like the characters, you sort of get the point after an hour and a half and kind of want it to end.

Overall The Five Year Engagement is a loveable film with loveable characters and an underlying storyline that I’m sure a lot of couple can relate to.  The comedy hits the right spots and the casting is good but ultimately the length of the film lets it down.