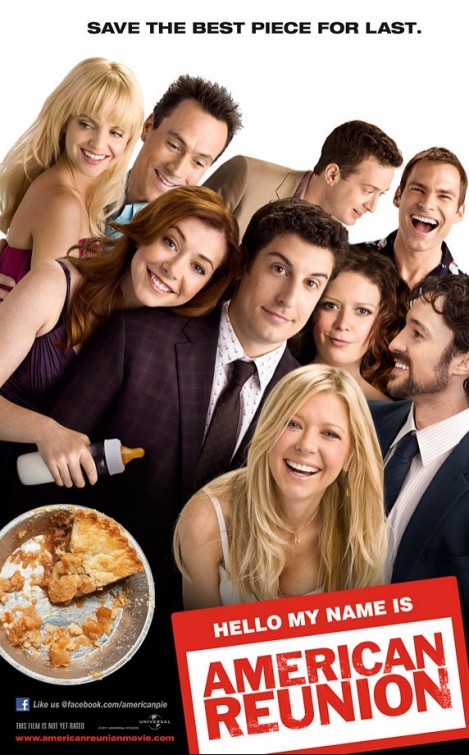 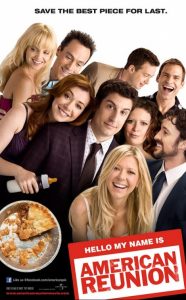 American Reunion is the fourth instalment of the original American Pie series and the eighth film for the American Pie Franchise. American Reunion brings audiences back with the original cast thirteen years after they have graduated high school when they gather for a ‘Class of ‘99’ reunion and a weekend together. Instead of people being intimate with apple pies, the storyline has moved on to depict the frustrating relationship problems of parents Jim (Jason Biggs) and Michelle (Alyson Hannigan) and the frustration of being boring adults who have day jobs and relationships to maintain. When we meet the rest of the cast, their lives aren’t perfect and this American Pie instalment tells the story of a group of adults who simply cant be satisfied… in more ways than one.

For this film, all of the original cast are back. Seann William Scott reprises his role as Steve Stifler, Chris Klein is back as OZ, Eddie Kaye Thomas as Finch and it wouldn’t be an American Pie film without Eugene Levy as Noah Levenstein, a.k.a Jims Dad. Other characters back include Kevin Myers (Thomas Ian Nicholas), Vicky (Tara Reid), and Stiflers Mom (Jennifer Coolidge). This is the fist film that all of the original cast have been together in since American Pie 2 in 2001.

As an American Pie fan I was genuinely looking forward to reliving my teenage days watching this group of funny guys back on the big screen. American Reunion is funny and there are some great laugh out loud moments but I don’t think the film is as good as I expected. A lot of the jokes are recycled from previous Pie films and sometimes it felt like the writers where trying too hard to make this film great. It is clear that the cast have grown up and there is an attempt at a more grown up storyline but in all honesty it falls flat on its face. One minute you are watching Jim and Michelle be parents to their young son and the next, you see boobs, sex and bondage and any sense of adulthood disappears.

If you are a fan of the American Pie films then you will enjoy this instalment. This definitely feels like an American Pie film and that is great. It fits in with the franchise well and follows on from the previous films nicely. Seann William Scott and Eugene Levy are the stars of the film and in parts it often feels like a Stifler film. These two characters certainly got the most laughs. The soundtrack is also something to look out for. The soundtrack includes songs from Good Charlotte, Cobra Starship and Boyz II Men. 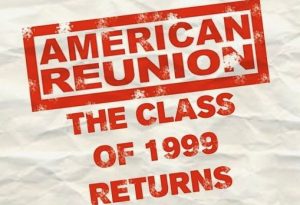 Overall it is funny and does make you laugh but it is questionable as to how much further this franchise can go.  The cast are getting too old to be playing these silly jokes and the storylines just aren’t developing enough to make you love these films. It seems that American Pie just wants to be the film that you love at 15 because it’s a bit naughty and explains your teenage angst.