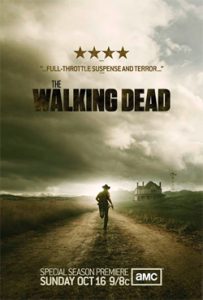 The second season of AMC’s The Walking Dead has certainly had more ups and downs than a rollercoaster; events have rocked between fast paced, nail biting tension, shocking, emotional twists and far less endearing moments of inertia and stagnation.

The extension from six to thirteen episodes, as well as the introduction of a new, apparently permanent camp at the Greene Family Farm, seemed to provide a golden opportunity to explore the human side of the apocalypse. Whereas season one appeared solely focused on the fight for survival against the constant presence of the undead, the increased length of season two would allow writers to develop the characters and examine the moral questions and repercussions that this constant struggle to survive would bring.

And whilst this certainly seems to have been the intention, I can’t help but feel that the writers fell somewhat short of the mark. Despite having a cast of over fifteen characters, little to no effort was made to develop the majority of them; characters like T-Dog and Patricia exist as non-entities, lacking any decisive action or even dialogue, making me wonder why they are there in the first place? For me it feels like the writers have really struggled to create strong, interesting, or even just likeable characters. Lori in particular has been a source of controversy; not only is her attitude to gender roles incredibly sexist, but she is so erratic in her views and behaviour regarding Shane and Rick that she is often hard to follow, and almost impossible to understand. And the less said about Carl the better.

Nevertheless, when the writers got the characterisation and story arcing right they got it spot on.  Their divergence form the canon of the comic books has been refreshing, for me, series antagonist Shane Walsh (who was killed off six issues into the comics) stole the show, his rapid downward spiral into primal survival mode allowed an intriguing exploration into the psychological effects of the breakdown of civilisation. His compulsive and totalitarian approach to the apocalypse drove the bulk of the interpersonal conflicts; his constant clashes with Dale and Rick surrounding the murder of Otis and inevitable fate of Randall were brilliantly brutal, and provided the backdrop for the key questions of the morality of survival.

But one thing that I feel really sets this show apart from the random maiming and carnage of your usual zombie film is that it is capable of being poignant and emotional. Dale’s death was both completely unexpected and heart wrenching, demonstrating the powerful reactions that can be evoked when the writers take the time to properly invest in a character. Scenes such as Dale’s horrifying death clearly illustrate how the series has gone strength to strength in delivering the gruesome action sequences that define the zombie genre. Regardless of the internet trolls who ridicule the ‘amateur’ special effects, I think this season has had some of the best gore on TV; the walker who ripped his face apart clawing through the windshield of Lori’s wrecked car, and the walker whose head was so delightfully and revoltingly squashed beneath the wheels of the getaway car have provided memorable talking points and a triumph in digital effects.

The farm setting has gotten a lot of flack for being the cause of stagnation within the show, but I’m more tempted to point the finger at the massive pacing problems that dogged this season as a result of the hiring and firing backstage. Whilst I feel the Walking Dead is still falling short of its true potential as a result, season 2 made compulsive viewing, and I have high hopes for the future. The dramatic step up in action and number of plot threads after Glen Mazzara’s take over as show runner has made me even more anxious for season 3, Rick’s ominous declaration that “this isn’t a democracy anymore” looks like the dawn of a new era for the show, the new ‘ricktatorship’ and the introduction of the eagerly anticipated characters of the comic book, will hopefully guarantee that season 3 will be even more turbulent and thrilling.