Review: Wrath of the Titans 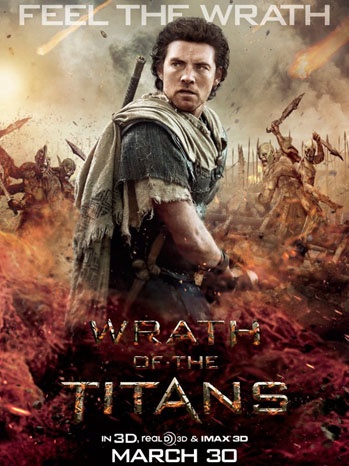 The sequel to Clash of the Titans, Wrath of the Titans is set ten years later where we see demigod Perseus (Sam Worthington), slayer of the Kraken and son of Zeus, living a quiet life with his young son Helius as a fisherman after his wife sadly died. One night, Zeus (Liam Neeson) visits Perseus asking for his aid in stopping a horrific prophecy coming to pass. With mankind moving away from the Gods, they’re beginning to weaken, losing their powers and becoming mortal themselves. This has triggered the walls of Tartarus, the Titan prison located in the Underworld, to weaken, therefore allowing the inevitable escape

of Kronos and the rest of the Titans. Perseus however denies Zeus’ request in order to remain with his son but quickly changes his m

ind when it becomes clear that the prophecy is starting to play out. Perseus soon finds himself on a journey with old friend Queen Andromeda (Rosamund Pike) and Poseidon’s demigod son Agenor (Toby Kebbell) to stop the Titans from destroying mankind itself.

Although Clash of the Titans seemed to disappoint most of its audience, it didn’t disappoint me. Maybe it’s my love for Greek Mythology and action movies, but I found the movie entertaining and watchable, though not an Oscar winner by any means. The same opinion goes for Wrath of the Titans, though I will admit that I found it more enjoyable. The CGI in the sequel was much better than it’s predecessor, where Medusa looked like something you would find on a video game rather than in a Hollywood movie. However, in Wrath of the Titans, the CGI was used fantastically, especially with the monsters such as the two-bodied demon soldiers, the Chimera and Kronos and my only quibble with it was that something more could have been done with the Minotaur, which didn’t live up to my expectations.

The cast were fabulous as always, with Liam Neeson and Ralph Fiennes, as Hades, being at the top of the list of course. However, one character who I didn’t suppose I would like so much was Agenor, played by Toby Kebbell, who brought to the role a twisted sense of humour and wit which was immensely enjoyable and lightened the mood of the film when needed.

While the film dragged in some places and felt rushed in others, it was still in my opinion an action packed movie to watch although the ending wasn’t what I thought it would be and seemed a little unrealistic, in mythology aspects. Anyway, if you’re sitting on the fence about seeing it, best wait until it comes out on DVD or rent as an ideal way to pass the time considering it’s only about an hour and a half long, but if you do decide to see it whilst it’s in cinema, be sure to see it in 3D. The action scenes are well worth it.