One Tree Hill: The End of an Era

After nine seasons, 184 episodes, three weddings, six births, three psychos, three murders and one suicide One Tree Hill is about to air its final episodes.

The Show debuted in the US in 2003 and has attracted millions of viewers. Originally One Tree Hill followed the lives of half brothers Lucas (Chad Michael Murray) and Nathan (James Lafferty) living in the fictional town of Tree Hill, who compete for positions on their school basketball teams. Their relationship then evolved form soulless enemies to loyal siblings. The audience was then taken through the whirlwind romances of Lucas and Peyton (Hilarie Burton), Lucas and Brooke (Sophia Bush) and Nathan and Haley (Bethany Joy Galeotti). By the time the show reached season five, creator Mark Schwan decided to jump four years ahead in time to show the characters lives in college and by the start of season seven the show had jumped another fourteen months ahead of time.

After six seasons, it was announced that Chad Michael Murray and Hilarie Burton would not be returning to the show therefore season six would mark the last time that the original cast would be together. Arguably seasons seven and eight where the less popular of the shows run. It seemed that the writers had begun to recycle old storyline instead of bringing in new stories. Storylines such as the psycho Derek storyline from season four where reused in season six with the introduction of Nanny Carrie. The idea of reintroducing Karen’s Café in season eight also seemed problematic as it looked as if the show was trying to revert back to its old ways. 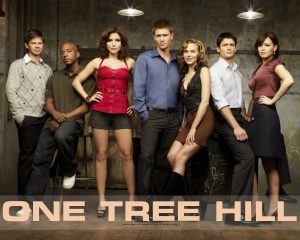 Season Nine began on its English home E4 on 5th March 2012 and is a thirteen episode long season. As someone who has previewed the current season it is easy to say that One Tree Hill is back on form and season nine can be looked at as another great season. With more twists and turns, the death of an important character and the return of a missed character, the writers are giving its audience the opportunity to go out with a bang. It will be a sad day when One Tree Hill ultimately finishes and the CW has already announced that there will be a two-hour season finale (it is unknown if this will also be shown in the UK) with cast and crew reminiscing over the past nine years.

One Tree Hill has been a loved show and has reached audiences of up to 4.3 million and even though it’s the end of its TV run, fans will be able to relive the show via DVD. The ending of the show is the end of an era and fans around the world only need to remember one thing…..there is only One Tree Hill.