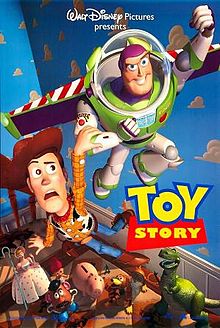 A breakthrough in CGI Animation, ‘Toy Story’ is as entertaining as it is innovative. 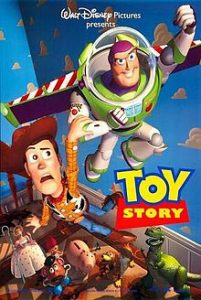 Anticipation has swirled around Walt Disney’s latest release, ‘Toy Story’, for a long time prior to its debut in cinemas.  Not only is it Pixar’s first full length feature film, but also the first to be created entirely from CGI Animation.  However, despite the magnificence of its technological advances, it is the other elements of the film that make it truly special.

The story follows the life of Woody, a pull-string cowboy doll voiced by Tom Hanks (Sleepless in Seattle, Forrest Gump).  Alongside the fellow toys, Woody comes to life when their seven year old owner Andy is not around. The film depicts the social hierarchy of the toy chest, and how the most played with toy becomes the natural leader. Woody’s status as the most popular is quickly challenged with the arrival of Buzz Lightyear (Tim Allen). A ‘space-ranger’ action figure, Buzz is unwrapped as a present on Andy’s birthday. He lives under the impression that he is a real action hero that has crash-landed into the bedroom from the stars.

As the film develops, the audience witness the increasing rivalry between Woody and Buzz, and their battle to return to Andy’s house after they fall out of his car when his Mum pulls over at a petrol station.

It is Toy Story’s simple storyline that allows its characters to shine. Rather than their personalities becoming lost behind a complex script, the writers successfully create a simple but well-formed plot with charm and sincerity, therefore appealing to a wide audience. All of the characters bear a brilliant likeness to humans, yet still gleam with individuality. Rex the dinosaur holds an excitable nature, and the anxiety that Andy will find another, scarier dinosaur to play with. Mr Potato-Head on the other hand is outspoken and sarcastic.

It is this attention to detail that gives the characters a genuine spark, originality, and authenticity, something that is perhaps missing from many other animated films. The believability of the characters bridges the gap between human viewer and toy, making their world accessible, and something the audience can sympathise with.

Other elements of the film are similarly iconic. Randy Newman’s contribution  to the soundtrack, ‘You’ve Got A Friend In Me’ played in the opening scene,  captures perfectly the platonic bond between a child and their toys. On the other hand, the character of Sid, voiced by Erik Von Detten, is the menacing antagonist of the film. The contrast between his violent nature, to Andy’s caring attitude is aptly displayed, leading an action packed and highly inventive final plotline.

With its fantastic mix of innovative CGI Animation, a well-constructed plot, and excellent voice-overs, Toy Story is undoubtedly a future classic. A lesson to anyone that has ever mistreated their toys, it will be loved to infinity and beyond.