Blinded By Our Own Christmas Decorations 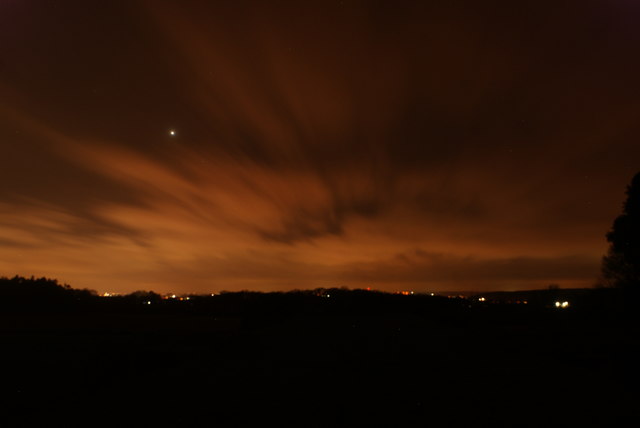 Christmas movies and cartoons alike tend to paint an idyllic scene of Christmas Eve, with a town lit up by Christmas lights and Santa’s sleigh passing through a sky full of stars. Unfortunately, the reality is not as picturesque. Light pollution, the brightening of the night sky due to obtrusive, excessive, or misdirected anthropogenic sources of light, may not be our top priority when considered next to climate change or chemical trash dumping, but it is still keeping us from enjoying a view of the stars. The problem of light pollution increases exponentially during the holidays, when lights and decorations are on full display, and has impacts on wildlife and human health.

Appreciating a pristine dark night sky is not the most common occurrence, but it has been known to happen when hiking at night in a national park or when you get back to your small town after a trip to a big city. Colloquialisms, like ‘the city that never sleeps’, portray our general acceptance of the near constant presence of artificial light in cities, regardless of time of day. But this situation is not solely limited to the big city anymore; rather, man-made sources of light are increasingly brightening the night sky in rural areas in the UK. It has been estimated that light pollution has increased roughly 24% in the last ten years in the UK, and now only 22% of the UK has pristine dark skies.

This may just seem like the next logical step in modernization. Maybe it’s a sign that we are moving closer and closer to completely urbanizing our way of life, with every road in the UK lit up with adequate light, towns with no dark alleys to be found, and cities that can be seen from space. But have we stopped to consider what this loss of natural dark skies is doing to the environment? It should be acknowledged that advocates are only seeking to reduce artificial light that is excessive or unnecessary, such as outdoor lights that are on where not needed, or lights that are directed upwards for decoration and not practicality. Not only does the artificial light contributing to light pollution lead to an enormous waste of energy, it also affects ecosystems and masks our view of the stars. Light pollution can disrupt ecosystems, especially threatening nocturnal wildlife, such as by confusing migratory patterns and changing interactions between animals. Your neighbours’ extravagant light display may be festive, but it could also impact your sleep quality and suppress your body’s production of melatonin, potentially contributing to increased anxiety and headaches. The presence of light during sleep has even been linked to sleep disorders and disease.

This is not to say that you shouldn’t put up holiday lights or decorations, rather that you can make a few small adjustments to prevent further contributing to light pollution. Consider lighting only what you need, using warm white LEDs (light-emitting diodes) which are better for wildlife than the cool white and blue LED options and have the added benefit of being more energy efficient than fluorescent lights. Replace outdoor lights with low-glare fixtures or baffle lights, or go a step further and putting motion sensors on outdoor lamps. A significant and relatively affordable step that renters and homeowners alike can use to positively decrease their contribution to light pollution is to put holiday lights and decorations on timers so that they turn off during the hours when no one will see them anyway.