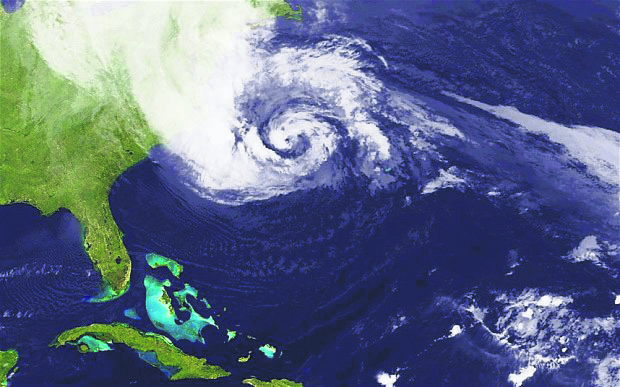 I’ve seen my fair share of storms and I’m not talking about your typical thunderstorm over the UK, I’m talking about the huge supercells that I was lucky enough to encounter during a storm chasing tour in tornado alley during 2010.

Baseball size hail, winds that will topple 18 wheelers and such heavy rain the wipers are useless makes you realise pretty quickly that we get it easy. However, compared to that Hurricane Sandy was on a completely different scale. At its peak Sandy was the largest Atlantic Hurricane on record spanning 1100 miles in diameter, enough to engulf the entire of the UK and Ireland and some. The storm caused nearly as much monetary damage as Hurricane Katrina at $65.6 Billion and left at least 253 dead in seven countries.

24 States were affected including the entire eastern seaboard from Florida to Maine but most of the damage was dealt in New Jersey and New York. A 14 foot storm surge hit on the 29th October flooding streets, tunnels and subways as well as causing multiple power cuts. So you would think, surely nobody would want to be anywhere close to this natural disaster?

Well storm chasers are called that for a reason. During tornado season towns are invaded by hundreds of chasers whenever there is a chance of tornado activity.

I met many chasers and was lucky enough to, not only see a few tornados but to also be guided by George Kourounis, one of the most famous explorers on TV. He presented the series Angry Planet which aimed to investigate and document the fiercest natural phenomena on Earth. He is a dedicated storm chaser spending the entirety of tornado season in the Great Plains every year. Later in the year he chases Hurricanes and this year encountered Sandy which was the 17th Hurricane he has documented. I was able to get back in contact with him and ask him about his experience. He explained the sheer size of Sandy saying “I was standing on the boardwalk at Rockaway Beach, Long Island and I was looking out over the angry looking ocean and I knew that within an hour or two, the winds were going to shift, and all that water was going to rush ashore, destroying much of the coastline. That’s when I knew it was time to retreat. The damage along the coast was comparable to other big hurricanes like Katrina or Ike, but was spread out over a very large area”. I also asked him about Sandy being referred to as a ‘Frankenstorm’, meaning worse than the sum of its parts. He thought “the term ‘Frankenstorm’ was actually quite appropriate because Sandy was made up of a blend of different weather systems, just like Frankenstein’s monster was made up of different human parts. The tropical system, amplified by the sweeping frontal system coming in from the west, plus a ridge of high pressure over Greenland, all contributed to the size, strength and westward shift that Sandy had. This right combination of elements, plus the highest tide of the month made for very damaging storm surge levels of about 14 feet”. So if you are thinking of trying something new next year, look up storm chasing. You won’t be disappointed.