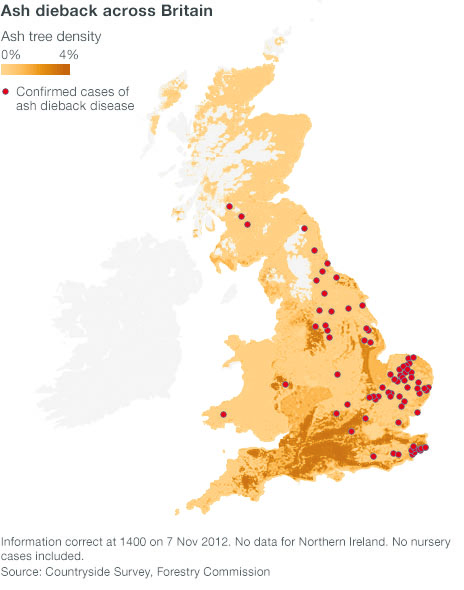 Common ash is the third most abundant native broadleaved tree species in Great Britain, its main environmental benefit is providing a diverse habitat for wildlife. In addition it has current economic uses such as flooring and barbecue charcoal.

Unfortunately due to a new threat from fungal organism ‘Chalara fraxinea’, first seen in Poland in 1992, several ash species are under threat. Infection results in leaf loss, crown dieback and ultimately death. Young saplings are at particular risk as individuals are killed within one growing season of symptoms becoming visible. Despite this mature trees are by no means safe because although individuals tend to survive initial infection they succumb after several seasons of exposure.

The first case in Britain was identified in February 2012 at a nursery in Buckinghamshire and was thought to be imported into the United Kingdom from Holland. Between October and early November ash dieback occurred in East Anglia, Essex and Kent. Current identified cases stand at 200 as is shown in the map.

As mentioned earlier the disease was initially imported into the UK. On the other hand it has been noted that spores can in fact migrate as airborne particles tens of miles at a time. This helps to explain how areas of the UK, which have had no recent contact with the pioneer regions, became infected. It is suspected that spores migrated across the channel on prevailing winds, from mainland Europe, of which many countries have reported issues.

As a result of the problems mentioned in the former on the 29th October the UK government decided to use emergency legislation in order to restrict imports and therefore reduce rapid spread. To add to this infected trees are being deforested and burnt.

‘Chalara fraxinea’ is of great significance to the environmental because as it stands, once an ash becomes infected it is impossible to cure hence why the disease has caused widespread concern throughout Europe. For example 60-90% of Denmark’s ash stocks were lost due to infection. The public are encouraged to prevent spread by washing walking equipment after disembarking from forested areas and reporting any signs of the disease, (identification information can be found at: http://www.forestry.gov.uk/chalara#Symptoms). This native highly biodiverse tree is too important to lose.